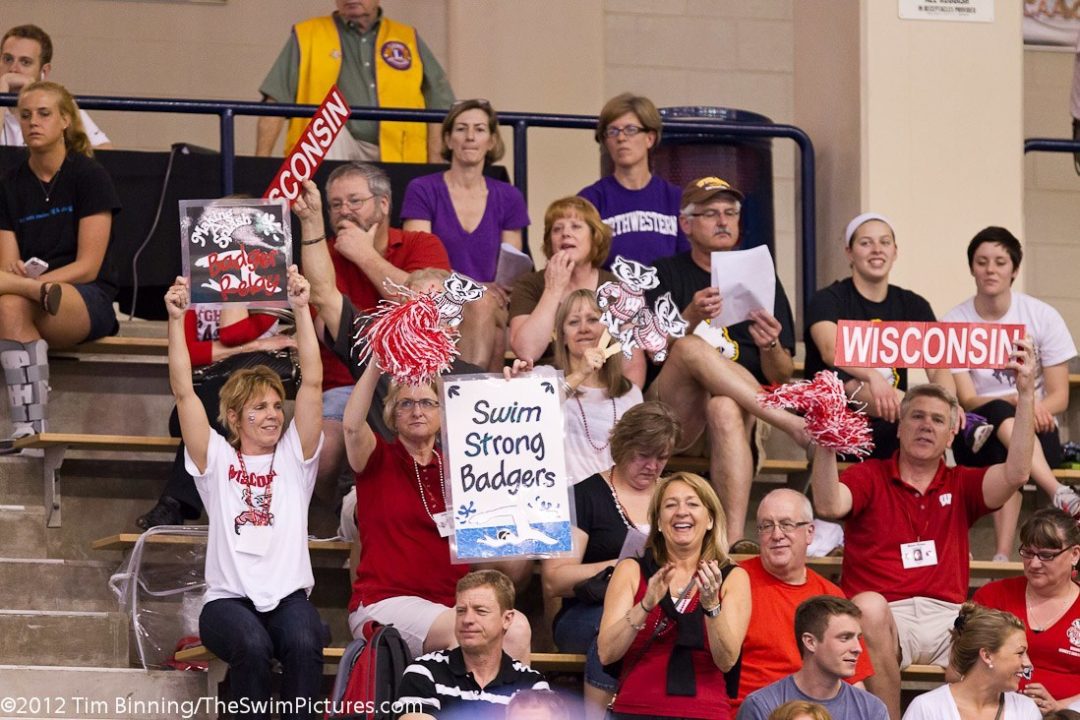 The Wisconsin men have matched their class from last year with two big signings in the class of 2013. (Photo Courtesy: ©Tim Binning/TheSwimPictures.com)

In what is arguably the biggest recruit yet in the Whitney Hite era (and certainly at least in the top group), Cannon Clifton from the Woodlands, Texas has given his verbal commitment to the Badgers for the 2013-2014 season. Alongside him, collegeswimming.com is reporting that Alexander Delakis has also pledged to the Badgers, giving Hite a strong 1-2 punch for the second-straight season.

The Badger men have some good pieces on their roster, most notably seniors Michael Weiss and Daniel Lester, but until now haven’t had that big-time sprint freestyler that can start to give their relays some credibility. Clifton gives them that, in spades.

He already has bests of 20.52/44.60/1:37.36 in the three shorter freestyles. There is only one returning swimmer, in all three of those events combined, who was faster than those marks on a flat-start last season, and that’s Weiss in the 200 free. Both the Wisconsin 200 and 400 free relays were 10th (last) at last year’s Big Ten Championships.

Clifton is also a 49-low in both the 100 fly and 100 back, plus a 1:49.20 in the 200 IM. He swims for The Magnolia Aquatics Club and the Woodlands High School. The are produces a ton of high level swimmers like NCAA Champion Michael McBroom at Texas, and Grayson Umbach – one of the top overall recruits in the class of 2013. Clifton is an example of a swimmer who was able to perform at a high level from age group through high school swimming: he still holds three Gulf Swimming 10 & under records.

Clifton should immediately help the relay situation, though Wisconsin will have to fill in some pieces around him after some big graduations last year and this.

That help comes in part in the form of Alex Delakis. He is a top-flight breaststroker from nearby Eau Claire, Wisconsin, where he swims for the Eau Claire YMCA. He has bests of 55.75 in the 100 breast and 2:02.44 in the 200 breast.

He will add some depth to a very small Wisconsin breaststroke group that next year will be senior-heavy. That includes swimmers like Tariq Miller and Alex Riegert. Miller’s flat-start best last season was only 55.32, but at Big Ten’s, he stepped up on the 400 medley relay with a 54.18 split. Combined with 2013 freshman John Bushman (55.8), this could develop into a great three-way battle for medley spots next season.

Nice to have another Texas swimming at UW. Exciting to see what Cannon will do next year there.

I also think Whittney ,the coach at UW is a hidden secreate that more poeple will know about in the comming years. That is why you will see more top recuits go where he is.

Having swum under Reese and coached under Bauerle, McKeever, and Busch, he definitely has some amazing experience. He was impressive in turning the Washington program around in the few years before they were cut. It seems he is now doing the same at Wisconsin another school with less than ideal facilities.

Congrats to Alex Delakis and UW! Great kid, who also has a lot of potential yet, too!!

Whitney is going places and swimmers are following. Certainly these two recruits know something most don’t! I thought Clifton would go UT, but it looks like he wants in on the action!