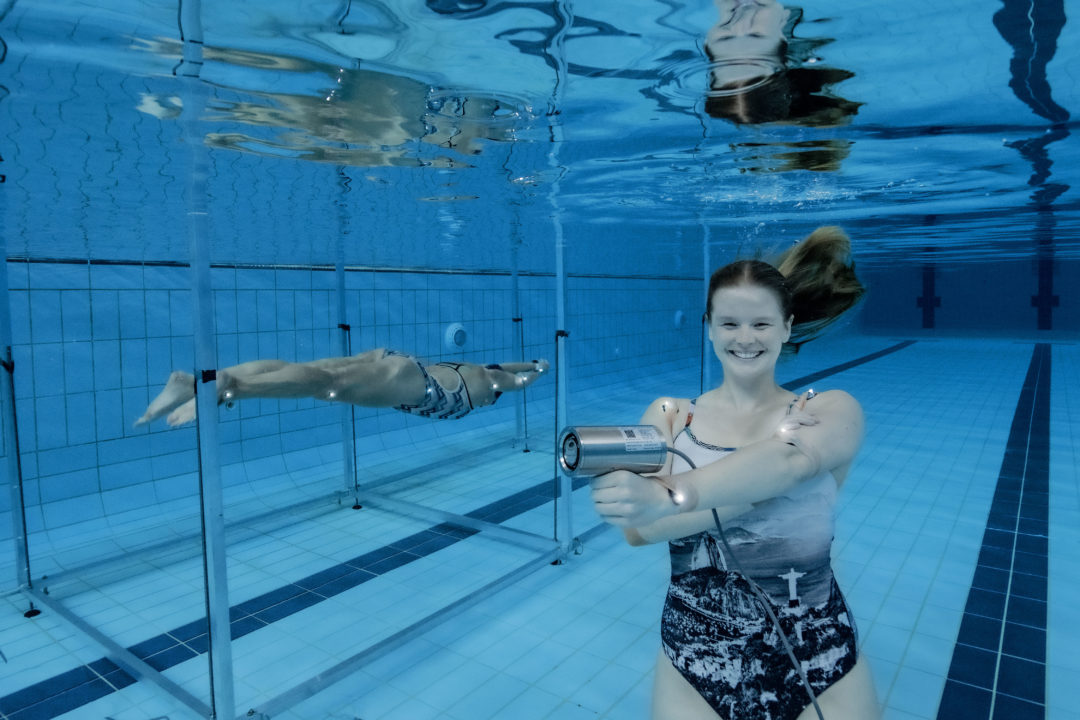 A BOND University researcher is deep-diving into the underwater dolphin kick that helped Michael Phelps become the greatest swimmer of all time. Current photo via Cavan Flynn

A BOND University researcher is deep-diving into the underwater dolphin kick that helped Michael Phelps become the greatest swimmer of all time.

Australian swimmers could weaponize Rani West’s Ph.D. against the US heirs to Phelps’ legacy as soon as the Tokyo Olympics next year.

The underwater dolphin kick – when swimmers propel themselves off the wall, traveling faster than any surface stroke – can account for up to 30 percent of the total distance in an Olympic race.

Phelps was a master at it but Ms. West believes there are still serious gains to be made.

“The whole reason I’m doing my Ph.D. is to not only encourage swimmers to focus on underwater swimming more during training but to explain why there is so much variation in their ability to perform the skill,” Ms. West said.

“With the level of competition increasing and technology advancing, winning margins are so slim you are talking about milliseconds.

“It is such a great area to do research on because any improvements make a huge difference.”

The research involves tracking and filming high-performance swimmers underwater at the Bond Institute of Health and Sport.

She then analyses data on a range of variables including the swimmers’ motion, propulsive force and physical attributes.

“There is a general understanding of the influence of kick frequency and amplitude on underwater velocity, but there is no research investigating the ‘organism constraints’ that may influence an athlete’s technique, such as their ability to produce force, or their anthropometry, range of motion or flexibility,” Ms. West said.

“The free-swimming phase is the most obvious area for improvement, so most research has gravitated towards improving that space.

“But there is a huge hydrodynamic advantage swimming underwater because wave drag is significantly minimized, therefore decreasing overall drag force and resistance.

“I’m not sure if swimmers realize how beneficial it can be to swim underwater, because it can often take a back seat when you’re exhausted during the training, where you’re being restricted of oxygen and having the exert a decent amount of effort to perform the skill.”

Ms. West hopes to have the data collection phase of her research complete by the end of the year, with the results used to help Australian swimmers optimize their performance at the 2021 Tokyo Olympics.

Dolphins are smart. Why not just ask them how they undulate?

Awesome. Would be great to develop a system to analyze individuals and advise them on the best type of dolphin kick for them based on tempo, depth, etc.

I feel like Gary Hall Sr is somehow involved with this study. I’ve heard that he’s the leader of scientific cult dedicated to spreading the truth about coupling motions, so maybe this is on off shoot by some of his rogue followers.