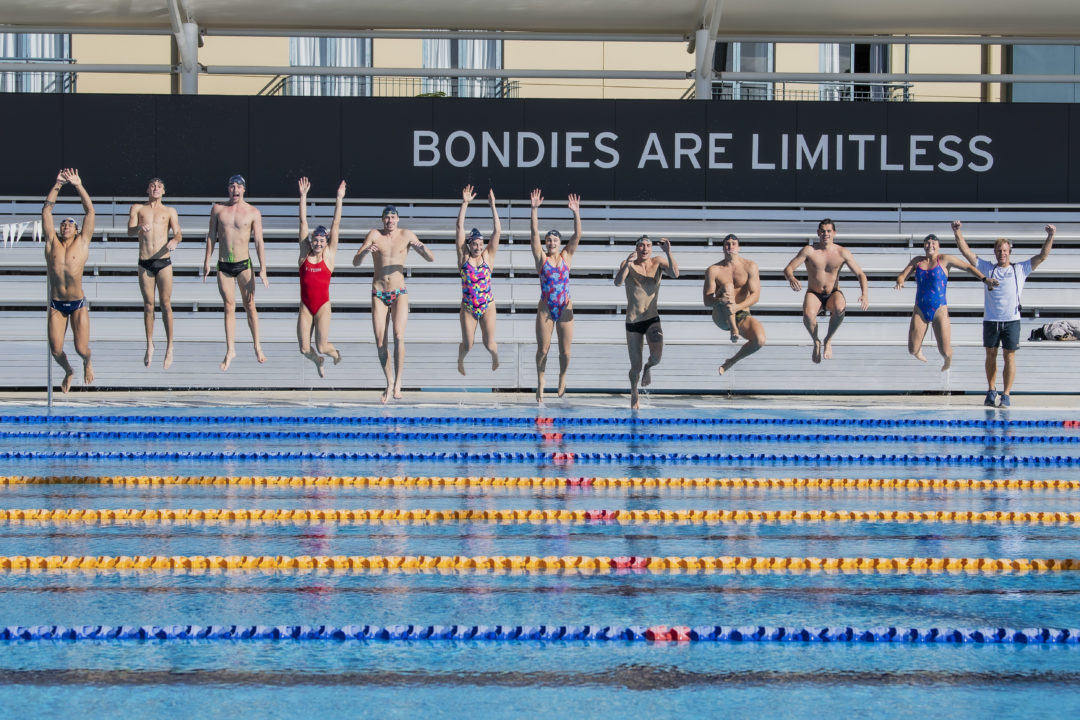 Bond’s elite swim squad trained together this week as a group for the first time since COVID-19 shut everything down. Current photo via Cavan Flynn

BOND University’s elite swimmers are back in the pool and already setting records.

The Olympic hopefuls trained together for the first time as a squad this week since COVID-19 forced them out of the water.

Head swim coach Richard Scarce was surprised at how fit his swimmers were when they returned to the water.

“You can see what it means to them to have their teammates around them, there is a really good vibe,” Scarce said.

“It’s great to be back in the pool and have the group back together. They have missed each other’s company and training together as a group.

“They were at full peak just before Covid, so they have stayed relatively fit swimming in the ocean.

“One of the girls posted a PB in the short-course 100 freestyle, Toowoomba’s Abigail Schoorl, and she hasn’t had any access to water for a while, so that was really impressive. It’s a credit to them staying fit and healthy during these tough times.”

The Bond University squad – which includes Australian Dolphins co-captain Alex Graham – will start competing virtually against other members of the Swimming Australia elite athletes from their home base at Robina.

“They had a little race yesterday in the pool, and the little competitions we can have brings some normality back,” Scarce said.

“We will be doing some virtual racing with the Swimming Australia crew across the country and post those times.

“November looks to be the first competition back. Queensland championships in December after that.

“It’s time to reset the goals and it’s only a year, trials for Olympics will come around really quickly.”

The reset also includes a new head coach of Swimming Australia with Jacco Verhaeren stepping down from his role and replaced with Rohan Taylor.

“We wish Jacco all the best, he has been a very calm coach over the years given his background and results, he did some very good work over the last six years,” Scarce said.

“We had some great team experiences with him and he’ll be missed.

“Rohan Taylor steps into the job, we’ve known him for many years, the feeling is that everyone’s work will come together and Rohan will challenge us and we’ll continue on.

“Everyone is pretty excited to continue the great work.”