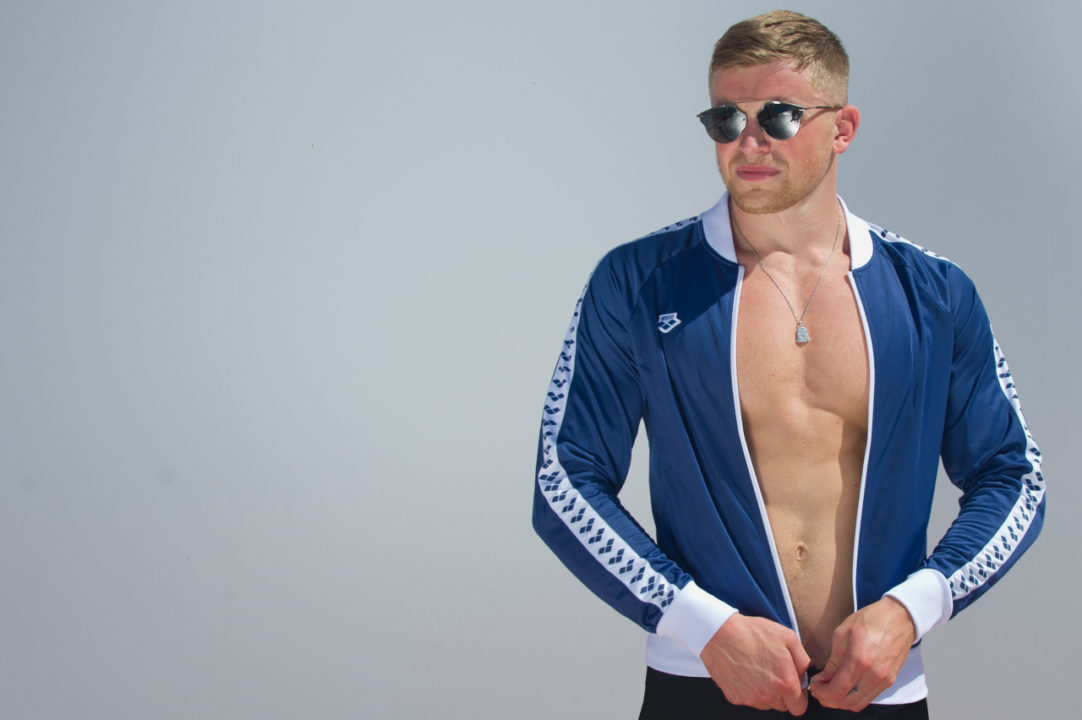 Olympic champion Adam Peaty of Great Britain is taking on a new challenge during these times of quarantine due to the coronavirus (COVID-19). Archive photo via Arena

#1 Adam Peaty Takes to the Bike

We’ve documented within our site’s ‘At Home Swim Training’ section how swimmers around the world are substituting all sorts of land-based activities for the work they normally do in the pool. We’ve seen everything from yoga to running to lifting and now Brit Adam Peaty is throwing cycling into the mix.

As posted to social media, Peaty says he will be competing in a virtual 100k ride to raise money for Great Britain’s National Health Services (NHS) Charities. The event takes place on Wednesday, April 8th and he’ll be riding alongside Commonwealth Games boxer Callum Johnson via the virtual racing platform Go Swift.

Peaty tweeted: “I’ve decided to join the 100km ride to raise money for the NHS Charities tomorrow @ 10am on @GoZwift. It’s a public and open event and would be great to have you ride with us!”

I’ve decided to join the 100km ride to raise money for the NHS Charities tomorrow @ 10am on @GoZwift. It’s a public and open event and would be great to have you ride with us! Fundraising page here: https://t.co/1BohrpyhJd pic.twitter.com/1tCMo8ko54

All-American distance swimmer Robert Ramoska has tested positive for coronavirus (COVID-19) and is now in the hospital, reports 247 Sports. Ramoska swam for the University of Alabama in the early 1980s.

‘After some rough days, including one in which an Emergency Medical Technician in the next room lost his life to the virus, Ramoska took a turn for the better,’ reads the report.

Per Ramoska’s LinkedIn profile, Ramoska’s road to success began in high school, where he broke the elusive 4:30 barrier in the 500-yard freestyle in 1978. Ramoska held the Illinois high school record in the event for 12 years.  Also achieving honors as a two-time Junior National Champion, Ramoska represented the United States in two international competitions in Hamburg, Germany, and Caracas, Venezuela.

Ramoska is now a medical and surgical podiatric doctor in the greater Chicago area.

A founding director of the Antigua and Barbuda Swimming Federation (ABSF) named Carl Joseph has died at the age of 39. Per The Antigua Oberservor, where Joseph was also a reporter, he died unexpectedly on March 28th.

“On behalf of the entire swimming fraternity, I would like to extend deepest sympathies to Elisabeth, his daughter Alyssa, Carl’s entire family and his loved ones,” said ABSF president Dr. Derek Marshall.

“The sad and unexpected news of his passing has left everyone in a state of shock, and I ask that we all include them in our thoughts and prayers during these difficult times.”

“Carl was instrumental in keeping the discipline of open water swimming alive and well in Antigua and Barbuda,” he said.

“The Marlin swim club continues to contribute to keeping open water swimming alive and growing. His legacy in swimming is cemented in the achievements of his swimmers and the many persons who he has taught to swim. My deepest sympathies go out to his family,” Wall added.

In collaboration with the Australian Olympic Committee (AOC), the Royal Australian Mint has released its official collectible Olympic coins. A 2020 $1 Colored Frosted Uncirculated Coin depicting a volleyball player is included in the offering, as is a 2020 50c Round Gold-Plated Uncirculated Coin that showcases the 5 new sports set for the 2021 Games, including karate, sports climbing, surfing, skateboarding and baseball/softball.

Australian Olympic Committee (AOC) CEO, Matt Carroll endorsed the release stating “The AOC is appreciative of the support of our partner the Royal Australian Mint.

“We are thrilled to see these special coins in the market right now to recognise the continued efforts of our athletes as they strive to keep their dreams of Tokyo alive. While the journey is now a little bit longer, our Australian athletes tell us they have Tokyo in their sights for 2021”.

You can view the coins here.

The Cyprus Swimming Federation has confirmed that the Comen Cup slated for June 19th-21st in Kavala, Greece has been cancelled due to the coronavirus.

Per the message posted on Facebook on April 2nd, ‘The Bureau of Comen, after serious consideration fo the global pandemic of the coronavirus over the last ten days, ahs decided to cancel the following events of the 2020 Comen Program:

– Members Meeting in Budapest – May 9

The post states that the bureau is considering the possibility of rescheduling these events for later dates if the present conditions improve and allow such rescheduling.

Proud of you.
THIS Will help your 200 Breast strk.