Beyond The Lane Lines: Michael Phelps Ranked #1 Outside The Water 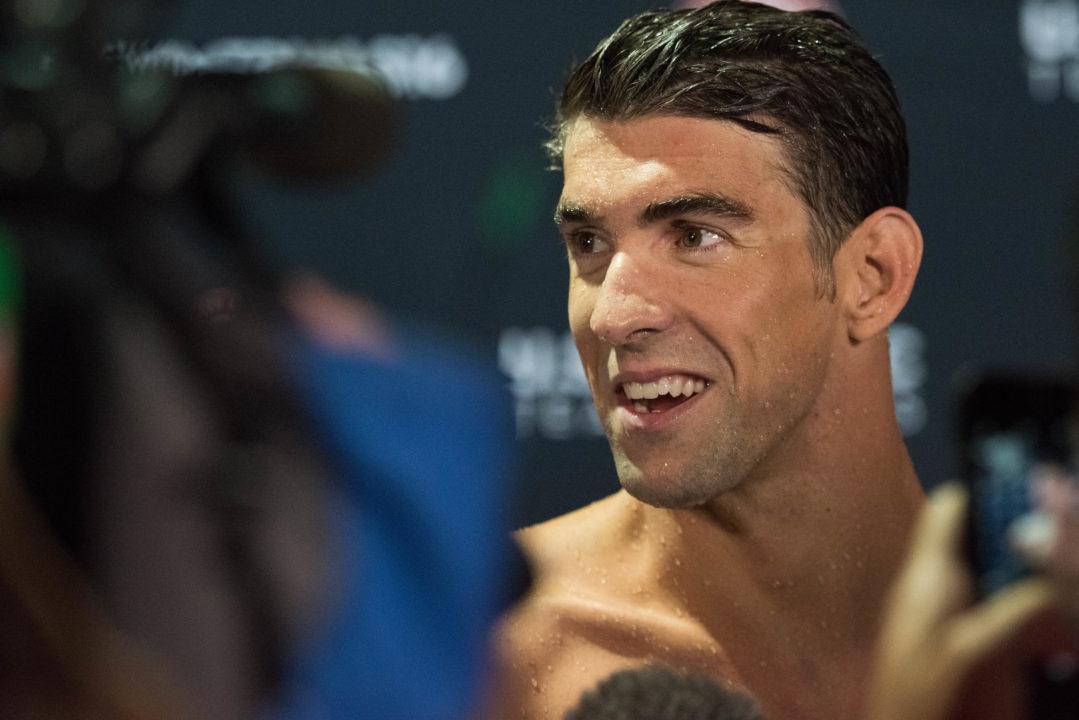 Olympians Michael Phelps and Daiya Seto are among the swimming stars highlighted in this edition of Beyond the Lane Lines. Archive photo via Mike Lewis/Ola Vista Photography

Olympic icon Michael Phelps is used to seeing his name in lights for his aquatic prowess, but the 34-year-old father of 3 is continuing to make a big impact on the world in the realm of mental health advocacy. Earlier this year he was honored with the Morton E. Ruderman Award in Inclusion and now he has been slotted #1 on PR Week’s list of Health Influencers.

Phelps is heavily involved with the online therapy system Talkspace, which offers on-demand consultations of which 1 million people have used to date. CEO and co-founder Oren Frank says of the 23-time Olympic gold medalist’s impact on the company’s initiatives, “It really is a labor of love. Michael does not get paid for his involvement, he’s actually a partner. He wants to be part of what we’re doing and not just a paid spokesperson.”

Frank notes Phelps makes people think, “If this guy struggles with this and does something to actively counter it, maybe I should do the same.”

“He’s doing an incredible service to everyone he meets and we are able to feel it,” he adds. “You can see the same dedication, commitment and tenacity he used as a swimming champion in how he applies that to mental health.”

Tokyo 2020 Olympics-bound coach Mel Marshall is among those shortlisted for a national coaching award. The coach of Adam Peaty at Loughborough is a finalist in the UK coaching High-Performance Coach of the Year award, one of twelve categories in which a winner will be announced during a ceremony at The Tower Hotel London on Thursday, December 5th.

Of her nomination, Marshall said, “It’s a real honour to be nominated for the UK Coaching Awards, but it is recognition of all the hard work which goes behind the scenes from the entire staff team at British Swimming.

“I’ve had the pleasure to work with some of the most talented swimmers of our generation, and it is their commitment to achieving their best which inspires me to coach.

“I see how our athletes are inspiring young people to take up swimming and being involved in the England Talent Coaching programmes gives me an opportunity to see that first hand.”

Danielle Brayson, who coaches teenagers at the City of Glasgow Swim Team, has also been shortlisted in the Talent Development Coach of the Year category.

Swimming Australia has announced the criteria and qualifying times for its Junior Excellence Program, an initiative designed to recognize performances of swimmers aged between 9-13 years-old. Times swum between May 1 of this year and April 30 of next year will be deemed gold, silver, bronze or blue standard-worthy, based on the qualifying times achieved.

The standards are based on times raced at this year’s World Junior Swimming Championships.

Per Swimming Australia, the Junior Excellence Program was established in 2007 to recognize, reward and incentivize junior swimmers who are on a key part of their swimming journey, learning and refining as they develop into senior swimmers. Each year Swimming Australia releases the JX criteria and standards for the forthcoming season which swimmers, parents, and coaches can use to as targets throughout the year.

Seto recently took home 2 gold medals at this year’s World Championships, earning an automatic berth on Japan’s Olympic roster with his performances. The 25-year-old dad was selected partly for this reason, but also because he ‘expresses gratitude to family members and his mother who have supported his achievements so far.’

Of his selection, the ANA athlete stated, “I am very honored to be appointed as the “Thank you, Mom” campaign ambassador for P & G Tokyo 2020.

“I am deeply grateful to my mother who has supported me since I was a child that I have been able to continue my career as a swimmer and have qualified for the Tokyo 2020 Games. Also, in my private life, I had a girl last year and I realized how big a family is. I hope that this campaign will make many people realize their gratitude to their families and mothers.” (CNET)

All hail our king