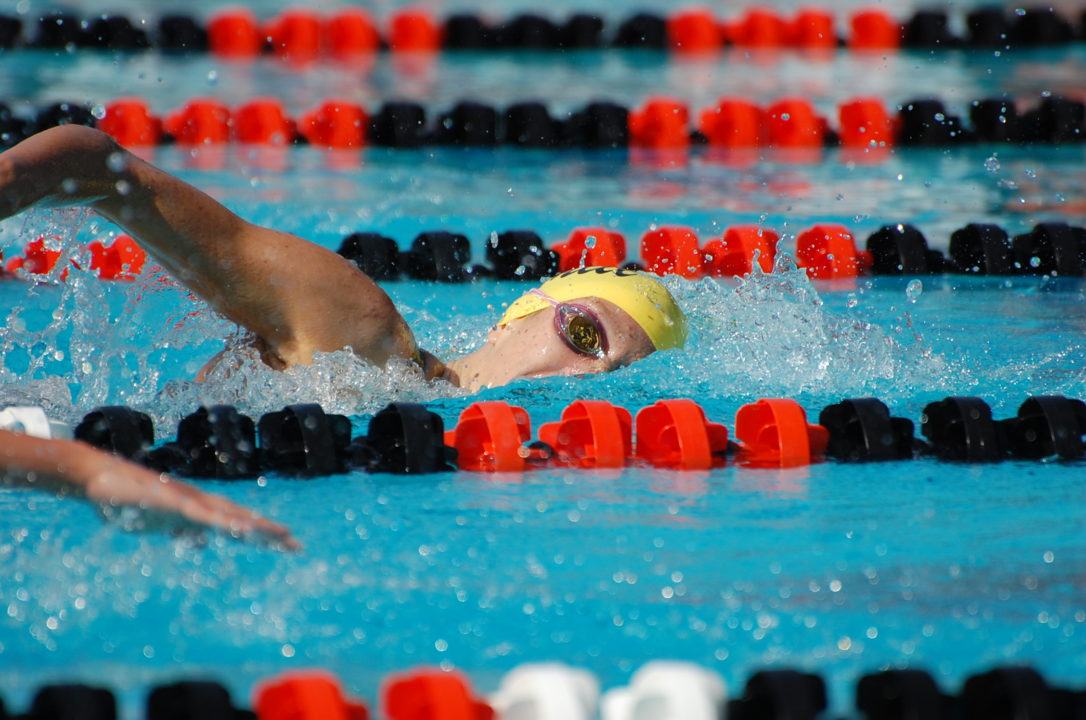 Samantha Pearson (above) from Foothill High School swam lifetime bests in the 200 IM and 100 back. Archive photo via Anne Lepesant

Orange County swimmers turned out in force last weekend for the 46th edition of the Foothill Swim Games in Santa Ana, California. The meet is a major precursor to league championship meets that begin in less than two weeks.

Santa Margarita dominated the girls’ meet, winning 8 of the 11 swimming events on offer. That included a freestyle double from sophomore Ella Ristic, who won the 200 free by more than two-and-a-half seconds in 1:48.14, and later added a win in the 100 free with a 50.28.

Among the non-Santa Margarita wins came a pair from Foothill sophomore Samantha Pearson. Her first win came in the 200 IM, where she swam a 1:59.27 that’s a new lifetime best for her and faster than the time that won the SS-D2 championship meet last year. She also won the 100 back in another lifetime best of 54.00.

Other Key Swims from the girls’ meet:

The Northwood boys opened up an early lead thanks to wins in the first two events in the meet, part of 4 total event victories for them on the day.

Two of those four wins were individual events by the hands of senior Columbia commit Shawn Lou. His first win came in the 200 free in 1:37.95, which cuts about two-tenths from his previous lifetime best. He came back later in the day with a second lifetime best, this time in the 100 free in 45.19.

There were two other boys’ double winner on the day. One was Calvary Chapel senior and Texas commit Andrew Koustik, who won both the 200 IM (1:50.58) and 100 breast (55.16). While he’s been faster in the 200 IM, that swim in the 100 breaststroke was a new lifetime best for him by over half-a-second. Texas’ breaststroke group was thin this past season, in spite of the NCAA team title, and Koustik’s contibued improvement in the 100 breast is a welcome sign, though the 200 fly (1:43.6) and middle-distance freestyles (4:22.6 in the 500) are his best events at present.

The other double winner was Santa Margarita senior A.J. Rossman, who won the 50 free in 21.14 and the 100 back in 49.97. Rossman is committed to play water polo at Stanford next season.