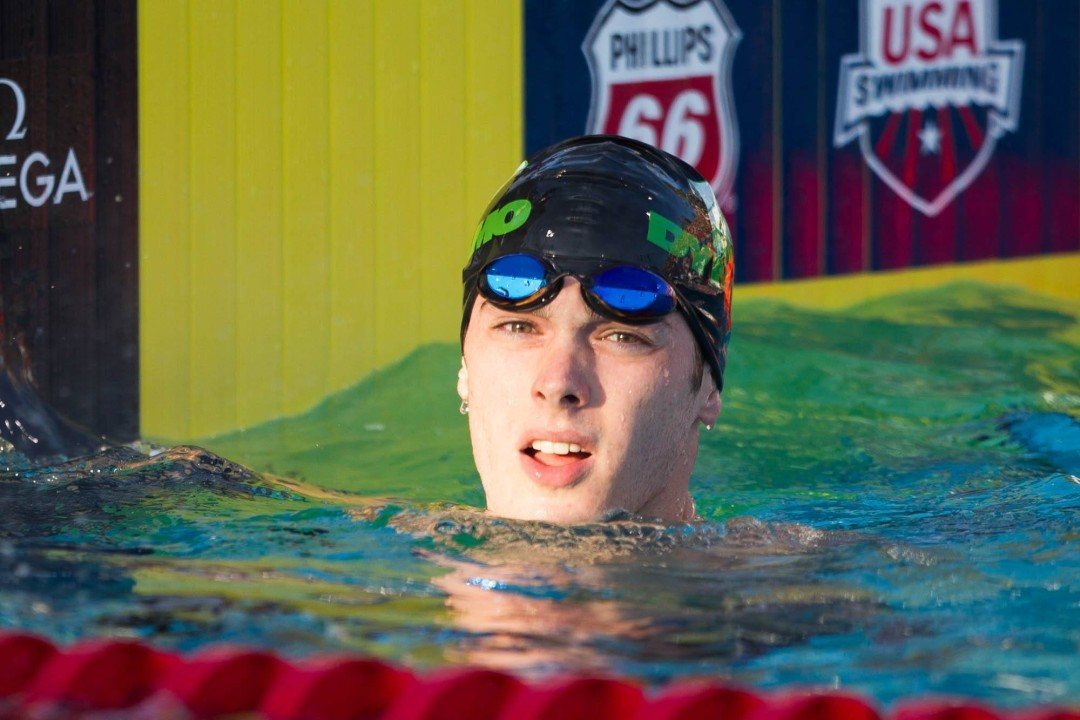 Georgia freshman Gunnar Bentz is zoning in on the 400 IM race, forgoing his 3rd seed in the men's 200 freestyle. Archive photo via Tim Binning/TheSwimPictures.com

Last night’s SEC Championships Finals session saw thrilling action from start to finish, highlighted by title wins across four different schools – Florida, Georgia, Alabama, and LSU (diving).  Today’s prelims are jam-packed with what are sure to be tight races, as the high-profile swimmers are narrowing down their original full schedules to focus on their prime events.

Men’s 400 IM – The top seven seeds remain in tact, with the highest scratch coming from Florida senior Eduardo Solaeche-Gomez (8th seed, 3:46.90).  This moves his teammate, Florida senior Matt Elliott up a spot for this morning’s race.  Although Kevin Litherland (3:50.55) has scratched this event, there are two other Litherlands set to battle head-to-head, as Mick Litherland and Jay Litherland are positioned in the third heat in lanes 3 and 4, respectively.

Women’s 400 IM – Texas A&M freshman Bethany Galat was seeded 7th with her time of 4:09.58, but is absent from today’s prelims sheets.  This moves Florida’s Jessica Thielman into the final heat in a lane right next to top seeded Sarah Henry (Texas A&M), giving Thielman a very fast rabbit to chase in prelims.  Other scratches include LSU’s Kara Kopcso, who is most likely focusing instead on her 100 fly event this morning, and Kentucky’s Danielle Galyer, who was the 13th seed.

Men’s 100 Fly – Last night’s 200 IM title winner, Tynan Stewart, is absent from the morning heat sheets, forgoing his 9th seed in the 100 fly.  This moves last night’s firestarter Kristian Gkolomeev, the 50y free winner from Alabama, into heat 5, lane 3 this morning. Caeleb Dressel has held his entry in this event, meaning that he’ll drop the 200 free as his third individual event.

Women’s 100 Fly – The field remains in tact, save for Georgia’s Kimberlee John-Williams, whose time of 54.31 had her seeded 23rd.

Men’s 200 Free – Georgia freshman Gunnar Bentz is zoning in on his 400 IM race today, relinquishing his 3rd seed in the 200 free.  Dan Wallace is following suit, scratching the 200 free, where the Florida senior was ranked 7th with his time of 1:35.27.  Texas A&M senior Luke Shaw turns his attention to the 100 fly event today, decided to scratch his 9th seed here.  Joe Patching, the sophomore at Auburn who earned third place last night in the 200 IM, is also missing from the 200 free morning heat sheets, but is still scheduled to swim the 100 and 200 backstroke events later in the meet.

Women’s 200 Free – 5th seed Madeline Locus (Georgia) looks to be focusing on her 100 fly event, as she is a scratch for the 200 free.  The same holds true for the 12th and 13th seeds, Texas A&M’s Sammie Bosma and Florida’s Natalie Hinds, as they are also absent from the 200 free, but look ready-to-go for the women’s 100 fly today.