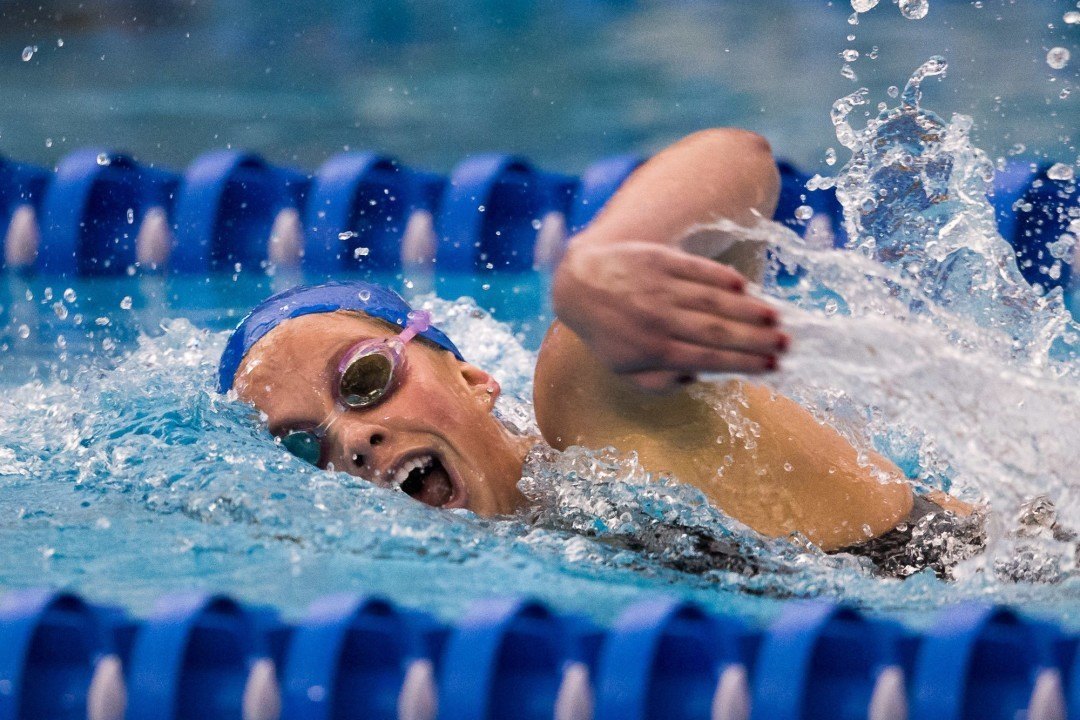 Full Meet Results Available Here. The defending Colorado girls’ 5A High School State Champions from Fossil Ridge got off to a...

The defending Colorado girls’ 5A High School State Champions from Fossil Ridge got off to a fast start early in Saturday’s big-school championship meet, but a major early DQ reshaped the meet and allowed the Fairview girls to take their 2nd-ever State Championship and first since 2004.

After that uplifting victory early, though, Fossil Ridge found disaster two races later. Junior Bailey Kovac, who was a huge favorite coming into the meet after last year’s third-place finish, was disqualified on her back-to-breast turn despite touching first by more than two seconds. That left Arapahoe High School’s Delaney Smith in 1st place with a 2:05.19.

Kovac would remain steadfast and tough and come back later in the meet to swim 1:03.67 in the 100 breaststroke. That made for her 3rd-straight title in that event and left her perfect at this meet in her high school career to date.

The deficit of that disqualification was too much on a mathematical level to overcome, however. It cost Fossil Ridge 20 points on the victory, and while Fossil Ridge still had 3 finishers in the top 9 of that event, Fairview had 4 in the top 11. Fairview also had no scoring divers, whereas Regis Jesuit’s Mckensi Austin (539.90) and Fairview’s Julia Benz (467.80) went 1-2 on the 1-meter.

Those big points for Fairview followed a 200 free that saw junior Brittney Beetcher, the top qualifier after prelims, win in 1:51.07. In all, Fairview outscored Fossil Ridge 34-0 and Regis Jesuit 34-23 in the 200 free to grab the lead: a lead they wouldn’t relinquish for the rest of the meet.

Beetcher was Fairview’s only event winner on the day: she pulled off a dominant distant double by winning the 500 free in 4:56.57. Beetcher was a bit slower in both of those races than she was in runner-up finishes last year, but the graduation of former Arapaho star Ella Moynihan left Beetcher clear regardless.

The future remains bright for Fossil Ridge with a breakout meet by freshman Coleen Gillilan. She became the day’s only individual champion from the high school class of 2019 (freshmen) when she won big in the 100 fly in 53.60. That time, just a few tenths from the state record, beat out Amy Lenderink (55.35) and two other seniors who finished 2-3-4 in the race.

Kochevar herself had quite a day for the 5th-place team from Rock Canyon High. On top of her win in the 50, she won the 100 back in 55.00 for the third time in her illustrious career. This was the first of those three opportunities where she’s added a second gold medal to her haul.

“It was bittersweet, because I’m sad that it’s ending,” Kochevar said to CHSAANOW of her last high school meet. “It was exciting though. I’ve never gotten two wins.”

The other individual event win to Heritage High School sophomore Kylie Andrews, who won the 100 free in 50.91. Lindsay Painton from Regis Jesuit placed 2nd in 51.38.