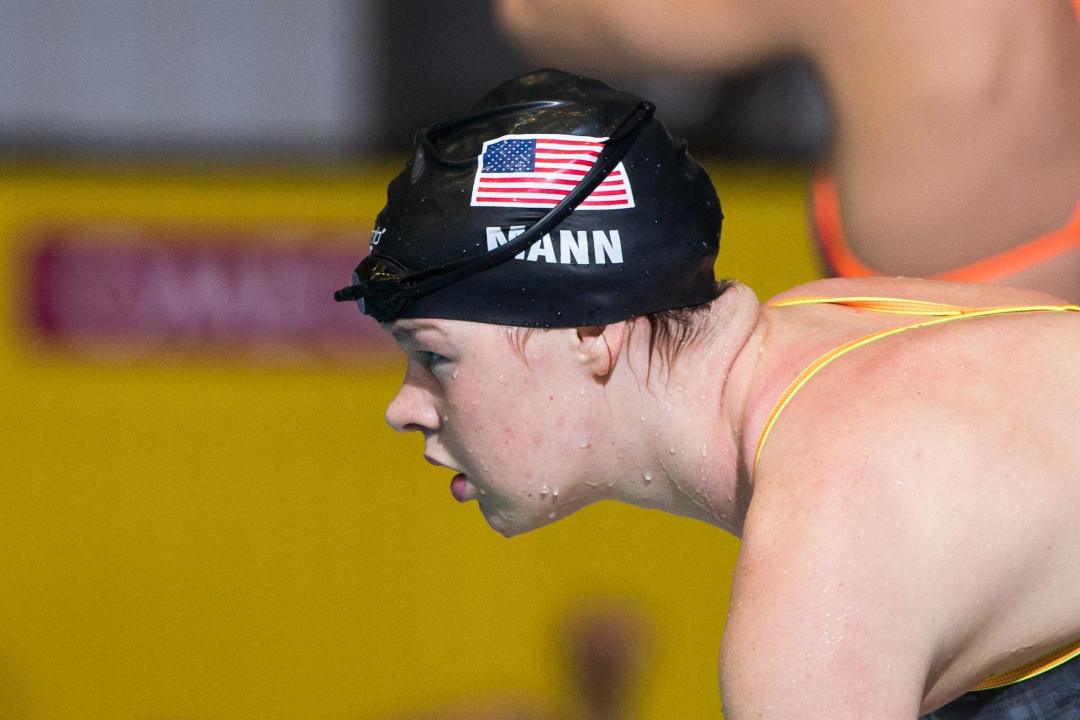 Becca Mann is a United State National Champion in swimming, and now a published author. Archive photo via Tim Binning/TheSwimPictures.com

Yes, that Becca Mann, “I love doubles” Becca Mann, is a published author, and not a non-fiction research author that most of us swim folks seem to be wired for; rather she’s a fantasy-fiction novelist.

The stolen Dragon of Quanx is available through Barnes & Noble and Amazon, as well as an instant download E-Book (in PDF) and through the Apple iTunes store. Click here for direct links to purchase.

A brief synopsis of the book, available for purchase through Outskirts Press:

In a land of tribes where people are defined by the color of their eyes, disaster is ready to strike. With peace barely hanging by a thread, the King of Vitchreonyo makes a risky decision. What he doesn’t know is that his plan may not end how he thinks…. Then Kale, a fisherman’s daughter, is trapped in a tunnel where she makes a shocking discovery. And that discovery may very well lead to the destruction of her entire world. Kale takes up a challenge of following a path forbidden to her in a race to save Quanx from a tribe of conniving dragons. With the help of three uncooperative companions, Kale must steal a dragon egg or die trying. The Stolen Dragon of Quanx is the first novel in The Eyes Trilogy, a compelling new series that will pull you into a fascinating world…and leave you breathlessly waiting for the sequel!

Mann first arrived on the national scene while training with the Clearwater Aquatic Team in Florida by making three finals at the 2012 U.S. Olympic Trials when she was just 14 years old. Now, she’s moved north to train with the famed North Baltimore Aquatic Club, where she’s nary missed a beat.

Now she’s building up to hopes of an Olympic berth to Rio in 2016, which she’ll have a chance to do both in open water and in the pool.

Speaking of in the pool, Mann will be back in action in a few weeks at the 2014 Minneapolis Grand Prix. Until then, here’s an excerpt from her first book.

Love following Becca’s swimming accomplishments, she is an amazing athlete with an incredible drive! This inspiring young lady knows no boundaries… her book excerpt has sucked me in. I can’t wait to read more!! Good Luck

Congratulations on a wonderful accomplishment to this multi-talented young woman! Here’s to many best sellers’ lists in the future!!!