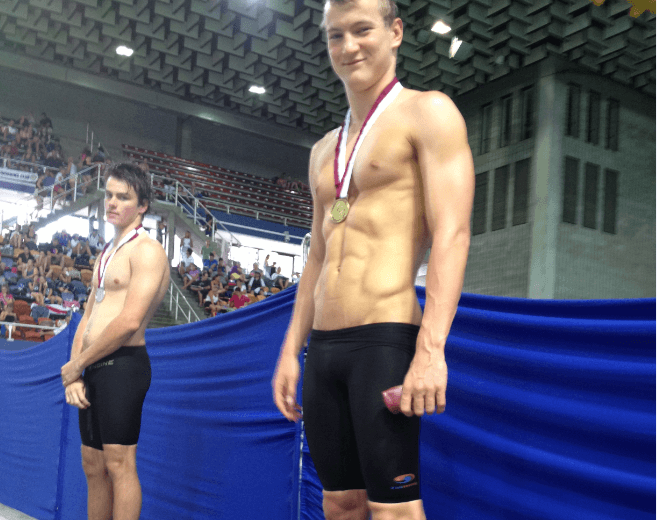 Cam Jones, a Junior World Champion in the 50 fly, has verbally committed to Auburn. photo via Mrs. Jones

Are the Auburn men once again an NCAA Championship contender this year? If NCAA titles are built upon sprinters, they certainly have to be in the conversation, especially with their latest addition.

Australian Cam Jones, who will sign his letter next week, has verbally committed to join the Auburn Tigers in the spring of 2014, meaning that before year’s end, the Tigers will have picked up another sure-fire NCAA finalist. This marks the second-straight year where Auburn has brought in a butterflier at the semester; last year it was Brazilian Arthur Mendes, and this year it’s the 17-year old Jones. Jones may be an even better addition though.

“I believe this is the best choice for me as the guys at Auburn have very similar mindsets to my own, and I feel that when you form a really strong group all striving together towards a common goal then that’s when something special and exciting can happen.” Jones said. “I’m very eager to be a part of that.”

He’s the 2013 Junior World Champion in the 50 fly, where he was a 23.96 this summer. For those American fans who might be a tad unfamiliar with what long course 50 times look like, consider that in that race he beat Dylan Carter, who’s joining USC in the spring, Justin Lynch, and Matthew Josa, all of whom were the best junior butterfliers in the United States last year.

In the very least, this should give Auburn another option for their medley relay, where they’ll now have right around a 20.0 on the fly leg and an 18.5 on the free leg; and their 200 free relay; and an apt replacement for the graduated Kyle Owens, who is the only loss from the NCAA-title winning 200 free relay last season.

Jones’ plan is to make the spring NCAA Championships his focus meet for the season, despite Commonwealth Games and Pan Pac Championships qualifying in the (American) spring as well.

If a foreign country’s federation helps to pay for one of their athletes to train in the US and attend a college, does that money need to be reported back to the NCAA in any fashion? Also…. does this money count against the 9.9 scholarships eligible for men?

John Smith – that’s a good question. I kind of know the answer, but wouldn’t want to mislead if I don’t have it exactly right. Will confirm what I know and let you and everyone know.

That has been a very old question. It as always said that while here they aren’t suppossed to be recieving anything. It is against the NCAA rules . Now the question how does the NCAA check this out as they have no authority in other countries because they. Don’t even know what an NCAA is and what authority do there “investigators” have. No one knows what is set aside for them. It is a poorly covered part of the system and money flows more in foriegn countries than years past and how much have the older ones coming here been taken care of and what are other countries definition of amatuer and Proffessional. It is a poorly documented system that… Read more »