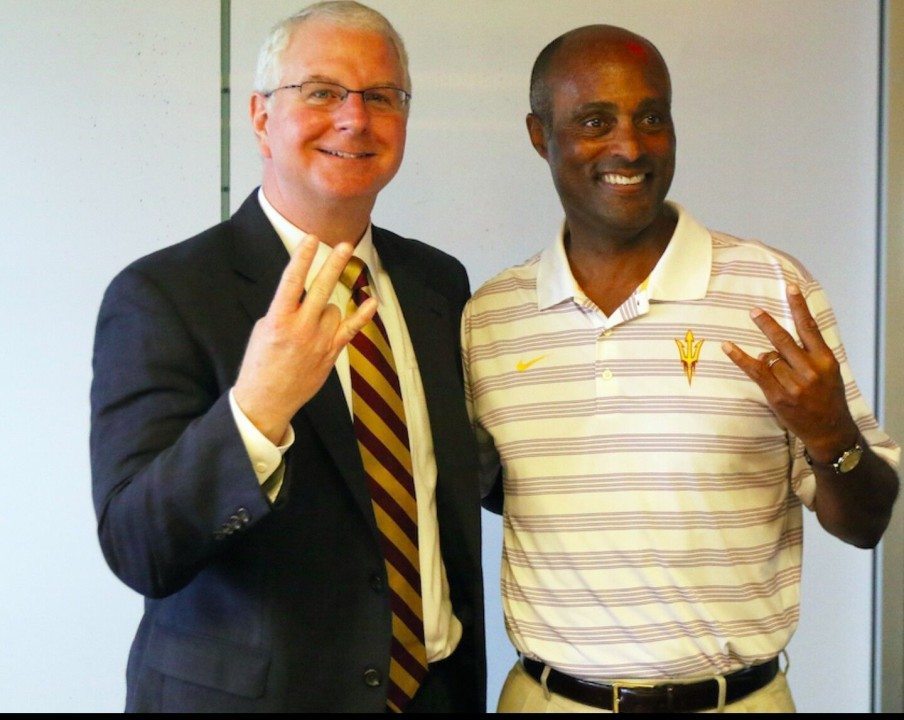 As reported just hours ago, Bob Bowman, the coach of the greatest Olympian of all time, Michael Phelps, has been announced as the new head of swimming at Arizona State University (ASU).

A press conference then ensued, where Vice President for University Athletics, Ray Anderson, officially introduced Bob Bowman and described the impact he hopes Bowman will carry out at the helm of the Sun Devil program. “Today marks a seminal moment in the Sun Devil swimming program,” Anderson said. “Bob is an icon in this sport and one of the most respected coaches in the industry. Under Bob’s guidance we will compete for individual, conference and national titles, produce All-Americans and Olympians, and create the most expansive developmental swim program in all of collegiate sports. His experience at every level of competition will allow him to grow our swimming program into an elite team and an invaluable community asset.” (thesundevils.com)

With Bowman having been named USA Swimming Coach of the Year on six occasions, as well as fulfilling the role of U.S. head coach at the 2007, 2009 and 2013 World Championships, the man is no stranger to carrying out grand visions.  “I am very honored and excited to lead the Sun Devil Swimming program,” said Bowman. “The leadership and vision of excellence established under Ray Anderson is impressive, and is matched by the enthusiasm and support of the entire Athletic Department. I look forward to returning to coach at the collegiate level and be part of the great community that Arizona State University has to offer. I am motivated by the opportunity to help develop student-athletes as individuals and I am confident that we can build a swimming program that will be a source of pride for all ASU students, faculty and alumni.” (thesundevils.com)

In terms of collegiate experience, Bowman served as the University of Michigan Head Coach from 2006-2008, where he led the Wolverines to a top-eight finish at the NCAA Championships each year.  For his efforts, Bowman was named Big Ten Coach of the Year in 2007 and 2008.  Related to Anderson’s job scope of Bowman being an asset to the community, Bowman also has experience in that realm.  The overall learn-to-swim initiative is a cause in which Bowman has made his mark, helping implement the Michael Phelps Foundation and its “im” program, which strives to educate and arm underprivileged children with life-saving swimming skills.

Leaving his current role as CEO and Head Coach of North Baltimore Aquatics Club (NBAC) led to questions concerning his existing swimming contingency, including Michael Phelps, Allison Schmitt, Lotte Friis and others, of which Bowman confirmed Phelps would be joining him in Tempe.  “If we’re going to recruit the top athletes, every one of those want to swim in the Olympics,” Bowman said. “They need to know they have a vehicle for doing that and this is a perfect opportunity to demonstrate that.”

Bowman will begin working at the school full-time in August, but will be working throughout the summer to assemble his full-time staff.

Tanning can cause skin cancer which is the leading cause of death is blerbyblerbiville and the major financial houses in Switzerland have been planning this move for months. Moon landings, deep sea creatures, stock market in Brazil, pollution in Denmark and animal extinctions in asia. It’s all connected, can’t you see?

All that & he must learn Spanish . It is a lot for the man to think about when Swswammers just want him to swim. , swim , swim ,settle down & swim some more .

I kid you not . Once I was in the Rutland Public Library & someone mistaking my accent asked me how Queen Elizabeth’s health was . A bit surprised I answered ‘Good “. He then proceeded to tell me that he was related to her way back & is thus in line to be an Illuminati -when she dies . Apparently there are only so many & she is taking his spot .

Well it was Vermont.

Kudos to Arizona State for going after the best available coach for their swim program – and getting a swimming legend as part of the deal to bring “star power” to the university pool. But a humorous picture of Bowman – wearing a USC colored tie (also the colors of ASU) and doing a hand sign combination of the USC “V Fight On!” and the Texas Longhorn “Hook ‘Em Horns”.

Wonder what his salary is? Should be public info. Not that he needs a big contract, just wondering what ASU decided to pay considering the near collapse of the men’s program recently.

I think they have to post his salary since it is a public university. It wouldn’t include camps or such though.

Rock er with the shocker!

Bowman needs to work on separating the index and middle finger a little more in his pitchfork. Just sayin’.

In leaving NBAC, does Bowman still OWN the team???

I watched the press conference, and from what I understood, he and Phelps own the facility and lease it to NBAC. He is/was on the board of NBAC, which is a non-profit organization, and will be stepping down from his position on that board. I guess that means he worked for NBAC but didn’t own NBAC. If anybody knows more about this than me, please feel free to correct me.

He and Michael don’t own either, they leased with an option to by the facility from Murray Stephens. He was CEO of nbac not the owner.