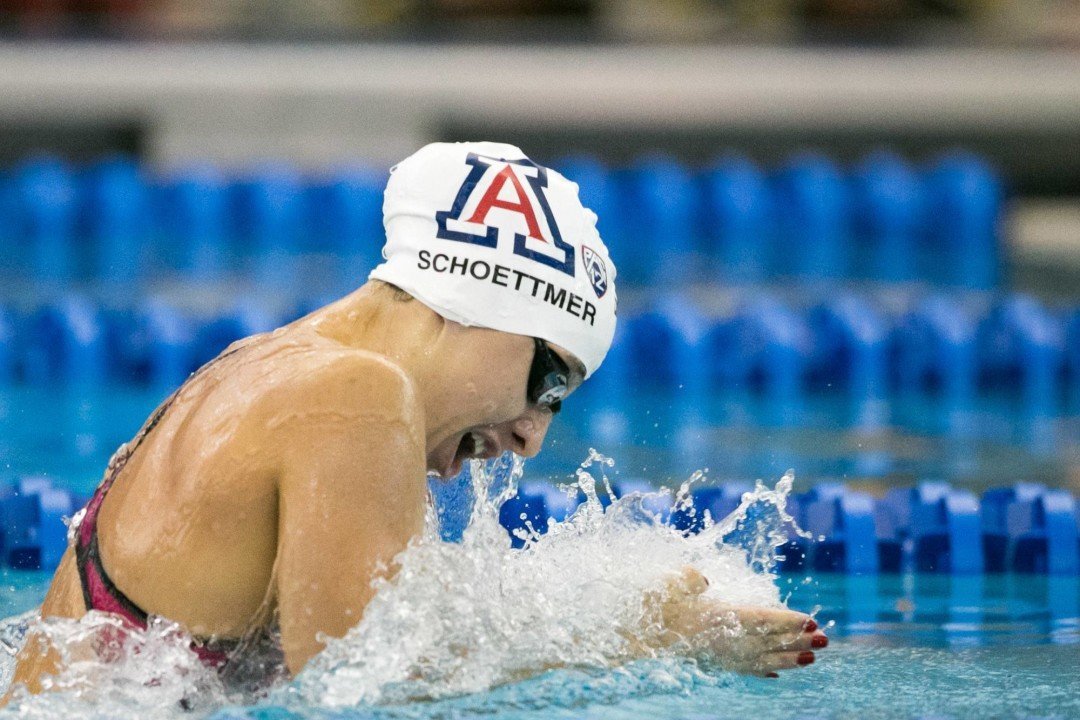 Arizona senior Emma Schoettmer and Arizona State sophomore Patrick Park have been named the Pac-12 Swimmers of the Month for November. They... Archive photo via Tim Binning/TheSwimPictures.com

Arizona senior Emma Schoettmer and Arizona State sophomore Patrick Park have been named the Pac-12 Swimmers of the Month for November. They were joined in the honor by USC divers Maria Polyakova and Collin Pollard in earning the awards.

Schoettmer, an All-American breaststroker, won 3 of 4 individual events against UCLA and USCas part of a 1-1 team record for the Wildcats on the month. That includes a sweep of the 100 breaststroke in 1:01.73 and 1:01.30 in those meets, respectively; and also won the 200 breaststroke against UCLA in 2:13.48.

While she wasn’t able to beat USC freshman Riley Scott in the 200 breaststroke on her second attempt, Schoettmer dropped more than a second to go 2:12.75 and come up just a tenth short.

This is Schoettmer’s first career Swimmer of the Month award, and the 6th for the Arizona program.

Polyakova, a native of Penza, Russia, has won seven of her eight competitions since October and has placed first in every 3-meter springboard final so far this season. Polyakova swept the diving events against Arizona in Tucson, scoring marks of 296.03 on the 1-meter and 303.45 on the 3-meter. At the Trojan Diving Invitational, the sophomore swept the springboard events again, totaling a 591.35 on the 1-meter and posting a 3-meter score of 580.10. In the dual meet against ASU, Polyakova placed second in the 1-meter (283.5), only 1.05 points behind the first-place winner. She then recorded her highest score this season in the 3-meter in dual competition, scoring 304.70 to take first place.

This is the second-career Diver of the Month honor for Polyakova and 11th overall for UCLA. She previously earned the award for the month of December 2014.

On the men’s side, Park had a dominant month that included 5 individual event victories and 5 relay victories as part of a busy month that saw Arizona State drop duals to USC and Air Force, and place 5th out of 8 teams at the Art Adamson Invitational hosted by Texas A&M.

Among Park’s victories was a win in the 200 fly at Art Adamson in 1:44.72: a time that jumped him to 3rd on Arizona State’s all-time rankings and just a second away from the school record.