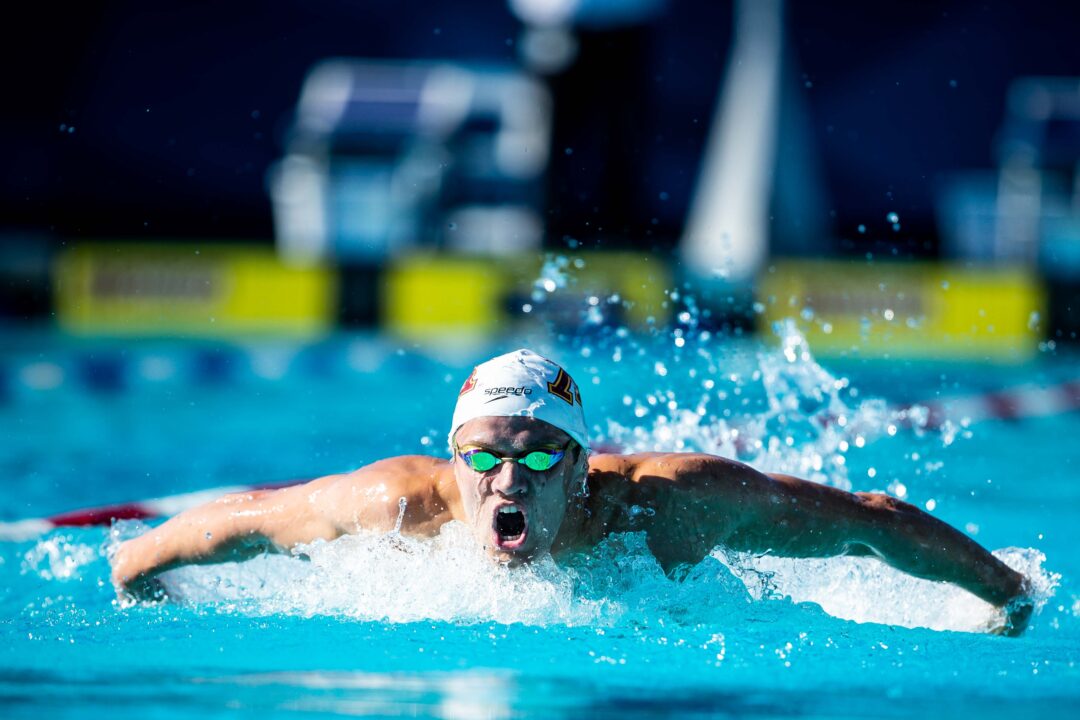 Coming into the day with a PB of 1:46.13, Neverman swam a time of 1:43.91 in the 200 IM final at the Minnesota Invite to break the Gophers' school record. Archive photo via Jack Spitser/Spitser Photography

Minnesota junior Kaiser Neverman has been on fire through the first two days of the Minnesota Invitational.

After contributing a 1:33.64 split on the Golden Gopher’s record-breaking 800 free relay Wednesday night, Neverman swam back-to-back personal best times in the men’s 200 IM, culminating with a new school record and a third-place finish against a competitive field.

Coming into the meet, Neverman held a best time of 1:46.13 in the 200 IM, set at the 2021 Big Ten Championships during his freshman year where he finished in 18th place.

During Thursday’s prelims in Minneapolis, the 20-year-old brought his personal best down to 1:45.33, qualifying second into the final behind Texas senior Braden Vines (1:43.70), putting him within eight-tenths of the Minnesota school record of 1:44.53 set by Jakub Maly in 2016.

In the final, Neverman took care of business, getting down to 1:43.91 to place third, reset the program record and bring his PB down by more than two seconds over the course of eight hours or so.

The only swimmers finishing ahead of him were 2022 NCAA runner-up Destin Lasco and fellow 2022 ‘A’ finalist Jake Foster, while Neverman managed to out-touch Vines, a consolation finalist at last season’s NCAAs, by one one-hundredth.

“That was a little bit more of a surprise,” Neverman told SwimSwam’s Ben Dornan of the 200 IM, comparing it to the 800 free relay the previous night. “Obviously, the fly events are more on my sights, and the long course 200 fly was the one I got this summer, so I was looking for those.

“But I still train IM and am still involved in that event so when I went my best time in the morning, I knew that I was pretty set up to do something so I just did the best I could, and it was really fun.

Compared to his best time coming in and his prelim showing, Neverman was faster across all four strokes in the final, particularly over the back half. His second 100 in the final (54.84) was over a second faster than the morning (55.86).

Compared to the previous Minnesota record, set by Maly at the 2016 NCAA Championships, Neverman made the difference with his sub-25 freestyle leg.

“That one was in (our) sights and that was part of the decision-making in not doing to 200 medley (relay),” Neverman said.

On Friday, Neverman was five one-hundredths shy of his best time in the 100 fly, registering a time of 46.82 to qualify into the final tied for fourth.