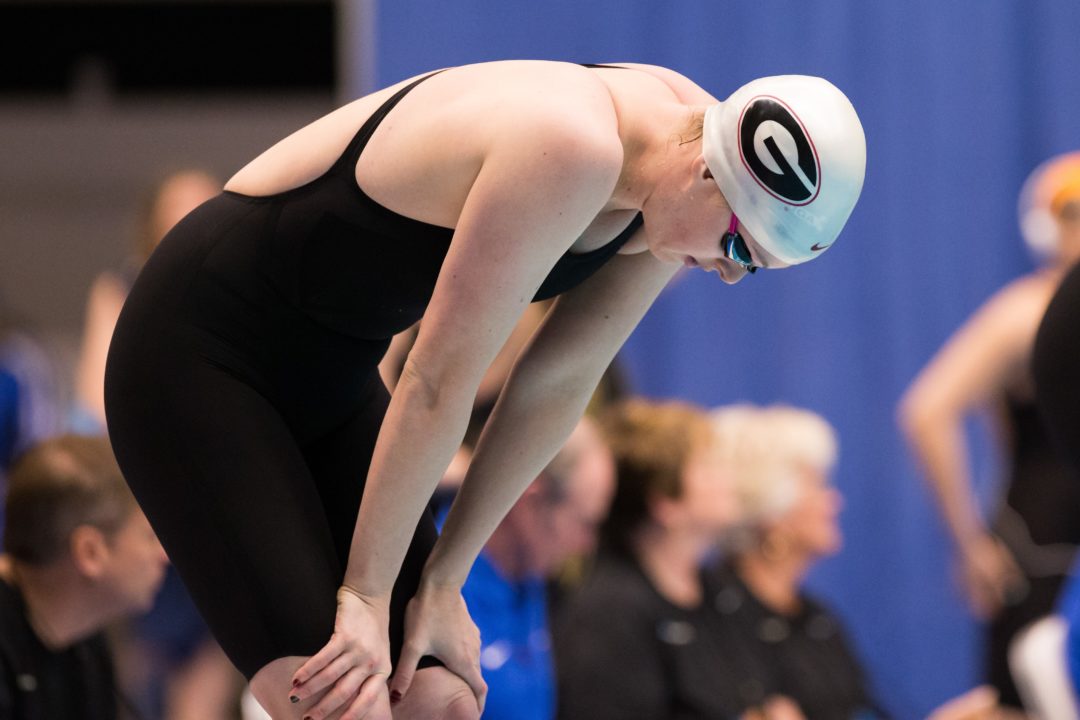 Allison Schmitt has been named the SEC's female athlete of the year. (Photo: Tim Binning/TheSwimPictures.com)

Georgia’s Allison Schmitt has been named as the 2012-2013 Roy F. Kramer SEC Female Athlete of the Year the conference announced Tuesday. She was joined in that honor by Texas A&M quarterback Johnny Manziel, the men’s winner; Manziel became the first freshman to ever win the Heisman Trophy as the nation’s best football player this year.

Schmitt earned the equivalent award for women’s swimming as the recipient of the 2013 Honda Sports Award for swimming as she led the Georgia Bulldogs to the NCAA Division I National Championship.

She was a member of the 400, and 800 free relays that both won National Championships as well as the individual title in the 200 free.

The conference also recognized Schmitt’s successes in the Olympic pool, where she won gold medals in the individual 200 freestyle and as part of the American women’s 800 free relay, as well as a third gold in the 400 medley relay, a silver medal in the 400 free, and a bronze in the 400 free relay. She was the first Georgia swimmer to ever win individual gold.

Ah… Nicole Haislett..reminds me of my first time watching the Olympics. Whoever advised Van Almsick before that race was not the most genius person on earth. For some inexplicable reason, right from the start, Van Almsick who was in lane 4) moved away from lane 3, and kept hugging on the lane line next to 5 (Haislett). And Haislett drafted Van Almsick all the way. Van Almsick kept looking at lane 3 (can’t remember who it was, Dobrescu?), she most likely did not think that Haislett would pose any threat to her and kept hugging the lane with Haislett. And only in the last 50 did she look at lane 5, and only moved away from the lane, laughably, in… Read more »

And the strange thing is that even without that gold medal from 1992, she became a national sensation in Germany. Receiving more attention after Barcelona than the GOLD medal winners. I remember reading an article waaaaay back when that the gold medalists were quite put off that the silver medalist would receive so much more than the gold medalists in the way of celebrity, money, etc.

Here is the video of that race:

By the way, just look at what a beautiful outdoor stadium packed with spectators. Just how it should be but again we’re heading into an indoor arena with probably a new record of additional artificial lightning installed while there would have been plenty of it available under the sun.