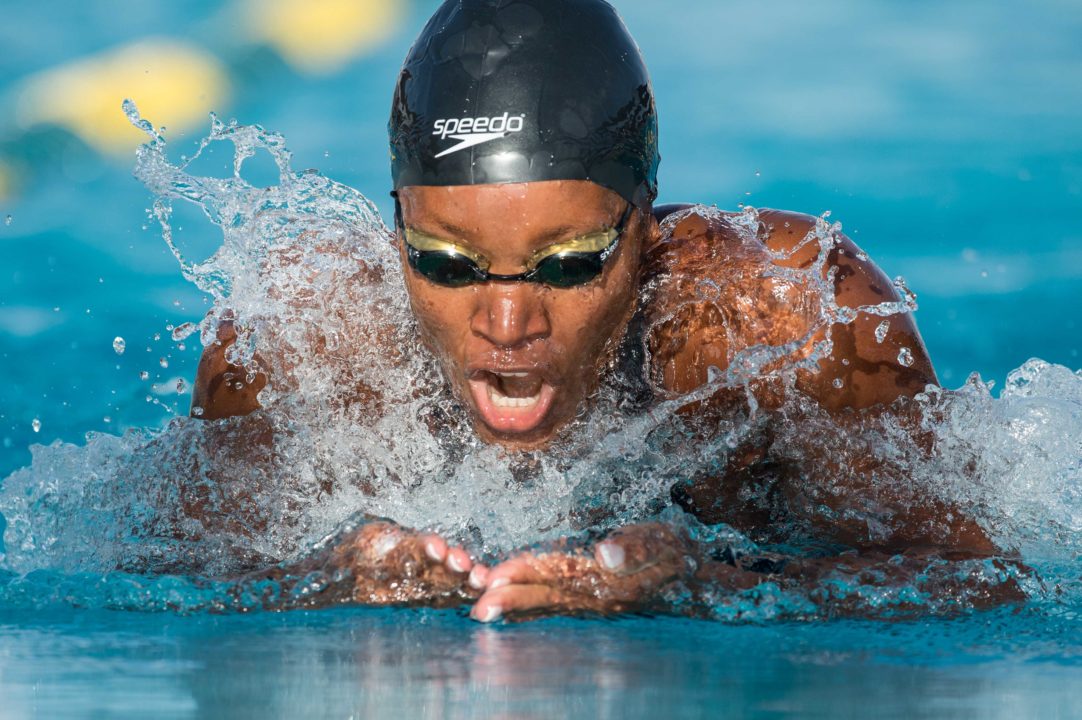 Alia Atkinson emerged at the 2014 Mesa Grand Prix with a Speedo logo on her forehead and a pair of event victories. Current photo via Mike Lewis/Ola Vista Photography

For the second year in a row, Trinidad and Tobago’s Dylan Carter wins the Swammy Award for Central American & Caribbean Male Swimmer of the Year.

Jamaican breaststroker Alia Atkinson continues her run of success today as Speedo’s International wing announced the signing of the Olympic finalist to a new three-year sponsorship. This is her first major suit sponsorship.

Atkinson has quietly built herself an impressive resume over the last half-decade. The 25-year old breaststroker was the 2010 NCAA Champion in the 200-yard distance. About 18 months into her graduation, she took 4th at the 2012 Olympics in London in the 100-meter breaststroke, missing becoming Jamaica’s first swimming Olympic medalist (and just their second in any sport outside of athletics) ever.

She would go on to win double silver in the 50 and 100 breaststrokes at the 2012 World Short Course Championships in Istanbul, which was Jamaica’s first ever swimming medals at a ‘global championship.’

She wound up taking 2nd place at the 2013 FINA World Cup Series (behind Katinka Hosszu), with 11 total event victories across the 8-meet series.

Her successful run continued last weekend at the Mesa Grand Prix, which included a lifetime best in the 200 meter breaststroke. She won both the 100 and 200, easily topping a field that included America’s best breaststrokers: Micah Lawrence, Breeja Larson, Laura Sogar, and Jessica Hardy.

Congratulations to Alia! She has been living and swimming in the U.S. since she was a 10&U. You would be hard pressed to find a nicer person. So happy for her!

Congratulations Alia! Your “Bahamian Family” are really proud of your achievements! Continue to excel – we are watching!