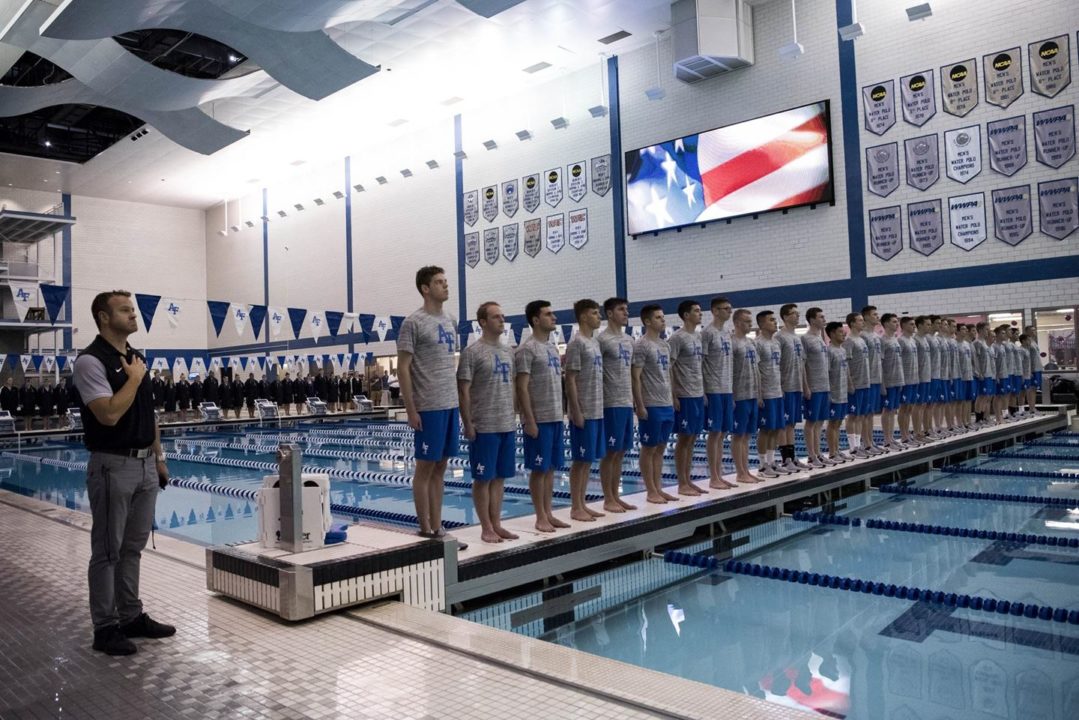 “We’re excited to get this season started,” Clayton exclaimed. “The guys are always thrilled to jump in the lake and swim the Horsetooth Open to start the season. From there, we compete against some of the top WAC schools in Grand Canyon, Cal Baptist, Seattle, and Wyoming, as well as some top regional schools in BYU and Denver.”

“Our fall schedule will culminate at College Station right before Thanksgiving,” Clayton continued. “This will allow the athletes the opportunity to qualify for 2020 Olympic Trials. After Christmas, we’ll swim a few meets here at the Academy as we peak for the WAC Championships in Houston. Our schedule will be challenging as we face top teams week in and week out. We’re excited and ready for the challenge!”

The Falcons open the year with at the Horsetooth Open Water Swim, Sept. 8, up in Fort Collins. They then host the annual Blue/Silver Intersquad meet, alongside the women, Sept. 28 at the Cadet Natatorium. The first regular season event is the Intermountain Shootout, hosted by Colorado Mesa in Grand Junction, Colo., Oct. 4-5.

Duals begin later that month, as AF begins Western Athletic Conference action, Oct. 18, when it heads up to Wyoming. The next day, Oct. 19, Air Force goes down to Denver to face the Pioneers of the University of Denver.

Then November begins with a tri-meet at home against Colorado Mesa and the Colorado School of Mines, Nov. 1. This is followed by a two-day road dual against WAC foe Grand Canyon, Nov. 8-9. Air Force then swims in the midseason Art Adamson Invitational, hosted by Texas A&M. The three-day event runs Nov. 21-23. 2019 wraps up with the divers, who will participate in the Utah Diving Invitational, Dec. 6-7.

2020 opens up with back-to-back home duals, as the Falcons will host Incarnate Word for a pair of meets, Jan. 10-11, followed by a two-day tri-meet with WAC teams Cal Baptist and Seattle, Jan. 17-18. AF then remains at home as they will host the annual Colorado Sprint Championships, Feb. 1. The final regular season event will be the AF Diving Invitational, which will occur Feb. 6-8.

Then it is into Championship season, starting with the WAC Championships held in Houston, Texas, Feb. 26-29. The NCAA Diving Zone E competition will take place in Flagstaff, Ariz. March 9-11. Meanwhile, the College Swimming and Diving Coaches Association of America (CSCAA) will have its now annual National Invitational Championships, held in Cleveland, Ohio, March 12-14. This year’s NCAA Championships will take place in Indianapolis, Ind., March 25-28.