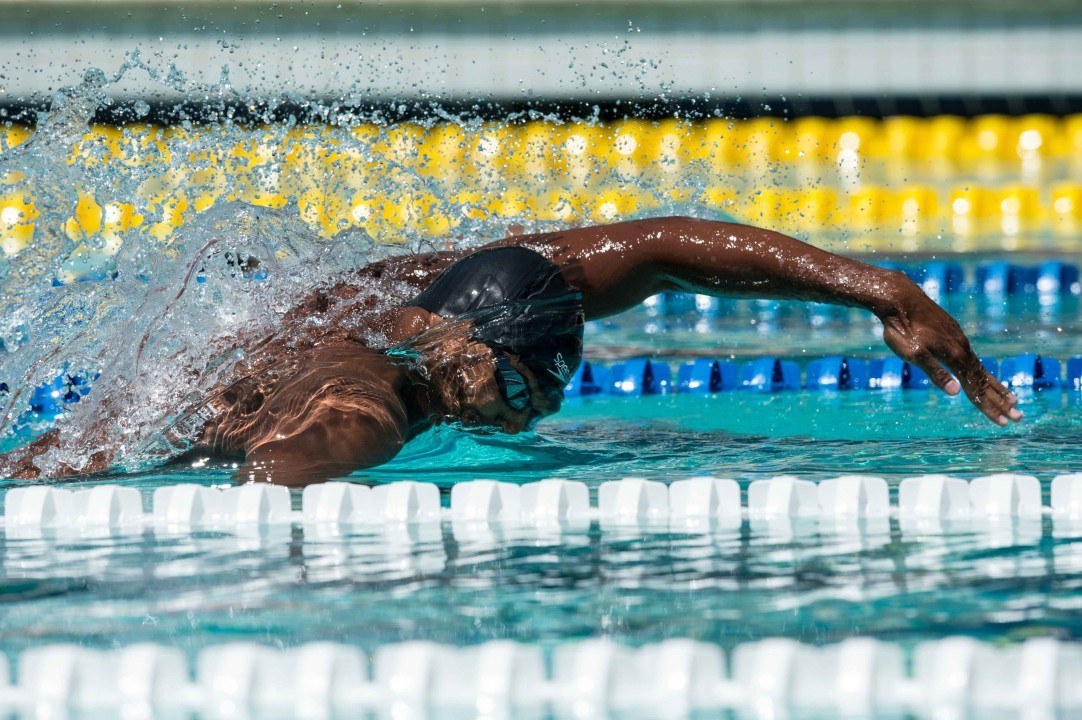 #1 - Cullen Jones! This two-time Olympic gold and silver medalist understands the need for speed and power. Learn how to develop both and the importance of proper and recovery to achieve your maximum strength in swimming. Current photo via Mike Lewis/Ola Vista Photography

Courtesy of the USA Swimming Foundation

USA Swimming Foundation’s 2015 Adult Performance Camp, scheduled for October 16-18, brings swimmers age 19+ from all over the country to the Olympic Training Center in Colorado Springs to live, eat, and train like a national team athlete. Attendees this year will swim with, and learn from, some of swimming’s greatest athletes and coaches.

Cullen Jones is a two-time Olympic gold and silver medalist. Jones has been a member of the USA National team since 2006. Since then, Jones has set two American records: once in 2008 in the 50 yard freestyle and again in 2009 in the 100 yard freestyle, which still stands as the fastest time in U.S. history. At the 2008 Beijing Olympics, he swam the third leg of the spectacular 4X100 free relay against France. This race secured his spot in Olympic history not only by swimming in that legendary race, but also becoming the second African American to win gold at an Olympic Games. Jones is involved with charitable work, specifically being one of the USA Swimming Foundation’s first major ambassador to the Make a Splash program. Fun Fact: Cullen’s future aspiration is to become a writer for a men’s fashion magazine.

Ambrose “Rowdy” Gaines is a former American swimmer, U.S. Olympic Hall of Fame member, three-time Olympic gold medalist, and member of the International Swimming Hall of Fame. He is currently an ambassador for the USA Swimming Foundation, as well as a swimming analyst for NBC. At Auburn University, Gaines was a five-time NCAA champion, and during one four-year period set eleven World Records. Gaines was a favorite for the 1980 Olympics in Moscow, which were subsequently boycotted by the United States. In 1984, Gaines qualified for the 1984 Summer Olympics, where he took gold in the 100m free, 4x100m free relay and 4x100m medley relay. Rowdy now resides in Florida where he recently built the “Rowdy Gaines Olympic Pool” complex to provide recreational opportunities for families and athletes in the community! Fun Fact: Rowdy Gaines didn’t start swimming until he was 17 years old.

Debbie Meyer is a three time Olympic champion. At the age of 16, Meyer won the 200, 400, and 800 freestyle events in the 1968 Olympic Games in Mexico City. She was the first woman to ever win three gold medals in one Olympic Games. Throughout her career she broke 20 world records and 24 American records. In 1967, 1968, and 1969 she was named “World Swimmer of the Year” by Swimming World. Meyer retired in 1972 and was later inducted into the United States Olympic Hall of Fame in 1986. Fun Fact: Although Debbie was one of the first women in 1968 to compete in the women’s 400 and 800 freestyle events, men had been competing in the 1500 meter freestyle since 1896!

Jason Lezak is a four-time Olympic gold medalist. He has competed in the past four Olympic Games: 2000, 2004, 2008, and 2012. Throughout his career, he has won 29 medals in major international competitions: 18 gold, 7 silver, and 4 bronze spanning the Olympic, World and Pan Pacific Championships. Lezak was the former American Record holder in the 100 yard freestyle. He has served as an ambassador for the USA Swimming Foundation and supports several other charitable organizations. Fun Fact: Jason has been the oldest member of the USA Olympic team for the last two Olympics.

Todd Schmitz is the head coach of the Colorado Stars, which is the home training program of swimming phenomenon Missy Franklin, who won five medals at the 2012 Olympic Games in London. Following the 2012 U.S. Olympic Team Trials, Schmitz was named to the 2012 U.S. Olympic Swim Team as an assistant coach. Schmitz is known for his unique youth training approach, which is focused on avoiding burnout and maximizing success for his young athletes. Schmitz is a native of North Dakota and a graduate of Metropolitan State University of Denver. Fun Fact: Todd’s Five Pillars of Coaching are: 1) To be true to yourself; 2) Always learn; 3) Smile every day; 4) have fun; 5) Enjoy the moment, create memories.

Participants at the USA Swimming Foundation’s Adult Performance Camp will spend a weekend on the campus of the iconic U.S. Olympic Training Center, where they’ll have the opportunity to live, eat and train like a National Team Athlete.

While on campus, participants will train in the world-renowned Olympic Training Complex Aquatic Center—a state-of-the-art facility containing a 50m by 25m pool that is equipped with every conceivable training aid. The Aquatic Center is arguably the finest training facility in the world, and has been the training site for nearly every U.S. Olympic swimmer.

The best part of the Performance Camp is making new friends. You eat, train and live together, becoming fast friends. While the coaching and the instruction are invaluable, it’s the good times and friendships that last.

You’re going to be in the pool a lot cranking up your appetite. At the OTC, the training table (aka the OTC cafeteria) is a hop, skip and a jump from the Olympic Training Complex Aquatic Center. You will appreciate and enjoy the food.  For breakfast, enjoy hot, made-to-order omelettes (my favorite). For lunch and dinner the salad bar is always a must. You will have endless, healthy options to refuel your body for your next swim session.

2015 Adult Performance Camp
When: October 16-18, 2015
Where: Olympic Training Center, Colorado Springs
Ages 19+
Cost: $2,500*
*A portion of all registration fees will go to support the USA Swimming Foundation. Does not include travel to/from Colorado Springs.

Please direct Adult Performance Camp inquiries to Nicole Wilson via email, or by phone at 719-866-3583.

“This was one of the most amazing experiences I have ever had in my swimming career. Unless you made the Olympic Team in the past, you are unlikely to experience a training camp like this. I would recommend this to anyone who wants a once in a lifetime experience.”

“A true “Fantasy” experience. Just working on technique with Coach David Marsh for three days, arguably the top coach in the world right now, is priceless. Add to that meeting, casually hanging and swimming with, and learning from five legendary US Olympic champs in the US Olympic Training Center environment was beyond any expectations. I feel re-energized, faster and smarter in the pool already. Can’t wait until my next meet to see the actual results. Would do this again in a heartbeat.”

Swimming News is courtesy of the USA Swimming Foundation.