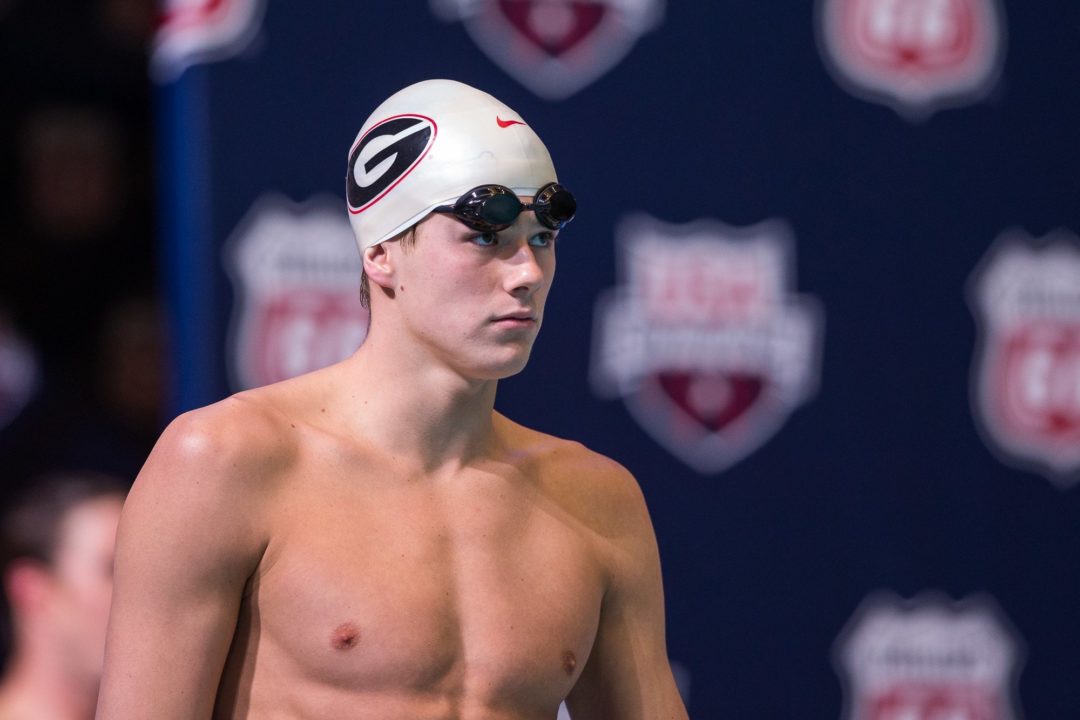 For an athlete to repeat winning an athletic title twice-in-a-row is an enormous feat, let alone the thought of three-peating a major meet victory.  But, what Georgia Bulldog Nic Fink accomplished tonight falls into a category all its own, as he became just the 9th SEC athlete ever to delve into the 4-time winner inner circle.  Fink has now won the 100 breaststroke SEC title now four years in a row – 2012, 2013, 2014, 2015.  Congratulations to Mr. Fink on this absolutely incredible accomplishment.

Kentucky’s Christina Bechtel won the women’s 200 fly race tonight in a time of 1:52.78, giving the Wildcats its first SEC championship title since 2007.  Yes, Lexington has been waiting quite a while for one to be brought home to the Bluegrass state.  Bechtel’s time tonight would have placed 2nd overall at last year’s NCAA championships – could there be a possibility of more than just an SEC title in the works for this Wildcat senior?

Smoke, flames and thermogenic steam was seen rising from the pool in the aftermath of the Alabama men’s 400 medley relay win tonight.  The squad of Connor Oslin, Anton McKee, Brett Walsh and Kristian Gkolomeev threw down the downright dirty time of 3:04.22 to take the SEC title, SEC record and take over as the country’s #1 fastest time.  Gkolomeev particularly laid waste to the field with his searing 41.33 freestyle anchor split.  That split was faster than any other freestyle anchor at last year’s NCAAs – faster than De Lucca, faster than Deborde….Yeah, he was that quick.

Chase Kalisz followed up his stellar 400 IM SEC title with another terrific swim tonight in the 200 fly to give the Georgia Bulldogs two titles from his efforts.  Tonight’s time of 1:41.70 is his fastest of the year and would have claimed 3rd at last year’s NCAA Championships, where Kalisz did not even make the Finals in the event.

Alabama sophomore Connor Oslin now owns the 2nd and 3rd fastest 100 backstroke times in the country, thanks to his incredible prelims and finals swims today.  Oslin clocked a 45.47 this morning to position himself as the top seed going into the finals, and he capitalized on the middle lane placement dropping .02 to win the SEC title for  in 45.45.  Oslin was the only swimmer in tonight’s final who cleared the NCAA automatic qualifying time.  What is especially remarkable about Oslin’s performances comes to light when we look at his times towards the end of the season last year.  He finished in 6th at last year’s SECs in a time of 46.77 and finished 23rd at the NCAA Championships in a time of 46.54.  This sophomore is certainly following the right path and doing the right things to move him leaps and bounds (ok, a good second in the pool) ahead of his former freshman self.

Impressed by Kalisz’ 200 fly performance. 1.41 not fully rested, that’s great for him.
Great job by Fink too who confirms he’s right now among the top 3 American breaststrokers. Like Cordes, he’s a senior so he’ll have a full year of long course training ahead of him to focus on US trials and the olympic games. Both guys will show us next year their full long course potential in my opinion.