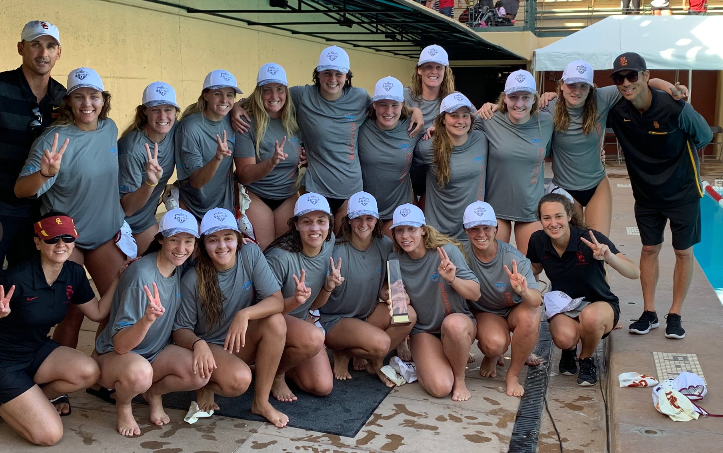 The No. 2 USC women's water polo team shrugged off a two-goal deficit in the fourth period and forced overtime, where the Trojans would eventually net the golden goal on Paige Hauschild's blast from 10 meters out after almost 41 minutes of action to beat Stanford and win the MPSF Tournament championship. Current photo via USC Athletics

PALO ALTO, Calif. — The No. 2 USC women’s water polo team shrugged off a two-goal deficit in the fourth period and forced overtime, where the Trojans would eventually net the golden goal on Paige Hauschild‘s blast from 10 meters out after almost 41 minutes of action to beat Stanford and win the MPSF Tournament championship. It was USC’s second straight conference crown won in OT over Stanford. This time, USC was the No. 2 seed while host Stanford gripped the top seed. But the Trojans were up to the challenge in the Cardinal’s home pool — also the site of the coming NCAA Tournament — and closed out a 9-8 victory to secure an automatic berth into the NCAA tourney. USC improves to 26-1 in winning its sixth MPSF Tournament title.

Hauschild’s heroic game-winner came with 43 seconds left in the third overtime frame — a golden-goal situation after both teams had come up scoreless in the previous two 3-minute overtime frames. The goal was Hauschild’s fourth of the game, pairing well with goalie Amanda Longan‘s incredible 13-save outing to stymie host Stanford in the Cardinal’s home pool.

USC had not led since the first period, when Hauschild ripped in a goal out out of 2-meters. Stanford would move into the lead next, and was up 3-2 after eight minutes of action with Kelsey McIntosh accounting for the second Trojan goal of the game. The Cardinal got up 4-2 early in the second, but USC fired back and leveled it at 4-4 on a rocket from Elise Stein and a dirty cross cage finish from Hauschild. The second of four Stanford 5-meter penalty shots would get past Longan to get the Cardinal a 5-4 advantage, but USC had the last word of th half when Mireia Guiral earned 6-on-5 for the Trojans, then took a feed from Hauschild to equalize things at 5-5 before halftime.

In the third, Stanford moved ahead once again with a 6-on-5 finish, leaving USC to look for another equalizer. Maud Megens served up a pass for Alejandra Aznar, and the freshman buried it to make it 6-6 with 2:20 on the clock. Another Stanford 6-on-5 would see the ball in the back of the net as the Cardinal got a friendly ricochet off a USC blocker to get the hosts ahead 7-6.

In the fourth, Longan opened the frame with authority in snuffing Stanford’s fourth 5-meter penalty look of the game — her second penalty stop in the second half. A minute later, though USC fell behind by two with another power play finish. But the Trojans moved quickly to respond. Freshman Bayley Weber got the takeaway on the defensive end next and hit Hauschild on the break to get one back for the Trojans at 8-7. Stanford was awarded another power play next, but Maud Megens interrupted that series with an incredible one-handed haul-in on the goalline to preserve the one-goal margin. USC would go up next, and Hauschild returned the favor to Weber, who zipped in the equalizer to make it 8-8 with 3:07 left in regulation. Both defenses stood strong through the next stretch, and the 8-8 lockup would stand as the teams transitioned into overtime.

The first two overtime frames saw more intense defense. Longan notched another huge save in the first, but Stanford got a late save of its own to keep it at 8-8. In the next 3-minute OT stretch, Courtney Fahey earned a power play for the Trojans, but the ensuing shot went high. Weber squashed a Stanford 6-on-5 next with a field block, and it was still 8-8 by the next buzzer. That brought the teams into a golden-goal overtime stretch. Weber got USC a 6-on-5 first, but Stanford made another key save. As the final minute of the first golden-goal OT ticket down, USC set things up. Denise Mammolito got the ball to Hauschild, who reared up from about 10 meters out and sent a sniper shot that tucked itself into the back of the net, stopping play with 43 seconds on the clock and propelling the Trojans to a hard-fought and heart-stopping 9-8 victory.

The MPSF Tournament victory registered the Trojans first-ever back-to-back conference crowns and sets up USC well in pursuit of the program’s first-ever back-to-back national championships. Automatically qualified for NCAA action — USC’s 16th consecutive visit — the Trojans await the seeding and bracket announcement for the 2019 NCAA Tournament, which will be announced at 5 p.m. ET tomorrow (April 29) on NCAA.com.

STANFORD, Calif. – USC’s Paige Hauschild scored with 43 seconds remaining in the third overtime period and No. 1 Stanford lost the MPSF Championship in sudden death to the No. 2 Trojans, 9-8, on Sunday afternoon.

Stanford (20-2), the only school to appear in all 18 NCAA championships since their inception in 2001, will learn its seed during tomorrow’s selection show on NCAA.com at 5 p.m. PT. The 2019 National Collegiate Women’s Water Polo Championship will be hosted by the Cardinal from May 10-12 at Avery Aquatic Center. Tickets are on sale now by visiting gostanford.com/tickets.

A runner-up MPSF Tournament finish isn’t an indicator of NCAA success, at least for the Cardinal. Despite winning five of the past eight national championships, 2014 was the only season in the past 13 in which Stanford won a conference crown.

In a game that featured five ties, Stanford went up by two, 8-6, midway through the fourth quarter when Aria Fischer drew an exclusion and passed it back to Sarah Klass in front. Klass beat the keeper with a skip to the left post and the Cardinal was up by more than a goal for the first time since the early moments of the second period.

USC (26-1), however, would respond with the game’s final three scores. A lead pass from Bayley Weber sprang Hauschild free at 4:13 and she scored to make it 8-7. Their roles were reversed at 3:07 and Hauschild fed it to Weber inside, who brought the teams level yet again.

Stanford goalkeeper Emalia Eichelberger, who made a career-high 16 saves, had a number of huge stops late to send the game into overtime. She turned away Alejandra Aznar 1v1 following a long outlet at 2:45 in the fourth and did it again to Kelsey McIntosh with 10 seconds remaining in regulation.

Neither team scored in the first of two, three-minute overtime periods, but just over two minutes into the first period of sudden victory, Hauschild was forced to let in rip from 10 meters with the shot clock nearing zero and skipped it in for her fourth of the day.

Ryann Neushul nearly won it for the Cardinal in the first overtime period when she faced Amanda Longan 1-on-1, but her lob over the USC goalkeeper was batted back into play before the ball crossed the line.

The last time the NCAA Championship was played at Avery in 2015, Stanford became the first host institution to win a national title in its home pool.

One of either the Cardinal or USC has won each of the last nine NCAA titles.