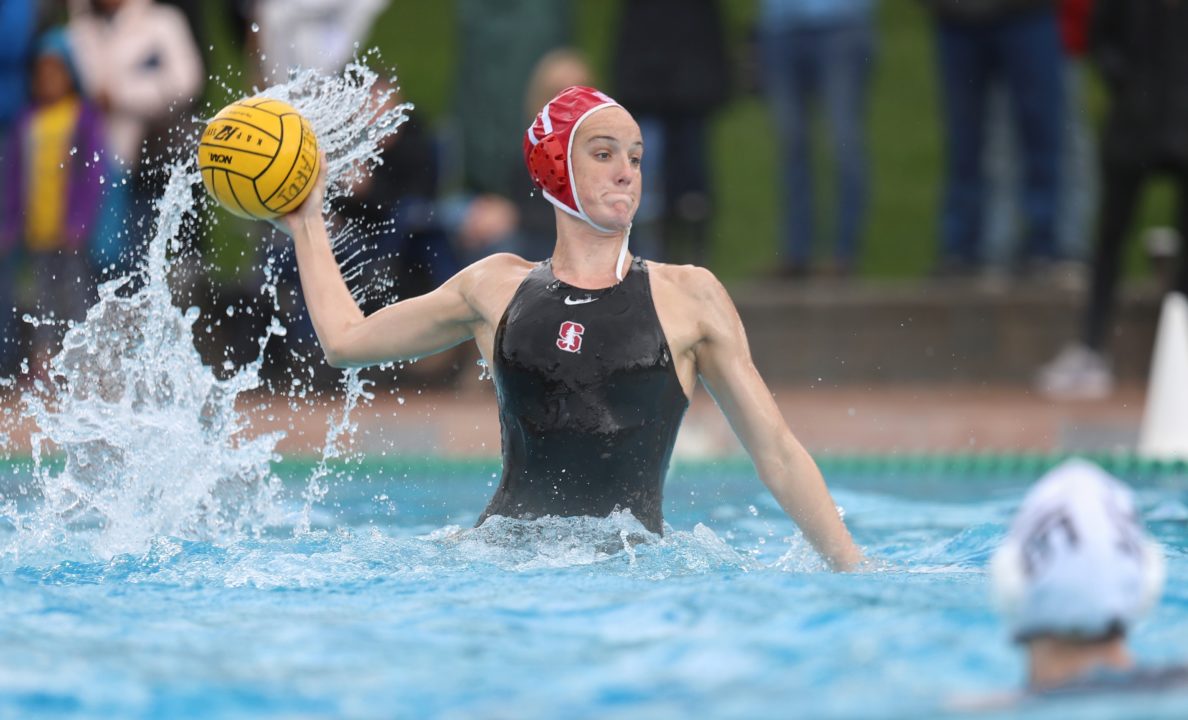 No. 2 Stanford held No. 1 USC scoreless in overtime and Makenzie Fischer notched a hat trick to lead the Cardinal in a 9-8 victory, Saturday, at Uytengsu Aquatics Center. Current photo via Stanford Athletics, Maciek Gudrymowicz/ISIPhotos.com

LOS ANGELES – No. 2 Stanford held No. 1 USC scoreless in overtime and Makenzie Fischer notched a hat trick to lead the Cardinal in a 9-8 victory, Saturday, at Uytengsu Aquatics Center.

Trailing 7-4 going into the fourth quarter, the Cardinal scored four in the final frame and held an 8-7 lead. With 38 seconds remaining USC’s Denise Mammolito scored the equalizer to send it to overtime.

Makenzie Fischer went cross-cage for her third goal midway through the first overtime, which proved to be the game-winner. It was her 13th multi-score effort in 15 games played this season. The Trojans were without Paige Hauschild who fouled out in regulation.

Stanford out shot USC, 33-31, while both teams scored five goals on power plays. USC finished with 12 exclusions to 10 by the Cardinal.

Redshirt sophomore goalkeeper Emalia Eichelberger finished with 11 saves for Stanford, including a penalty shot by Mammolito in the third quarter.

Freshman Ryann Neushul put Stanford on the board at 5:57 in the second quarter. The rookie scored again with 2:04 remaining in regulation to knot it up at 7-7.

Senior Madison Berggren and sophomore Sarah Klass scored back-to-back goals in less than a minute early in the fourth quarter to spark the Cardinal comeback.

The win avenged Stanford’s only loss on the year, a 10-8 USC victory in the championship of the Barbara Kalbus Invitational on Feb. 24.

USC was led by Kelsey McIntosh‘s hat trick, while goalkeeper Amanda Longan had 15 saves for the Trojans.

Up next, Stanford hosts No. 3 UCLA on Saturday, April 6 at the Avery Aquatic Center on Pac-12 Networks.

LOS ANGELES, CALIF. — The No. 1 USC women’s water polo team went to overtime against No. 2 Stanford, falling for the first time this season with a 9-8 loss to the visiting Cardinal today at Uytengsu Aquatics Center. The Trojans had led by three entering the fourth quarter, which is where the Cardinal found its scoring touch to rally back. In overtime, Stanford got the goal it needed and hung on to claim the MPSF win with the OT decision. USC goes to 20-1 overall and to 2-1 in MPSF play as the Trojans saw a 36-game win streak come to a close today. Stanford improves to 15-1, 3-0.
USC’s defense was up to the task in the first frame, silencing the Cardinal while freshman Tilly Kearns came up huge with two goals — the first a fake and fire for the opening goal, and the second a 6-on-5 slam off a feed from fellow freshman Grace Tehaney. Paige Hauschild wrapped the first with a steal, and the hosts gripped a 2-0 advantage early. In the second, junior Kelsey McIntosh and senior Courtney Fahey roared two life, with Fahey earning back-to-back exclusions. McIntosh zipped in the first to answer a power play strike from Stanford. And Fahey finished off the next with a blast out of set to take the Trojans ahead 4-1. Stanford would strike again with a bar-in goal after pulling even on a power play, but McIntosh had another big goal laying in wait, turning and wheeling in a score from the post to pump USC up to a 5-2 lead. Amanda Longan made a huge save to wrap the first half, securing that three-goal margin for the Trojans entering the third.
USC would misfire on its first two 6-on-5 opportunities of the third, and Stanford came up with a save on a USC 5-meter penalty that would have given the Trojans a hefty four-goal lead. Stanford struck next with another 6-on-5 finish, making it 5-3 until USC freshman Alejandra Aznar whipped up a power play goal next to get it back to a three-goal lead. Longan would snuff a Stanford 6-on-5 next, but the Cardinal converted on its next change to make it 6-4. Longan’s 10th save of the game came next, and McIntosh’s third goal soon followed, her nearside strike taking the Trojans ahead 7-4. That score would hold through to the fourth, which was where Stanford made its move.
The Cardinal netted goal on its first two 6-on-5 opportunities to carve it to a one-goal game at 7-6 not two minutes into the fourth. Longan squashed the next Stanford power play chance, but the Cardinal punched up two even scores — the second a counterattack finish after Paige Hauschild was handed her third exclusion —  to make it a four-goal rally into the lead for the visitors. Up 8-7 with 1:24 left in regulation, Stanford had its first lead of the game. Kearns got USC up on its only 6-on-5 of the frame next, and Denise Mammolito delivered the equalizer with a cross cage skip that knotted it at 8-8 with 38 seconds left. Kearns came up with a clutch steal on Stanford’s ensuing possession, and overtime was next on the docket.
Stanford struck off the counter with 1:49 on the clock in the first OT, but USC could not answer back. In the next OT stretch, the USC defense held strong again, with Longan hauling in another big save — one of her 15 on the day — and Kearns nabbing another key steal. Again, however, the Trojans were unable to get to the back of the next before time expired on a 9-8 USC loss at Uytengsu Aquatics Center.
Next up for the Trojans is an MPSF journey to Berkeley to take on California at 1:30 p.m. on Saturday (April 6).