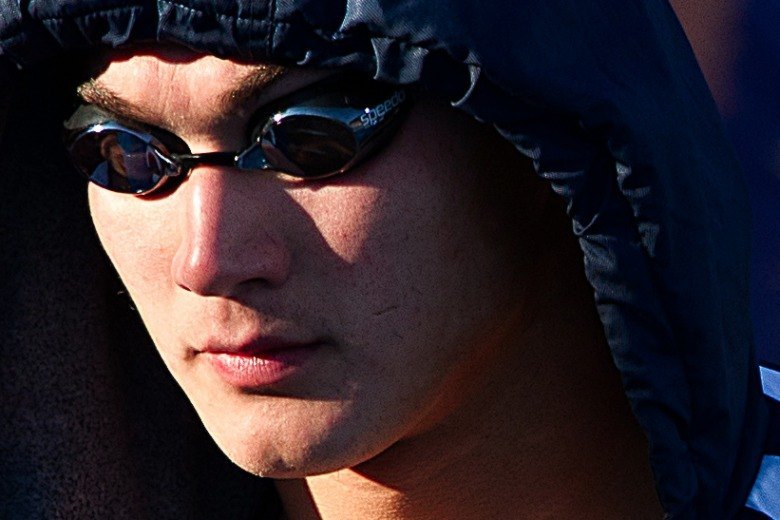 Nathan Adrian, 2012 Olympic Champion in the 100 meter freestyle, is fast, but how does he compare to Mark Spitz and Johnny Weissmuller? (Photo Credit: Tim Binning, theswimpictures)

The above video compares the time progressions of the 100 freestyle from two men who were without a doubt the greatest of their eras, Johnny Weismuller and Mark Spitz, to the defending Olympic Champion in the 100 free, Nathan Adrian, who is vying to be the greatest of his in the post-Phelps years.

100 meter freestyle, the blue ribbon event, is highly desired. Most swimmers want to race it, even if it isn’t their distance.

FINA recognized the event in 1905, but for the first three Olympic Games the event was held in natural bodies of water, not pools.

The 1896 Olympic Games was in the Mediterranean Sea.

The 1900 Olympic Games swimming competition was held in the Seine River.

The 1904 Olympic Games was in a made-man lake (but the event was actually 100 yards, the only time ever in Olympic history).

Time progressed over the years aided by better coaching, education and innovation in stroke and training methods, but technology has always been a big factor. Men donned full body suits with terrible drag until the 1940s and pool design vastly improved over the years. Then men donned full body suits to reduce drag. Wider lanes, overflow gutters and deeper pools reduced water turbulence.

By 2008 suit technology went haywire, beginning the age known as the Suitwars. Speedo launched the LZR, a polyurethane skin through which water didn’t flow. It also added compression and buoyancy. Every other suit manufacturer quickly followed, launching their version of what was essentially a rubberized body-suit boat.  World Records dominoed rapidly, crescendoing at the 2009 FINA World Championships in Rome, which some analysts called the “Plastic Games”.

Today the 100 meter freestyle world record is 46.91, owned by Cesar Cielo of Brazil.  It was captured in one of these polyurethane technical suits.

Nathan Adrian won the 2012 Olympic Games in 47.52. Australia’s James Magnussen was .01 behind in 47.53. Despite analysts predictions that it would take years to break the tech-suited aided 46.91 world record, many now believe the record may fall before the 2016 Olympic Games in Rio.

Am I the only one that noticed Nathan Adrian’s name mis-spelled in the title?

If you’re strictly comparing the 50M and 100M freestyles, Popov was the best. Biondi is probably the best overall sprinter with his prowress in both free and fly.

I wish I could see how good popov Could be if he had not been attacked by a knife..

But I would think of Biondi Weissmuller and Popov..

Pieter van den Hoogenband has to be included in that list. He was the first swimmer ever to make the Olympic final of an event four times, and he did it in swimming’s marquee event. Got great results too – 4th in 1996, gold in 2000, gold in 2004, fifth in 2008. Set a world record in 2000 that lasted until the supersuit era and wasn’t beaten in textile until Magnussen 11 years later.

Well pointed out Bourdais, and on his journey to results Hoogenband managed to beat big names such as Thorpe in his prime. When he lost it wasn’t to bad ones.

Popov deserves a special mention because of his pioneering of controlled tecnique.

Mark Spitz was the best swimmer of the group since he also was a great butterflyer and had an awesome backstroke. Yes, its kind like in backstroke comparing Roland Matthes and Aaron Perisol. I think Matthes won both backstrokes in 1968 and 1972 though.

Disagree. Thought we are reaching the point of diminishing returns and nonlinear behaviour, it is not asymptotic yet. 45 low will happen eventually, maybe sooner with new ultra race pace training methods but absolutely later when the average height increases another 3 or 4 inches from today. The 6’5″ ot 6’7″ sprinter of today will be 6’8″ to 7′ in the future with more power and improved drag coefficient.

I must agree with you, pac12backer, about the significance of height. Just look at the fast guys today: Agnel, Cielo, Adrian, Magnussen, Manadou, Yang. They are huge. Morozov is an exception but the exception proves the rule, and his technique is magnificent. On the Women’s side a similar progress is going on with emerging stars such as Cate Campbell 1.86 m (6 ft 1 in); not a small woman either.

Increasing at a decreasing rate. No on will ever break the 45 second mark, or 46 mark.

I disagree. 44.9 will most likely be swum within 40 years and probably in 20-30 years. The rate at which WRs drop does slow down, but it is a very common mistake to believe that we are living in a special era, such as being within 1-2 seconds of the `ultimate limit’. People of all times have been putting limits on WRs in any sport and they were usually badly off and stunned by what actually happened. Although that is not an argument in itself, it shows that it doesn’t mean much for something to seem impossible. The 100m (textile) WR has been dropping at about 1 second per 15 years in the last 30 years. This may become 1… Read more »

Right now, breaking 45 mark sound ridiculous, but you never know what tomorrow will bring.
A lot of things can be done to brought swimming to another level.Right now, can be rising from the womb someone capable to have Cielo start(at his best, of course), Phelps underwaters and Magnussen best coming home speed.What time a beast like that will do?

we already have 47.1 in textile, 46 is only a second away. sure that’s a lot of time but records get broken. by the time adrian and magnussen are done we could be looking at 46.7. Maybe, if they keep improving

swimming has been a constantly evolving sport. almost every year without fail records are broken, often in boatloads (except in ’96 and ’98 where very few records were set)

consider our sporting rival track. track is pretty simple, all you have to do it run. shoes will improve, tracks will improve but essentially it will stay the same. track is now in a state of near stagnation- many many world records have lasted decades. Currently six world records are… Read more »

Mcgill.. most of the Old World Records at least on the women side are from people everybody know had doped (Florence, Marita, Jarmila.. if yout take a closer look) almost all the women side have strong allegations of doping or are proved dopers who were never caught..

On the men side there are some monsters (Bubka, Sotomayor) but on Track and Field a lot of changes happened on some sports, and you have too many different factors (wind, altitude and others play a much bigger role)

Breaking 45 is definitely possible. There are a ton of advancements in nutrition science yet to be discovered. Finding the distinction between supplement and drug will be much more of a hot topic than the suits were in 2008/2009.
For instance, there are supplements like beta-alanine (ph buffering) or short-chain fatty acids (conserves glycogen stores) which can greatly increase athletic performance. More effective versions of these type of supplements will be available in the coming years. Also, I heard Lebron’s kid is interested in swimming so I guess it’s game over in the sprints.

I am sorry but the greatest ever is Cesar Cielo.

He is the one breaking barriers!

Frédérick Bousquet went a 20 in the 50 before Cielo did.

I believe Biondi was the greatest ever in the 100 free. He redefined the event like no other swimmer has

In 1986 he won worlds by 8 tenths. That’s by FAR the largest margin of victory at worlds. It’s 3 times the average dominance in that event. In 2012 the difference between 1st and tenth in the world was 11 tenths

I totally agree with u ! I remember those olympics very well . Biondi made such a strong impact on my passion for swimming . His relay anchors were as much impressive as his individual races on 100 free . I will never forget those fantastic games and swims . Seing him last year ( thanks to SWIMSWAM ) at the Tiburon Mile 50 free contest was so refreshing and fun .

I am a fan of Cielo, but he is not.
For me, Weismuller is the best freestyler ever.How many guys do you know who ended his swimming life UNDEFEATED?
I will put Dawn Fraser in womens(best freestyler) spot.