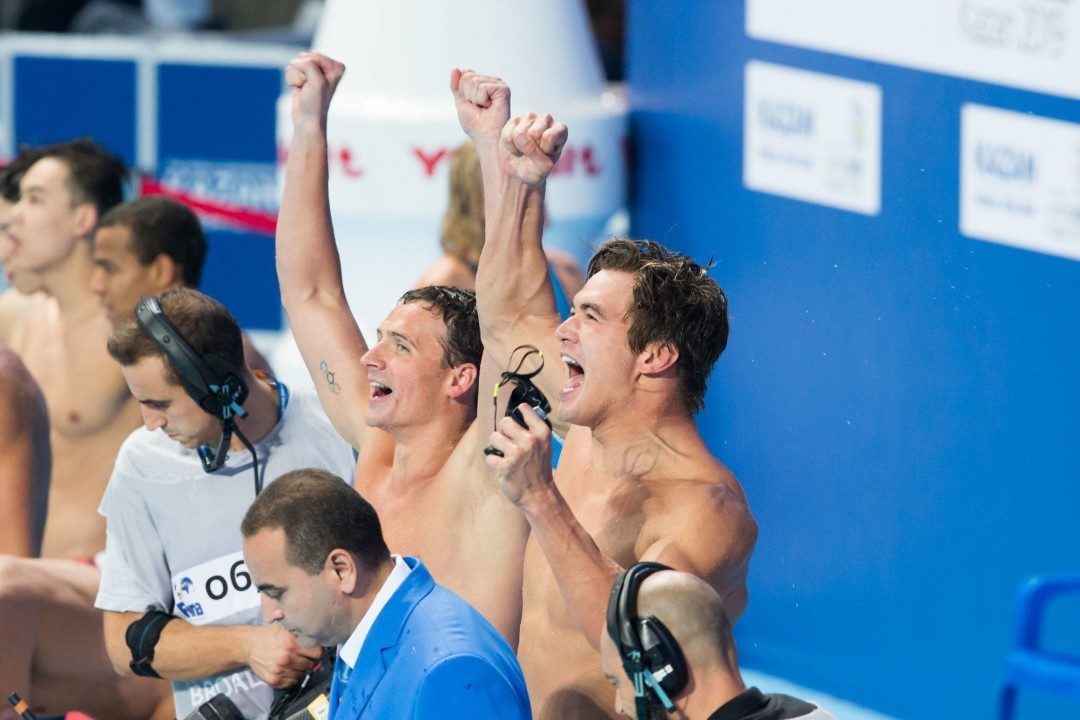 Let's revisit the men's Olympic relay landscape for Rio as we head into the final month of qualification. Archive photo via Tim Binning/TheSwimPictures.com

Late last month we took a look at the countries most likely to compose the Rio roster for men’s relays, given the results from the 2015 FINA World Championships and various subsequent time trials.

Now with even more nations’ Olympic Trials having taken place, including Australia, Japan and Great Britain, it’s worth a revisit of the Olympic relay qualifying placements as they stand today (to the best of our knowledge). Many countries will be gunning for those last 4 spots per event at the upcoming European Championships in May, so these standings are likely to change prior to the May 31st deadline.

*Note, as reported earlier this week, there is an item up for FINA Bureau member vote that has to do with the penalty if a relay-only swimmer fails to compete, which you can read about here.

After the 12 automatically-qualified teams, the additional 4 contenders are unchanged in name at this point. However, at the Australian National Championships, which doubled as the nation’s Olympic Trials, the foursome of James Roberts, Kyle Chalmers, James Magnussen and Cameron McEvoy blew away Australia’s previous best time of 3:16.34 from Kazan.

For 24-year old Magnussen, his performance was especially important, as the 2012 Olympic silver medalist was unable to achieve individual Olympic qualification in the 50m nor 100m freestyle events and is relying on this relay as his only fighting chance to represent the green and gold in Rio.

With South Africa’s swift time trial of 7:12.96 at their Olympic Trials a couple of weeks ago, they now find themselves in the 14th slot and primed for a shot at making the final in Rio. With their sub-7:13 outing, South Africa cut Canada out of the top 16, as the latter sat in the final spot with a time of 7:17.33 from last summer’s Pan American Games. As such, Canada will now be without representation in the men’s 800m freestyle relay in Rio.

Via the top 4 finishers in the men’s 200m freestyle at the British Trials, GBR followed up their 7:04.33 time from Kazan with a total time of 7:06.88 when adding up all of the swimmers’ flat starts. James Guy earned the top spot individually at Trials and proved dangerous once again, earning a time of 1:45.19, just off his National Record.

But youngster Duncan Scott stepped up big-time in Glasgow and may have just earned himself a spot on the Olympic relay should Britain make the final in Rio. Scott swam just in prelims in Kazan and clocked a 1:48.35 flying start.

But just recently the 18-year-old was on fire at Trials, winding up 4th overall individually in the 200m freestyle, clocking a monster personal best of 1:47.31. If he’s able to replicate that performance paired with a relay start, that gives the British another sub-1:48 relay swimmer in their stacked arsenal.

Hungary sneaked into the top 16 by beating previously positioned 16th China, whose time was 7:16.67. Note that Hungary’s time is not yet listed in FINA rankings.

Belarus got onto the board by way of their 3:36.56 outing just last weekend, a mark which now stands as the 2nd-fastest among non-automatic qualifiers. Singapore is holding on to the 16th spot and may find itself safe, although the European Championships are just around the corner and nations such as Spain and Switzerland will be gunning for the opportunity to get their nation’s name on the list to contest the event this summer in Rio.

Note that Hungary also slid into the 15th spot with their time trial of 3:36.74, however, the time doesn’t yet appear within FINA rankings. That performance ousted the previous 16th placed team Singapore.

Aquabullet – Thanks! TTs aren’t in FINA rankings yet, so missed that one. Added now, which bumps Greece off the list.