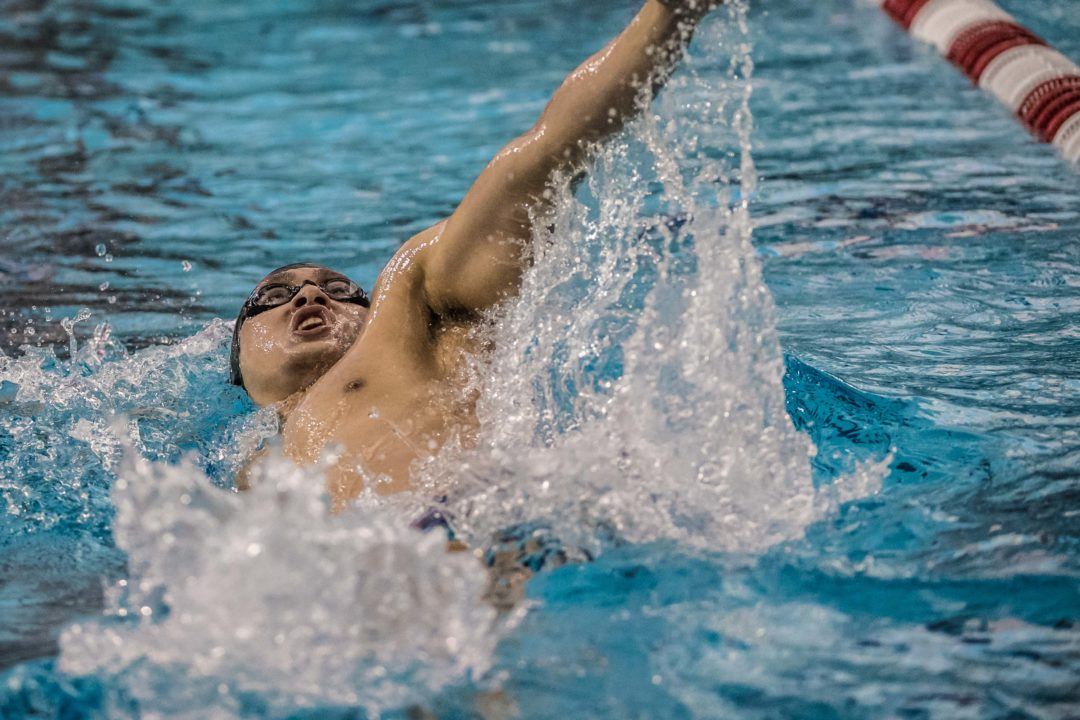 The 24-year-old attained permanent residency in Singapore, and was rejected deferment of National Service while attending Ohio State in the U.S. Archive photo via Mike Lewis/Ola Vista Photography

Lim, 24, pleaded guilty to two of three counts under the Enlistment Act for remaining outside of Singapore without a valid exit permit for two separate periods totalling almost three years.

Addressing the court, Lim said he was “deeply regretful” of his actions, and that he was “too focused on swimming (and) couldn’t resist the temptation of a Malaysian scholarship to study at a prestigious university to further (my) career.”

Lim, who had a successful four-year career at Ohio State University, first came to Singapore in 2010 at the age of 13, studying under scholarship at the Singapore Sports School. He was later granted permanent residency under the Foreign Talent Sports Scheme, and therefore, was required to enlist for National Service (NS).

After initially being granted deferment for NS in 2014, in order to study at Republic Polytechnic in Singapore, Lim was offered a scholarship to pursue studies in the United States at OSU, and left the country in July 2014. His application for deferment from NS in order to study abroad was rejected by the Ministry of Defence, as were subsequent applications submitted by his family.

Lim briefly returned to Singapore in 2015, undergoing his NS medical screening out of fear that he might be unable to return to the country for the 2015 Southeast Asian Games. Upon heading back to the U.S., he continued to unsuccessfully apply for NS deferment, and ultimately claimed he wanted to renounce his permanent residency because his requests were not granted.

He failed to report for enlistment in November 2015, and only returned to Singapore upon finishing at OSU in June 2018.

“He said that he wanted to resolve his NS offences because he intended to swim competitively in Singapore and pursue a career in Singapore in the future,” Deputy Public Prosecutor R Arvindren told the court.

“I strongly encourage young men to look forward to NS and to serve it diligently as (it is related to) Singapore’s security,” Lim said.

Lim had a successful international career representing Malaysia, including racing at the 2013 and 2015 Long Course World Championships, and the 2014 Commonwealth Games.

At Ohio State, Lim was an NCAA Honorable Mention All-American in 2016, helping the Buckeyes to an 11th place finish (and school record) in the 400 medley relay while also placing 35th individually in the 200 fly.

Now out of the adultescent NCAA bubble ,he is in the real world & in prison.

First sentence was sarcastic If anyone didn’t get that.

Singapore is well placed to provide Peace Keeping forces throughout Asia . They are disciplined ,speak a variety of languages & are geo politically smart. I mean really we could not send USA or France or GB.or the Netherlands or Japan. Who you gonna call? .

Imagine having to apologize for not wanting to be in the national service. What a strange authoritarian law.

Makes registering for the draft not seem all that bad. 🇺🇲🇵🇷

At face value I agree with you, mandatory service is a very authoritarian approach. However, consider all the terrible situations troops can be forced into, not to mention the lack of support for vets afterwards. Now, consider what would happen if everybody, including people in power and those close to them, were forced to serve alongside those from a different socioeconomic background. I’m sure there would be a lot more second thoughts on what the military is sent to get involved in. Singapore might be onto something.