Beyond The Lane Lines: Adam Peaty Does Wimbledon 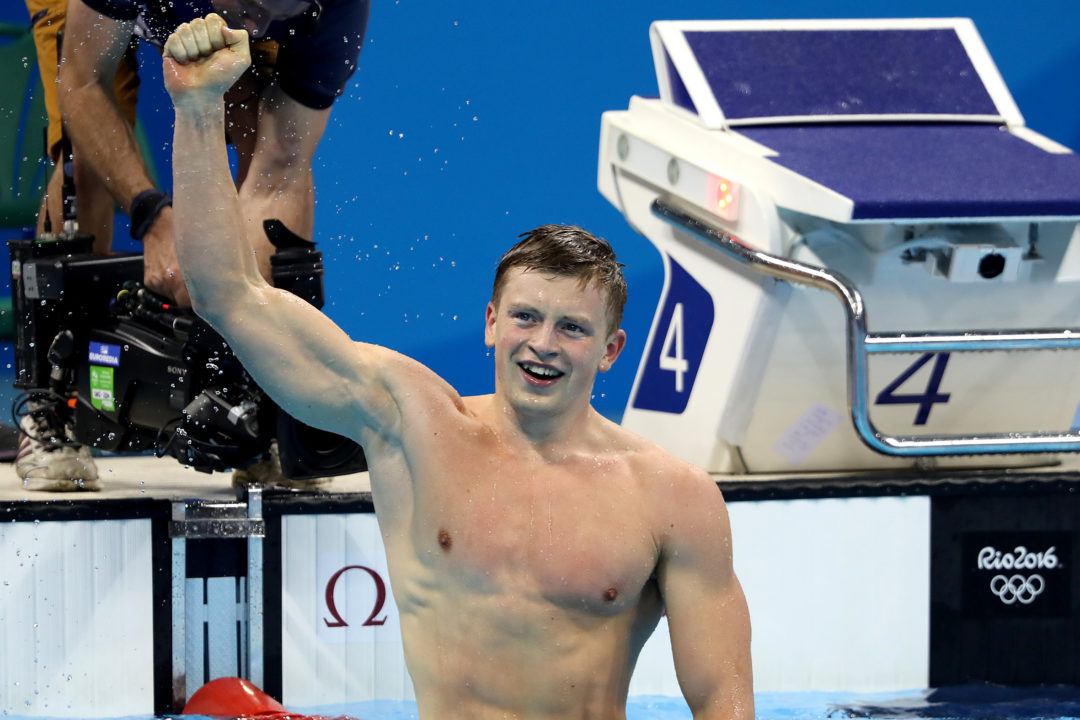 British superstar Adam Peaty wore a different kind of suit as he waltzed into the Royal Box of Wimbledon this week. Archive photo via Simone Castrovillari

British Olympian Adam Peaty highlights this week’s edition of Beyond the Lane Lines, your source for stories on your favorite swimmers outside of their aquatic habitat. Enjoy a blast from the past with news on retired U.S. athletes Amanda Beard and Rebecca Adlington as well as Danish sprinter and Rio medalist Jeanette Ottesen.

We’re in the midst of the 2017 edition of Wimbledon, the oldest tennis tournament in the world, which takes place at the All England Club in Wimbledon, London. July 8th was deemed ‘Super Saturday’, where the elite tennis event attracts athletes from other sports as spectators, complete with the nation’s highest achievers being invited to elite ‘Royal Box’ seats. Reigning 100m breaststroke Olympic champion and world record holder Adam Peaty was among sporting royalty introduced to the Centre Court crowd on Saturday, in a tradition showing mutual respect among the great British talent. Below is Peaty “The Lion” looking dapper in the Royal Box.

4-time Olympian Jeanette Ottesen has announced on her blog that she and boyfriend Marco Loughran are expecting their first child together. In her announcement, Ottesen states that she is not ready to say good-bye to her career just yet, but that she will be focused on becoming a new mother, something that she says was completely unplanned. The 29-year-old describes finding out she was pregnant as ‘the wildest, weirdest, happiest and also one of the most nervous moment of my life.’ Ottesen says she has 5 1/2 months remaining in her pregnancy and will keep her blog updated along the way.

Ottesen won bronze in Rio as a member of Denmark’s 4x100m medley relay and won silver in both the 50m and 100m butterfly events at the 2015 World Championships.

American Olympian Amanda Beard made an appearance this week at the 4th Annual SWING for a Solder Golf Tournament in Gig Harbor, Washington. The four-person scramble formatted tournament was set to benefit the ‘Permission to Start Dreaming Foundation’, an organization which helps veterans suffering from post-traumatic stress disorder. Of her participation at the event, 7-time Olympic medalist Beard stated, “I am honored to support the Permission to Start Dreaming Foundation,” Beard said. “I challenge all local golfers to take me on as we raise funds to help our local veterans with PTSD.”

Beard says she can relate to PTSD as she suffered many ups and downs within her aquatic career, including depression, bulimia and drug abuse.

“We (people) get into this mindset where we don’t want to be a burden on someone, or don’t want people to think differently of us,” Beard said. “But when we start opening up and talking about these things, so many other people have similar experiences and issues. I think that was really a healing process for me.”

Retired British Olympic medalist Rebecca Adlington will try her hand at competitive cooking, as the BBC has announced the former freestyle ace is cast on this year’s edition of the reality TV series, Celebrity MasterChef. The 28-year-old mom will be competing against opera star Lesley Garrett, 7-time World Snooker champion Stephen Hendry, and French tennis player Henri Leconte, among several other celebrities.

BBC Commissioning Editor, Carla-Maria Lawson, says: “Celebrity MasterChef is an astonishing test of culinary ability from people who are not recognised for their talents in the kitchen. Every year we are blown away by celebrity’s gastronomic prowess and this year doesn’t disappoint. The line-up is one of the strongest we have ever seen and we hope it will entertain and tantalise viewers in equal measure.”