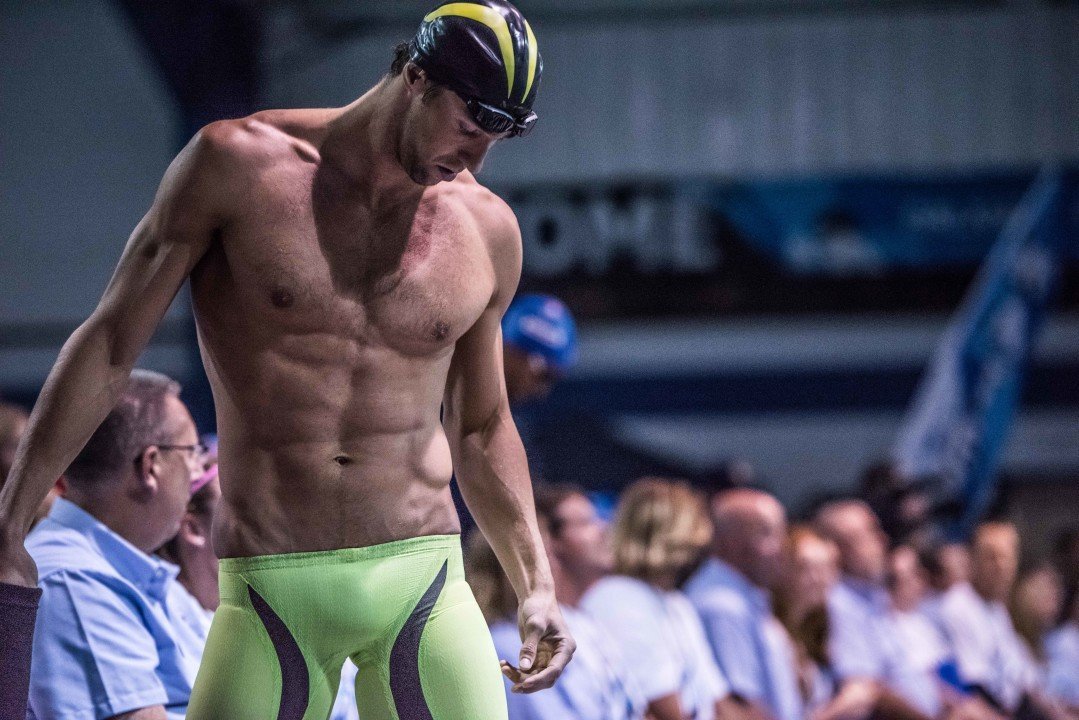 Teammate Allison Schmitt, a 6-time Olympic medalist, hung in the background making a salad and veggies.

Phelps floated through the online video message (nearly 30 minutes).  Boomer, his new baby boy, had eaten and was resting in the background.  Phelps was just taking a break to talk to us, but would be pitching in on the food prep, grilling up some chicken.  Phelps added — revealed — he doesn’t eat all that much. This might be a surprise to some. On the run-up to 2008 and 2012 Olympics, media endlessly ran stories about his daily consumption of 10,000+ calories. Phelps said he eats what he needs, another indication that with age he’s dialing-in his life, training and overall health, striving for balance.

Phelps is chill.  He’s looks about as relaxed as we’ve ever seen him–and happy.   Phelps loves being home, though he doesn’t share too much of that.  We only get tiny glimpses of his pad, a little more of his game room.

Phelps’ last in-season swim meet before U.S. Olympic Trials will be in Austin, Texas in early June, the 3rd through the 5th.  Phelps is rocking a gnarly beard.  He may or may trim his monstrous face mullet…

I say- Don’t do it. Go for the biblical Moses-look.

AUSTIN MEET IN JUNE: Phelps tested his speed at the same meet before the 2012 Olympic Trials.  See the video interview below from that pre-2012 Olympic Trials competition where he talks about his favorite races over his long career.

As a longtime MP fan (I’ve learned to love watching and following swimming with him since 2000), I really find his transformation amazing. In the past I admit I’ve been sometimes frustrated by some of his interviews for example. It lacked a little bit humanity. I saw too often a machine. Now he talks to his fans very regularly and he looks so relaxed! A happy swimmer is a fast swimmer. That’s scary for his rivals. 😎

And Mel, don’t forget to bring your Camera in Austin to film the races. MP loves swimming there. 🙂

It’s very ironic watching that old Gold Minute from 2012 knowing what we know now about Phelps’ training regimen leading up to London. He seems so bright-eyed and cheerful, and his times seemed to say he was swimming at peak performance. (in season 1:45.7 200 free and 1:54.7 200 fly)

Meanwhile he had taken 10 days off in May due to indifference to the sport.

It says a lot about his potential fitness level at that time, and just how far off he was. Hopefully we see a resurgence in Omaha and later in Rio.

Because of what you noted, I think the odds are good we will see some mind boggling fast swims from MP in the coming months.

Damn, he mentioned that he sometimes grills burgers and fries. It’s only a matter of time before the food police get after him about that.