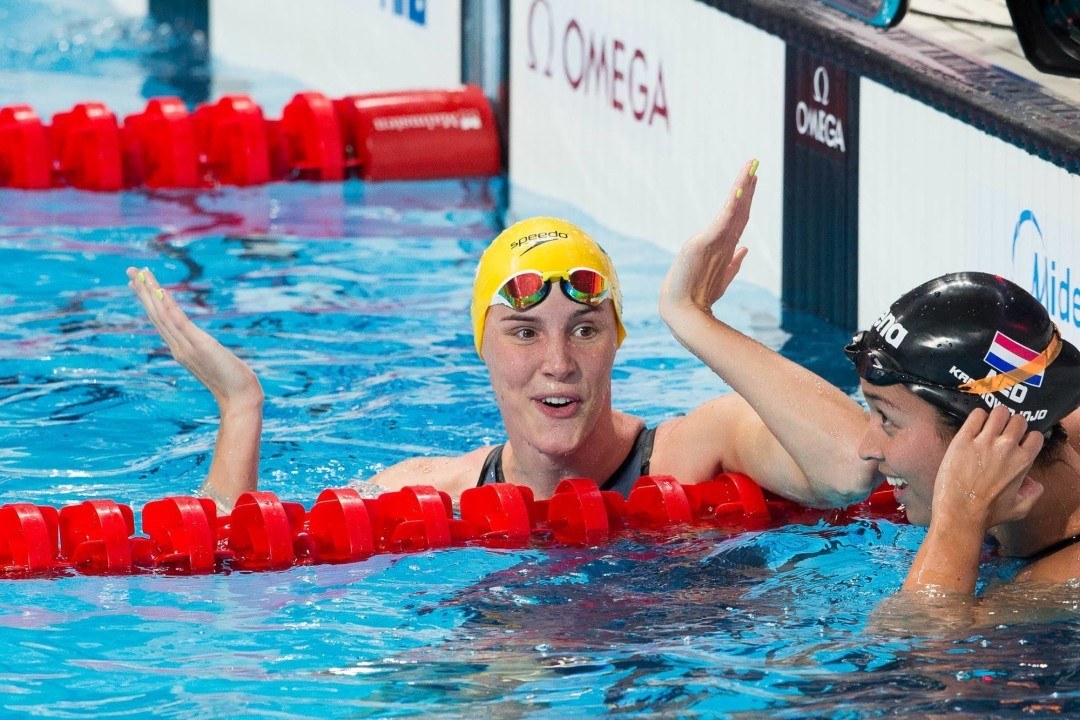 Bronte Campbell is one of six winners of Harper's Bazaar Australia's Women of the Year. Archive photo via Tim Binning/TheSwimPictures.com

Qualtrough Appointed to New Post…..Lawyer, human rights activist and volunteer, Carla Qualtrough, has been appointed to the post of Minister for Sport and Persons with Disabilities for Canada last week. Qualtrough herself is a past Paralympian, having earned three swimming bronze medals across two Olympic Games in 1988 and 1992. Qualtrough comes to the new role with a multitude of experience including having been President of the Canadian Olympic Committee from 2006 to 2010 and serving as Vice President of the Americas Paralympic Committee (APC) in 2013. At the London 2012 Paralympic Games, Qualtrough was the IPC’s Legal Officer. International Paralympic Committee President, Sir Philip Craven says of Qualtrough’s appointment, “Due to her time as an athlete and leading sports administrator, Carla has an extensive knowledge of the Paralympic Movement and how para-sport can contribute towards a more inclusive and equitable society for all. I think she is the ideal candidate for this role. Over the years she has been named one of Canada’s Most Influential Women in Sport on six occasions; arguably she is the now most influential person in Canadian sport.”

Phee Jinq En Breaks Malaysian Breaststroke Record…..While competing at the FINA World Cup in Dubai, the final stop of this year’s series, 17-year-old Phee Jinq En broke Malaysia’s National Record in the women’s 100m breaststroke event. Phee Jinq En’s time of 1:09.64 slithered beneath the previous mark of 1:09.82, previously held by Yi Ting since 2009. Phee Jinq En’s mark came in the heats, where she qualified 10th overall and out of the final, but the swimmer was still pleased with her performance, “I’m so happy to get the national record. I had a terrible time in Doha.” Malaysian National Swimming Coach, Paul Birmingham, was also happy with En’s time, as the swimmer inches closer to the Olympic “A” qualifying time of 1:07.85. “She’s been improving so much in training. The goal was to break 1:10,” said the coach.

Green Bay Pool Saved…..A Green Bay, Wisconsin area group known as “The Friends of Colburn Park” were able to band together and successfully save a pool under threat of closure.  The group’s mission was to raise enough money to repair the city’s Olympic-sized pool.  The pool is home to Green Bay Swim Club and is the only Olympic-sized swimming pool in the Green Bay city. City leaders had agreed to pay $3.5 million for the necessary renovations, but only if the “Friends” could come up with the other $1 million.  According to the community group’s Facebook page, the Friends of Colburn Park was given a recent $20,000 donation, which put them at the $1 million mark.“I’m not at all surprised,” said Green Bay Mayor Jim Schmitt. “I mean the city has a history of stepping up for good projects.”

Bronte Campbell One of Six “Harper’s Bazaar Women of the Year”….. For its 2015 Women of the Year Award, Harper’s Bazaar Magazine Australia has included Dolphins National Team sprinter and double world champion, Bronte Campbell. Campbell earned two individual gold medals in Kazan, topping the podium in both the women’s 50m and 100m freestyle events. The magazine says the recognition is in celebration of women who have been the strongest and most influential in sport throughout the year. Editor-in-Chief Kellie Hush says that Campbell, as well as the the other 5 winners, epitomize “talented, inspiring and successful” women. Of the Aussies’ success in Kazan, Cmpabell states, “Not to talk ourselves up too much – because all hell would break loose if a woman were to have an ego – but we’ve had a few good years!”