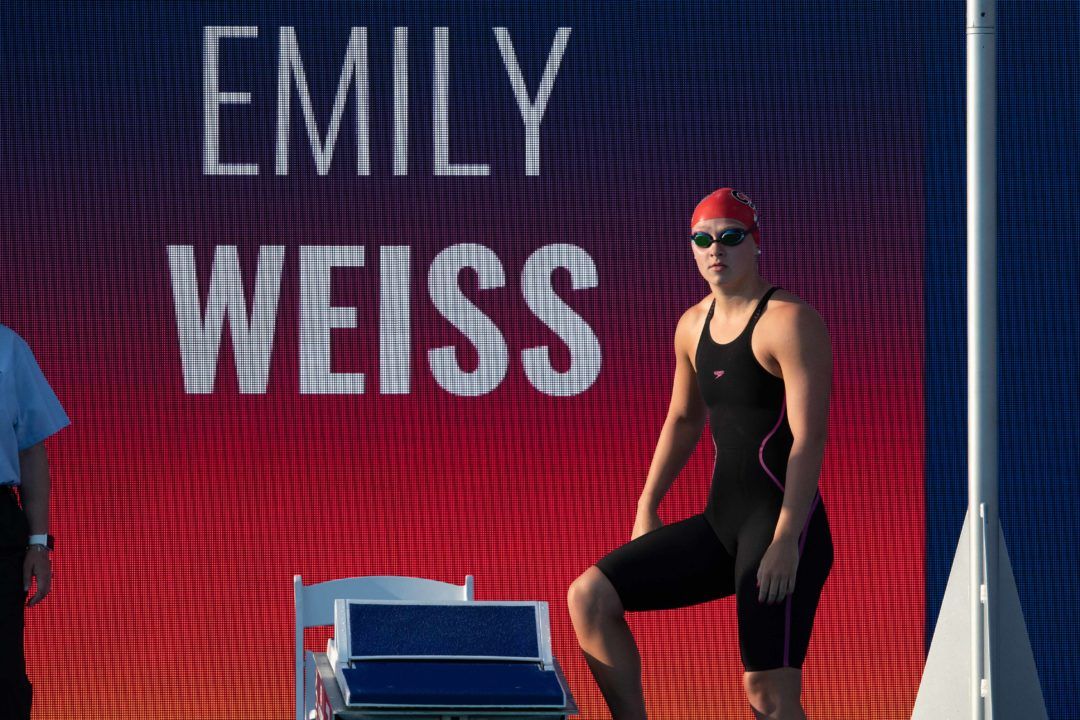 17-year-old Emily Weiss has likely joined the U.S. National Team for next season based on a big swim at Junior Pan Pacs in the 100 breast. Archive photo via Mike Lewis/Ola Vista Photography

17-year-old Emily Weiss has likely joined the U.S. National Team for next season based on a big swim at Junior Pan Pacs in the 100 breast.

One of the below-the-surface storylines of the 2018 Junior Pan Pacific Championships is that it serves as the last of three qualifying meets for the 2018-2018 U.S. National Team. We went over what the national team is and how it differs from the major travel teams in a story you can read here. The major point is that the top 6 American athletes in each event (based on combined times from U.S. Nationals, Pan Pacs and Junior Pan Pacs) make the national team and get various perks, including potential financial support, from USA Swimming.

Weiss has had a pretty roundabout journey to making the projected team. She was disqualified out of prelims of her best event, the 100 breast, at U.S. Nationals, which meant she wouldn’t get a chance to swim the race at either of the remaining qualifying meets. But the DQ was overturned and Weiss ultimately took 7th at Nationals and made Junior Pan Pacs. That still left her outside the national team, though, until she bettered her 1:07.99 Nationals time with a 1:07.55 at Junior Pan Pacs.

That swim moved her up to the 6th spot, passing Breeja Larson, who was previously 6th over the qualifying period with her 1:07.80 from Nationals. Pending any major changes (or times we missed), Weiss should make the national team and Larson will be bumped.

Through two days, there haven’t been any other major changes to the national team roster.

Carson Foster’s 400 IM from Fiji does not qualify for national team status?

1
0
Reply
Jared Anderson
Author
Reply to  He Said What?

4
0
Reply
Speed Racer
Reply to  He Said What?

No. He did not better Swanson who is sitting at the 6 spot.

Swim off times don’t count. Nor does the split in a mixed medley relay.

Great for Emily but bad for Breeja. It would be great if USA Swimming committed to give the National Team money to the top 6 who take the money. With NCAA and high school swimmers not taking money the money just evaporates.