2022 U.S. National Championships: Swims You May Have Missed on Day 3 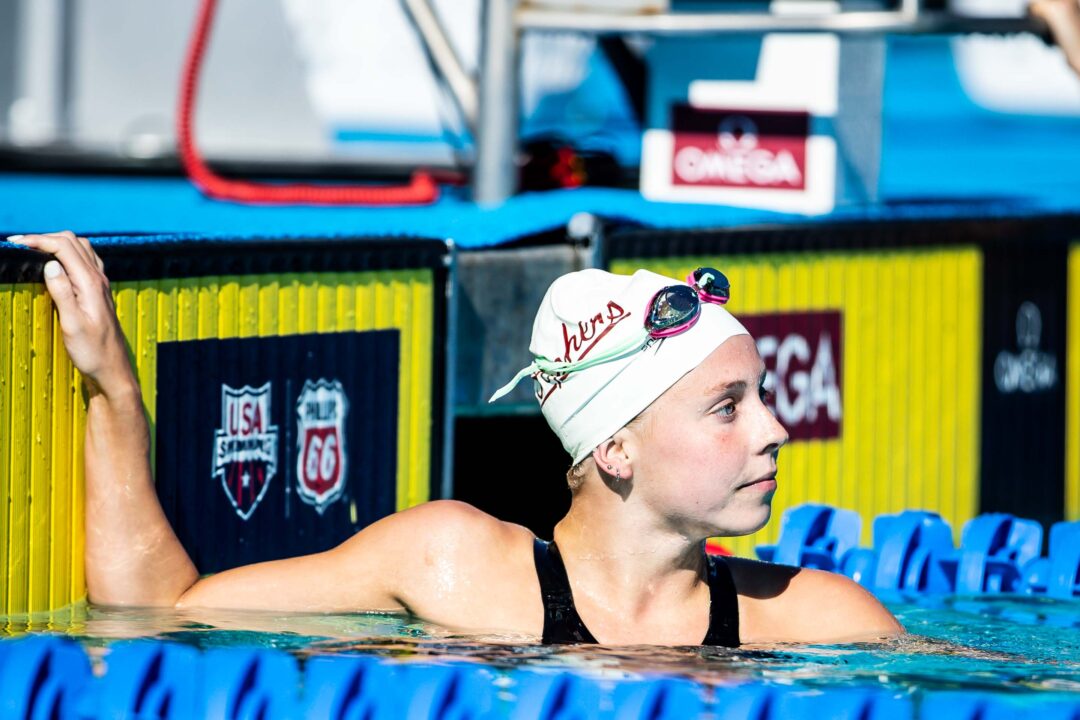 Megan Van Berkom won her second 'B' final of U.S Nats in the women's 400 IM, posting a massive personal best in one of the swims you might have missed today. Current photo via Jack Spitser/Spitser Photography

Day 3 finals featured only two events–the 400 IM and 100 fly–but there were some electric swims, from Katie Ledecky and Leah Smith‘s battle in the 400 IM to Shaine Casas becoming the third fastest American of all time in the 100 fly. However, there were several swims that may have “slipped through the cracks” behind those performances. Here’s some of the top performances you may have missed on the day:

Minnesota’s Megan Van Berkom stormed to the win in the ‘B’ final of the women’s 400 IM. She led through the entire race, holding off late charges from Justina Kozan and Mackenzie Looze. Van Berkom touched in 4:42.69, a personal best for her by over three seconds. That time would have earned her bronze if she’d swum in the ‘A’ final.

She’s had massive improvements in this event this season. Coming into the summer, her lifetime best was 4:50.27, swum in 2019. In June, she took almost five seconds off that time at a local Minnesota meet, swimming 4:45.78. That’s the mark she just beat here, so she’s dropped a total of 7.58 seconds so far this season. To drop time tonight, Van Berkom really improved the first 300 of her race.

With Claire Curzan scratching out of the 100 fly ‘A’ final due to a non-COVID illness, Emma Sticklen got bumped into the big heat. She took full advantage of the opportunity, hitting a new lifetime best of 58.76. At NCAAs, the Longhorn women’s 200 fly dominance pushed them past Stanford on the final day of competition. Sticklen was a key part of that effort, and she’s continued her success in long course, posting a personal best here and in the 200 fly earlier this season.

Her soon-to-be teammate and 200 fly champion Dakota Luther earned bronze in 58.39. That’s her first best time in the event since 2019 Nationals, when she posted 58.48. Luther’s had a strong meet so far, hitting a lifetime best en route to her 200 fly win as well. After a big NCAA meet, Luther has rolled that momentum into long-course, hitting her fastest times in years. She’ll be a huge addition to an already surging Texas fly group.

Ilya Kharun Hits Second PB of the Day in 100 Fly

In prelims, Ilya Kharun blasted 52.35, rocketing up the U.S. all-time fastest 17-18 boys list from 19th to 4th. The time was almost a half a second drop for Kharun, who bettered it in finals, shaving .04 off and finishing fifth overall. 52.31 keeps Kharun fourth overall for his age group, but edges him closer to Ian Crocker‘s 52.25 from 2001.

16-year-old Erika Pelaez continues to climb her age-group rankings. After launching from 39th to 7th in the 15-16 100 free rankings earlier in the meet, Pelaez clocked 59.23 to grab second in the ‘B’ final behind Lillie Nordmann. The swim was a half-second drop for Pelaez, and earns the 20th spot on the 15-16 girls 100 fly rankings. That swim moves her past swimmers like Tess Howley and Charlotte Hook at that age, and puts her within .03 seconds of Elaine Breeden.

Coming off a silver medal and big personal best in the 200 back on Day 2, Ian Grum won the ‘B’ final of the men’s 400 IM. He dropped another big personal best here, cutting five seconds off his entry time of 4:22.86 and posting 4:17.87. Grum took the lead on the first 50 and held onto it the entire way, holding off a charge from Cal’s Jason Louser and Princeton’s Ranak Khosla.

The rising UGA senior is having a strong meet so far, and will race the 100 back on Day 4 for his final event of the meet.

In finals, Clontz was faster than his prelims self in every stroke. The biggest jump came in his breaststroke split, where he dropped from a 1:18.20 to a 1:15.54.

Gophers!!! Next year Megan will do it in the A finals!

Also Katie Crom taking win in D final in 100 Fly. That was a super fun race to watch. She hasn’t really approached her PB’s in her races for a while, but she has this crazy back end speed that is so fun to watch.