With Jacoby Out, Who Will USA Turn to for 4×100 Medley Relay Breaststroke Leg? 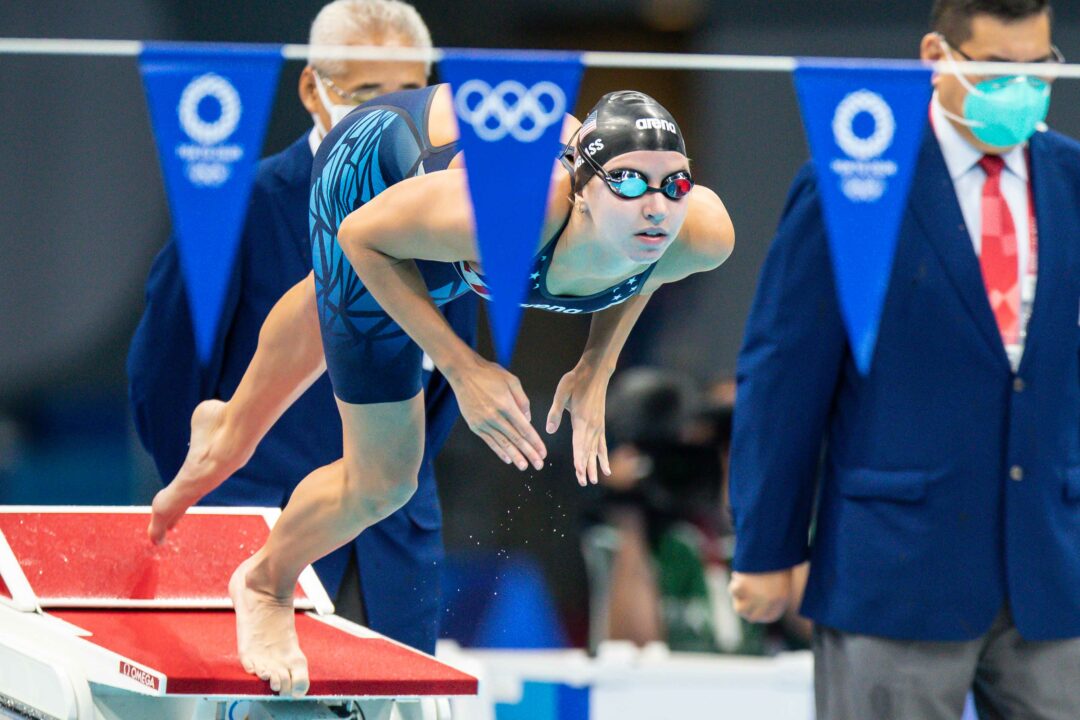 With Jacoby out of the 2021 FINA SC World Championships, Team USA should look to Kate Douglass for the 4x100 medley relay breaststroke leg. Archive photo via Jack Spitser/Spitser Photography

Lydia Jacoby recently was withdrawn from the 2021 FINA Short Course World Championships on Saturday because of COVID-19 safety protocols. The 17-year-old made headlines when she won gold in the 100-meter breaststroke at the Tokyo Olympics, so she was the front-runner to swim the same leg of the women’s 4×100 medley relay finals on Tuesday.

But with her now absent for the Americans, who will Team USA head coach Dave Salo select to replace her?

Before withdrawing, Jacoby was the only American to swim in the women’s 50-meter breaststroke individually, finishing in a time of 30.21 and missing out on finals. She also helped Team USA to second place in the 4×50 medley relay on Friday. In that race she split a 29.62, which was the fifth-fastest breaststroke split in the finals.

Her lifetime best in the short course 100-meter breaststroke is a 1:05.20, which came in October at the first leg of the FINA World Cup. She followed up with a 1:05.40 in the second leg of the competition.

In total, she has not been as good in short course as she has in long course so far in her career, but as the Olympic champion, she was almost guaranteed the nod for the finals relay.

Looking at the American roster, the top three candidates who could take Jacoby’s place are Emily Escobedo, Melanie Margalis, and Kate Douglass. All three swimmers make good cases for swimming the breaststroke leg in the 4×100 medley relay finals. However, Douglass in particular can make a huge impact despite not having SCM experience in the 100-meter breaststroke.

Additionally, Escobedo and Margalis are tabbed to swim in the 200-meter breaststroke, which is on the same day as the 4×100 medley relay. That would certainly open the door to putting Douglass in the breaststroke leg for finals.

She does not have any 100-meter breaststroke times in meters, but she does have times in yards. The University of Virginia (UVA) junior recently swam the 100-yard breaststroke at the Tennessee Invitational before leaving for Abu Dhabi. She finished with a time of 58.64, good for fifth all-time at UVA. If we were to use the NCAA conversion factor chart, her 58.64 would roughly translate to a 1:04.73 in short course meters. Using SwimSwam’s swim time converter, that 58.64 becomes a 1:04.42.

If having Escobedo and Margalis in the 200-meter breaststroke opens the door for Douglass, then these converted times should slam it open.

She also swam prelims for the women’s and mixed 4×50 medley relay, but was replaced in both finals. In the women’s relay prelims, she swam 23.43 on the freestyle leg. For finals, she was replaced by Abbey Weitzeil who went 23.10. In the mixed medley relay, Douglass swam the fly leg in prelims and finished with a time of 24.60. Claire Curzan replaced her in the finals and went 24.85.

Overall, Douglass was bumped from those relays because she was not selected to the team in those individual strokes: in fact, she is only entered individually in the 200-meter IM. American relay selection dogma often cedes spots to stroke specialists, and so a swimmer like Douglass, who is so versatile especially in short course, and who has shown form in previous relays, can be overlooked, even in instances where she might improve the team’s performance.

Margalis, meanwhile, has already raced in the 400-meter IM at this competition. In spite of questions about her training coming into the meet, she was just 2 seconds short of her best time when she swam 4:26.63, good for third place. She has also qualified for the semifinals of the 100-meter IM.

Escobedo has not raced individually yet at this meet. Thus far, she has only swam in the prelims of the women’s 4×50 medley relay, splitting 30.32. She was replaced by Jacoby in the finals.

Knowing the tradition of American relay selection, the team will more than likely turn to Escobedo because of her personal best time. However, Douglass is the strongest candidate to swim the breaststroke leg of the 4×100 medley relay this upcoming Tuesday. Her converted times and strong performance in Abu Dhabi thus far should make her case strong. Escobedo and Margalis competing in the 200-meter breaststroke should make her case stronger.

American relay dogma is not prepared for a versatile swimmer like Douglass.

Based on recent lineup choices, I’m going with… Grimes?

I think they should put MA on the breaststroke

Margalis for the preliem and Escobedo for the final.

douglass’ sprinting surely is on fire this weekend

‘American relay dogma is not prepared for a versatile swimmer like Douglass.’
Given recent relay selections in not sure our coaches would make the right choice if they had world record holders in all 4 spots.

You are not wrong.

Why do I feel like this will make the race more exciting because Jacoby is not suited to SCM. The battle between US-Canada-Sweden just got a whole lot better!!