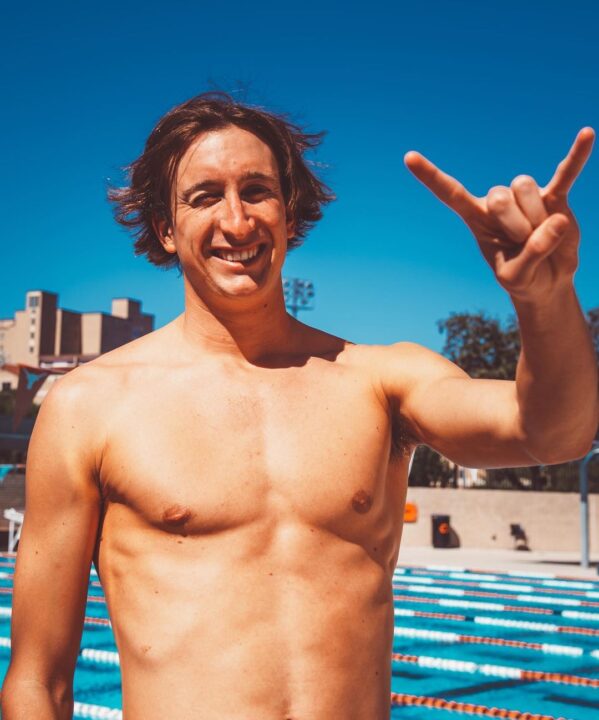 5th year transfer Cameron Auchinachie (above) now has the fastest 50 backstroke in University of Texas history after a 20.63 on Wednesday. Archive photo via Texas Athletics

The Texas Longhorns are the defending NCAA Champions in men’s swimming & diving, and this year’s team looks even better, and deeper, than the one that qualified 26 athletes to last year’s NCAA Championship meet.

That depth and quality was on display on Wednesday in the opening session of the Minnesota Invite, especially in the 200 medley relay.

If we take the best legs from Texas’ two 200 medley relays and samsh them together, this is the resultant relay:

That adds up to a 1:22.89 that would have placed 7th at last year’s NCAA Championship meet.

The Longhorns are not an overwhelming NCAA favorite in this race by any account – especially with another year of timed finals relays meaning that their depth is less of an advantage. The Longhorns would have to be better on every leg to capture the title in March, and they can be – with the exception of the leadoff Aucnhinachie, Texas returns the three final legs from their 200 medley relay that swam 1:22.56 last season, and all three of those legs were faster at NCAAs.

The ace card here is backstroke leadoff Cameron Auchinachie, who swam 20.63. That’s the fastest-ever 50 backstroke by a Texas Longhorn, improving upon the previous record held by Neil Walker. Walker was once a World Record holder in the 50 backstroke in short course meters.

Editor’s Note: We’re not quite sure what the Walker record was, because Texas’ records sheet doesn’t list it, and the Instagram post announcing that Auchinachie had broken it doesn’t include a time. Walker was 20.87 at the 1997 NCAA Championships, though more recently, in 2017, John Shebat was 20.84, so Walker must have been faster at another meet.

That time from Auchinachie would have been third-best at NCAAs last year, ahead of Shaine Casas (20.67) but behind Kacper Stokowski of NC State (20.61) and freshman Adam Chaney of Florida (20.55). That’s as compared to last year’s leadoff Chris Staka, now graduated, who split 20.98 at NCAAs. That ranked him in a tie for the 7th-best split.

While data for relay splits isn’t perfect, as best as we can tell, that makes Auchinachie now the 7th-best ever in the event.

Auchinachie is a one-year wonder for the Longhorns, transferring in to use his 5th season of eligibility from the University of Denver. Auchinachie was already an NCAA qualifier at Denver and was part of one of the best mid-major programs in the country there. He ultimately withdrew from the team last season, however, after there was a big schism between athletes and coaches/athletics department over COVID-19 protocols.

Their best relay mashing those together would be:

Note that the above “best” relay doesn’t include Drew Kibler, who was on the U.S. Olympic Team in the 800 free relay. He was 1:33.25 on a leadoff leg. That’s how good Texas can be in this relay.

While Cal is a bit shorthanded this week, with Hugo Gonzalez and Trenton Julian preparing for Short Course Worlds, if day 1 is any indication, the Longhorns have taken firm control of the NCAA Championship title chase.

Correction- The Indiana Hoosiers have firm control of the NCAA Championship title race.

As firm as a bowl of spaghetti

Not even the best team in their conference

Cal doesn’t seem as rested, just look at Lasco’s splits. And beyond just Julian and Gonzalez, their Olympian Mefford looks to be returning next semester; that’s 3 good legs of an 800 relay right there. Texas has the depth but Cal has the star power. I’d say they still have a great shot.

Ha yeah good call, Texas has stars for sure. It seemed like Cal has more individual event title contenders but maybe with Hoffer gone there isn’t as big of a gap this year

Valid point! Rest of this meet will be fun to watch and so will NCAAs.