The Re-Emergence of Philippe Lucas 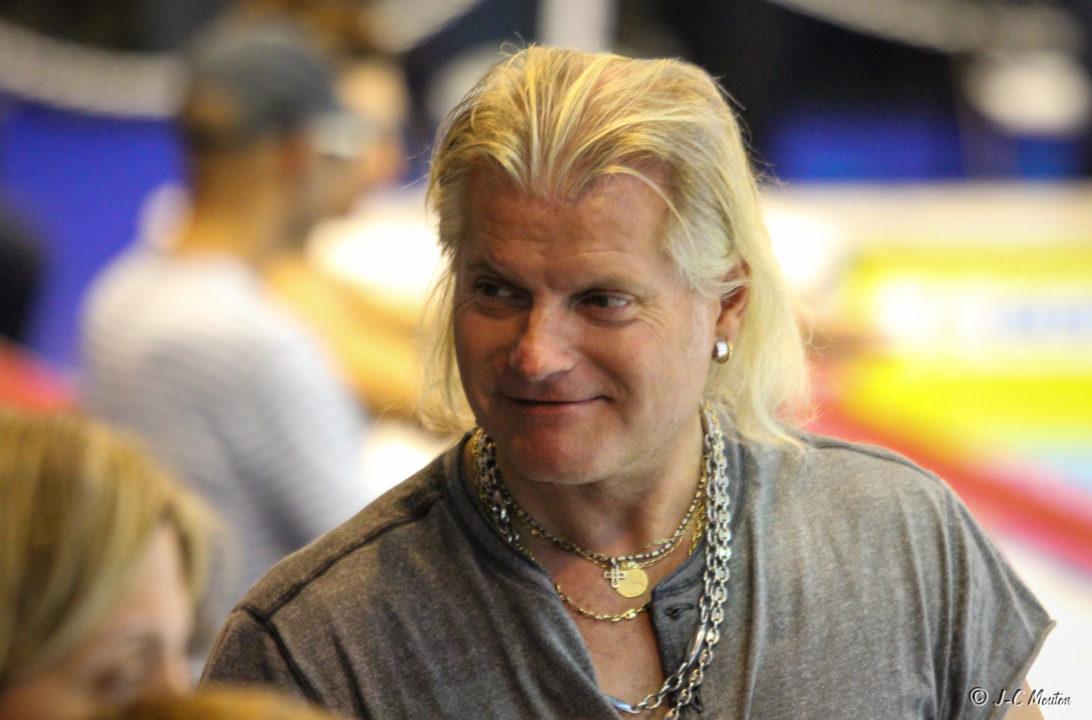 French coach Philippe Lucas is at the top of his game, with two of his athletes (Marc-Antoine Olivier and Aurélie Muller) winning the first two swimming gold medals in Budapest for the men's 5km and women's 10km, respectively. Stock photo via Jean-Claude Mouton

The 17th FINA World Championships has awarded two medals so far, and both of the athletes –Marc-Antoine Olivier and Aurélie Muller– are products of the coaching genius of France’s Philippe Lucas.

Lucas has never shied away from the limelight. On the contrary. He has strong opinions and he’s always happy to share them. Without any filter, and often without the 3-second lag that allows broadcasters to clean up his colorful language.

Lucas’ fame first extended beyond the French border when his protégée Laure Manaudou rose to international prominence winning the 400 free at the 2004 Olympic Games in Athens. The 17-year-old also earned the silver medal in the 800m free and the bronze in the 100m back. Since then, Lucas has been at the helm of groups that have included at various times over the years, Luca Marin, Federica Pellegrini, Filippo Magnini, Anthony Pannier, Sharon van Rouwendaal, Amaury Leveaux, Aurélien Leveaux, Camelia Potec, and Benjamin Stasiulis.

He is known as a tough coach, who believes “If you don’t work, you won’t succeed. That’s for sure. If you work, it’s not certain that you will succeed.”

For someone who joked, at a conference for French coaches in October 2015, that he didn’t know much about open water swimming and was in the bar when Aurélie Muller came to the finish line to win the world title in Kazan, Lucas has developed an incredible “stable” of open water swimmers. Both France’s entries in the women’s 10km in Budapest on Sunday, Muller and Océane Cassignol, train under Lucas. In addition, his group in Narbonne also includes Femke Heemskerk, Benoit Bebast, and until May, the young Belgian star Eva Bonnet.

Happy birthday to my coach! He is the hardest but he is the best coach! ?? #PhilippeLucas #BirthdayBoy – https://t.co/uvyXCN8iCA

Correction about what I’ve written yesterday. Philippe Lucas leaves Narbonne and will train his swimmers in Montpellier from next September.

How does he get paid well in such small towns/clubs?

You go to London to drive the bus? 😆
If Leveaux skips the pratice one morning, what I am doing? I mow the lawn? 😆

I find Lucas immensely entertaining, and a great hard ass coach to boot. I wish we had more top tier coaches with that sort of attitude here in the U.S.

French society is far more accepting of his athlete relationships than the US would be .

I get your drift.

‘You’re in great shape – beautiful ‘ France – acknowledgement for a lady able to pull off 1964 chic at 64 . USA – uproar & a diagram by REEBOK as to when saying this might be acceptable – never unless unearthing a Batman toy .

Notice she did not (nor could not) return the compliment.

The mos colorful and perhaps the best swim coach in France. His YouTube videos are priceless! I wish he trained high level male swimmers as France is in a transition period.

He’s not comentating this year for french broadcast, I’m gonna miss him and his no BS language…