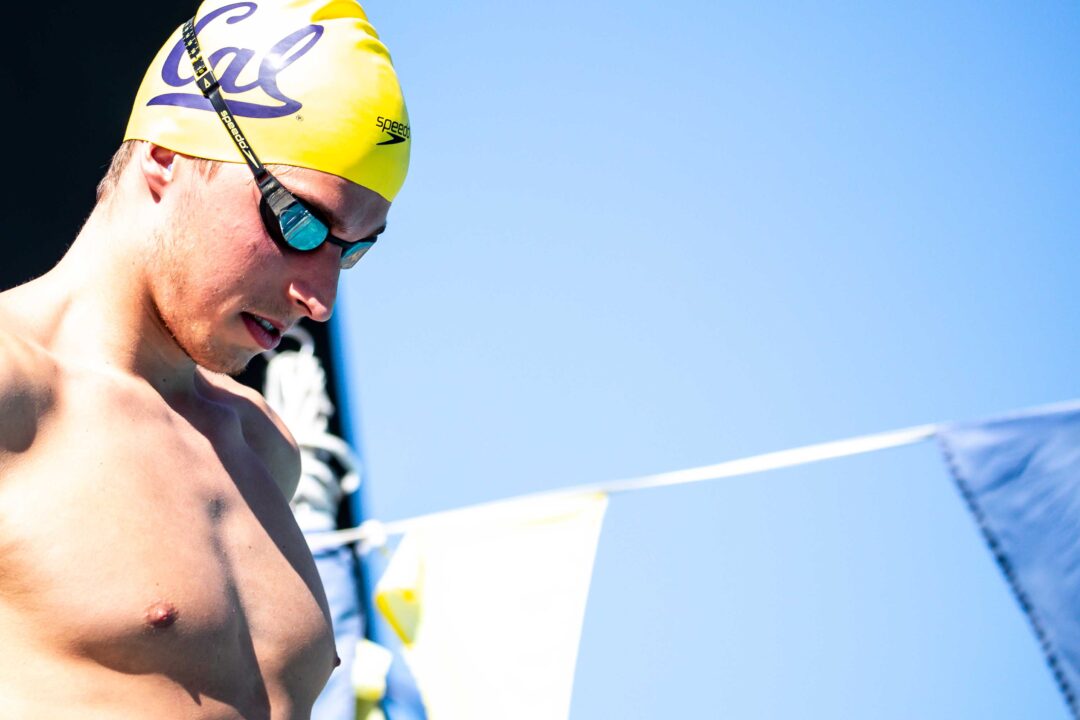 Cal's Bjorn Seeliger is the top-seeded man in the 50 free tonight, and is looking to capture his first individual conference title. Archive photo via Jack Spitser/Spitser Photography

Arizona’s Brooks Fail, who holds the top time in the 500 free this year, looks to improve upon his mid-season time of 4:10.32 tonight. He sits as the second seed following prelims and is up against top-seeded Preston Forst of Stanford and Forst’s teammate and 2018 and 2020 champion Grant Shoults, who is the fifth seed. Notably, Trenton Julian, the defending champion from last year, failed to make the A-final after finishing 9th in prelims and will be swimming in the B-final tonight.

The 200 IM is a stacked field led by Arizona State’s Leon Marchand, who won the prelims with a time of 1:40.90 that would have been the second-fastest time in the event this year had it not been for his 1:40.80 personal best from mid-season. Marchand’s teammate Grant House, Stanford’s Ron Polonsky, defending champion Hugo Gonzalez of Cal, and Gonzalez’s teammates Destin Lasco and Jason Louser will also be thrown into the mix in this event, finishing 2-3-4-5-6 in prelims within 0.5 seconds of each other.

Cal had an impressive showing in the 50 free this morning, with all of their swimmers getting under 20 seconds. This sprint group will be led by Bjorn Seeliger, who finished second at both Pac-12s and NCAAs to his now graduated teammate Ryan Hoffer last year, and is vying for the crown this time around. Seeliger is the top seed heading into finals with a 18.82, and is coming off of anchoring Cal’s 200 medley relay last night in a blistering 18.27 split. He will be joined by Stanford freshman Andrei Minakov, who touched in second during prelims with 19.24 and is also coming off a fast relay split, going the third fastest 50 fly of all time last night. Arizona State’s Jack Dolan is the third seed, going a little over a tenth slower than Minakov with a 19.33.

The night concludes with the 200 free relay, in which Cal is the defending champion and top seed, as well as the conference and meet record holder.

Stanford is keeping the good times rolling, taking 1st, 3rd and 8th in the championship final of the 500. Sophomore Preston Forst led the way, swimming a 4:12.06 to establish his 2nd personal best of the day in the event. With the swim, Forst now ranks 8th in the NCAA this season.

Forst did battle with Arizona’s Brooks Fail, who swam a season best of 4:12.06 for 2nd. Fail is now 9th in the NCAA this season in the 500. After taking the first 100 of the race out just 0.07 seconds apart, Forst began to open up a lead little by little on Fail, until he flipped at the 400 mark nearly 2 full seconds ahead. Fail came back on the Cardinal sophomore fiercely, but ended up just barely getting beat out at the touch.

Grant Shoults took 3rd with a significant season best of 4:13.87.

Arizona State’s Julian Hill led the B final with a 4:13.18, clipping his previous personal best of 4:13.23, which he set earlier this season at the NC State Invitational. Hill led Cal’s Trenton Julian, who swam a season best 4:14.10, although the time was well off his personal best of 4:09.49, which he swam at last year’s Pac-12 Champs.

Holy smokes! ASU freshman Leon Marchand tore to a new personal best, bringing the Pac-12 Championships record down under 1:40 for the first time, as well as the ASU team record. Marchand was phenomenal on freestyle and backstroke tonight, blazing home in 23.80 to pull away from the field. his 24.89 backstroke split also led the field tonight.

With the swim, Marchand is now the fastest freshman all-time in the 200 IM, as well as the first freshman to swim under 1:40 in the event. He’s also the #8 all-time performer in the 200 IM, and his time tonight marks the 10th-fastest 200 IM performance all-time.

Grant House, after his incredible 200 free last night, took 2nd here, swimming a huge new personal best of 1:40.66. His 2nd-place finish marks a 1-2 punch by the Sun Devils, who are absolutely rolling so far in Federal Way.

ASU is also putting together another strong team performance tonight and are making the most of their opportunities. Sun Devil David Schlicht took the B final in a season best 1:43.66, making ASU 2-for-2 on B finals wins so far tonight.

After swimming a season best 18.86 this morning, Cal sophomore Bjorn Seeliger clipped that time tonight, swimming an 18.84 to finish as the only sub-19 swimmer in the field. Seeliger just missed the Championship Record, which stands at 18.80 from 2014, and was also just a hair off his personal best of 18.71 from last year’s NCAAs.

Stanford freshman Andrei Minakov clocked a new personal best of 19.08 for 2nd. The freshman is already beginning to close in on the Stanford program record of 18.87, which was set back in 2007.

ASU’s Jack Dolan was just 0.01 seconds off his personal best, which he set earlier this season at the NC State Invite. Nonetheless, Dolan picked up a 3rd-place finish here, giving the Sun Devils more valuable points.

Stanford holds a 106-point lead heading into the final event of tonight: the 200 free relay.

Cal’s Bjorn Seeliger and ASU’s Jack Dolan both were faster leading their teams off on this relay than they were in the individual 50 free earlier this evening. Seeliger was out in a 18.73, tying his personal best, which he set at last year’s NCAAs. Dolan was out in 18.97, marking a huge new personal best (19.12 previous best), and his first time under 19 seconds in the event. It was also yet another Arizona State program record, and Dolan is now the first Sun Devil under 19 seconds in the 50 free.

Cal would go on to break their own Pac-12 Championships Record, which they set last year. Freshman Jack Alexy was flying, splitting 18.57 on the 2nd 50. He was followed by Daniel Carr in 18.80, then Marcos Rico Peng in 18.90. The swim was relatively close to Cal’s program record of 1:14.46, which also stands as the Pac-12 conference record.

Beyond Dolan, ASU was almost equally as fast as Cal. Grant House swam an 18.81 on the 2nd leg, and was followed by Carter Swift, who split 19.18. Senior Cody Bybee was scorching on the anchor, however, throwing down an 18.44 to drive the Sun Devils home. ASU shattered their previous program record of 1:16.60, which they established earlier this season.

Arizona blew away their season best, picking up an NCAA ‘A’ time with a 1:16.57. The swim also came in just off the Arizona program record which has stood since 2009.

Pac-12 did not come to play

They turned off the reaction times? I didn’t see the relay or else I’m sure i’d be complaining someone left early.

Was the first thing I noticed. From second to last in my one session. Ouch.

They had 3 C finalists and that’s it. So the relay DQ means 0 points for the Utes on day 2. Hopefully, they have a great prelims tomorrow.

I know there was at least one year that Michigan State only scored relay points at Big Tens, but Utah is a much better program than MSU in its last 20 years. I hope they get things going.

Okay, someone more knowledgeable please help my curiosity out. What are the chances Stanford holds onto this lead with 2 more days of swimming left?

I’d probably wait until tomorrow prelims are done to make any projections. Stanford is swimming faster than their seed times so its looking good for them.

Cal got 18s from all 4 and broke the meet record by a lot.