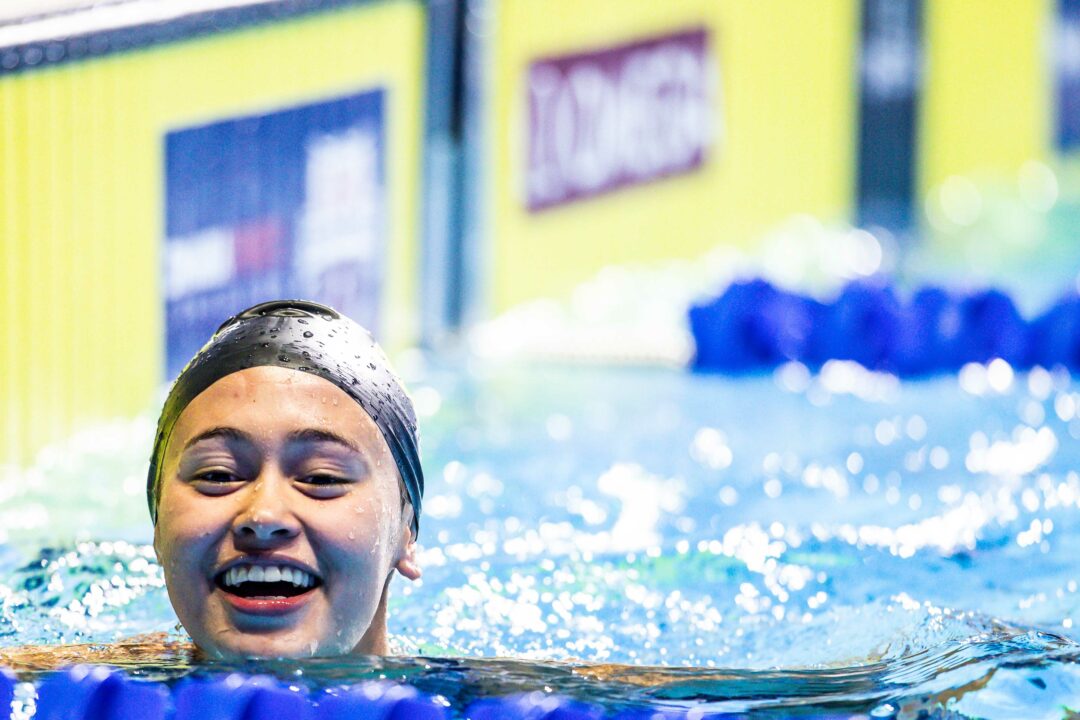 Bella Sims crushed the Winter Juniors Meet Record by almost 5 seconds, and was joined on the podium by teammates Katie Grimes and Claire Weinstein. Archive photo via Jack Spitser/Spitser Photography

The Sandpipers of Nevada flexed their distance muscles on Thursday at the Speedo Winter Junior Championships – West meet in Austin, Texas.

Sandpiper swimmers finished 1-2-3 in the race, with all three swimmers being 16 & unders.

Olympian Bella Sims broke the Meet Record with a 4:32.28 (though it actually missed her personal best by .15 seconds). That crushed the previous record of 4:37.10 that was set by her fellow Tokyo Olympian Regan Smith in 2018.

Besides Sims’ new record, Grimes and Weinstein also launched up the all-time rankings for their ages. Grimes is the fastest-ever 15-year old in the history of the event, and #3 all-time 15-16, behind only Sims (4:32.13) and Olympic champion Katie Ledecky (4:28.71).

Sims swam on the American 800 free relay at the Olympic Games, where she received a silver medal for her efforts in the preliminary heats. Grimes swam the 800 free and placed 4th.

Weinstein joined the team after the summer long course season from the Westchester Aquatic Club in New York. There she trained under Carleanne Fierro in a program that has developed a number of top-level age groupers, including Olympic medalist Kate Douglass, who moved on to other programs as they entered their high school years. Weinstein’s previous best prior to the meet, from December 2020, was 4:44.10.

Grimes with the MASSIVE time drop

you can go leave

Not to those girls

they’re now the 3rd and 4th fastest high schoolers of all time if I’m looking at this database right, and Grimes isn’t even halfway through high school yet

Grimes is the third fastest 15yo behind Ledecky and Sims. Sims was faster in April when she was 15.