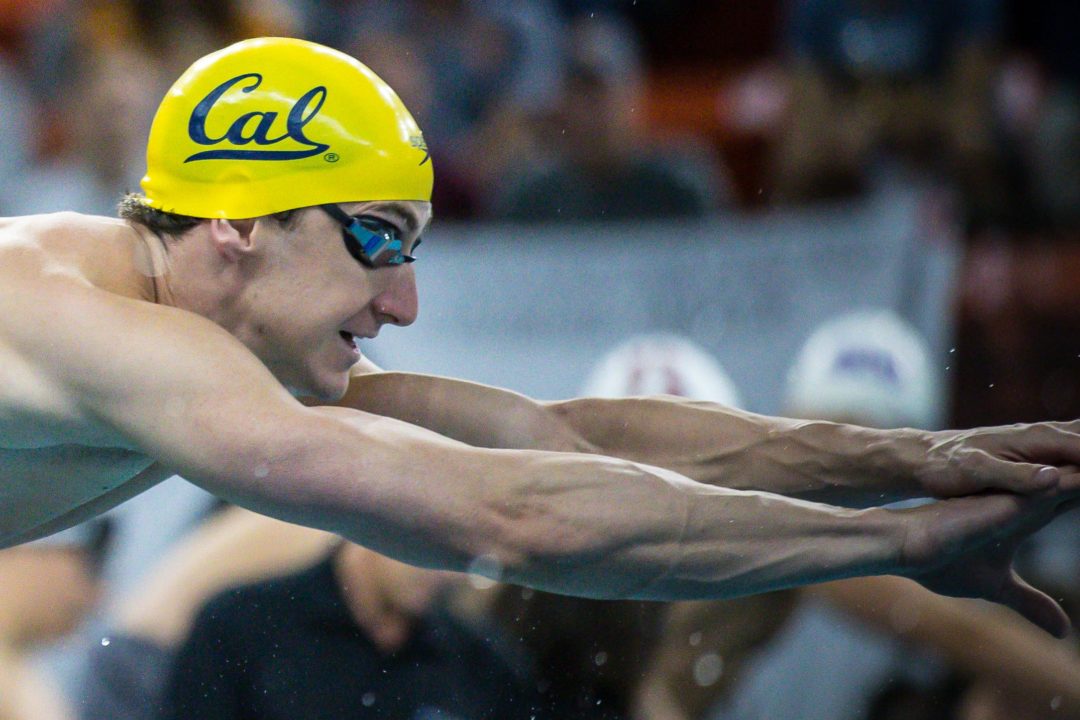 Ryan Hoffer then split a scorching 18.55 on the 2nd leg, with Nate Biondi (19.26) and Bryce Mefford (19.58) bringing the squad home.  Stock photo via Jack Spitser/Spitser Photography

Cal hosted USC for the first day of a two-day men’s dual meet at Spieker Aquatics Complex. Cal heads into tomorrow’s session with a 48-point lead, putting them in excellent position to emerge victorious.

Of today’s events, Cal won both relays and all but one of the individual events. The headline swim came at the end of the session, where Cal’s 200 free relay suited up, and clocked a 1:16.63 to establish an NCAA ‘A’ cut in the event, automatically qualifying them to swim it at NCAAs.

With one Automatic Qualifier in a relay, now they only need consideration cuts in the other relays to race those at NCAAs – which for a program like Cal takes the pressure off.

The Cal men race-suited only their A 200 free relay and were in training suits the rest of the meet; USC reportedly wore racing suits for most (but not all) of the meet.

Friday’s portion of the two-day dual meet featured eight swimming events and two diving competitions. Cal and USC will return to action at noon PT Saturday to complete the remainder of the meet. Cal leads, 98-50, after the first day.

Björn Seeliger, Ryan Hoffer, Nate Biondi and Bryce Mefford capped the day by cruising to a pool-record-setting 1:16.63 finish in the 200 free relay. The NCAA A qualifying relay result stands as the third-fastest time in the country so far this season. Cal opened the meet with another relay victory, as Destin Lasco, Reece Whitley, Hoffer and Seeliger clocked the ninth-fastest 400 medley relay time (3:08.90) in the country this season.

In the diving events down the road at Legends Aquatic Center, sophomore transfer Tyler Wesson was the lone Bear to compete. He placed second in the 3-meter (255.38) and took third on the platform (185.40).

USC opened their 2021 dual-meet season against Cal, Friday (Jan. 29) at the Spieker Aquatics Complex, where Freshman Kaitlyn Dobler posted the first NCAA A-cut of the season during a record breaking performance in the 100y breast.

The Bears and Trojans competed in eight swimming races and two diving competitions Friday and will return to the pool Saturday for nine more races to complete the two-day meet. Action continues tomorrow at 9 AM with the women’s competition, followed by the men’s meet at noon.

Freshman Kaitlyn Dobler, who touched in 58.31 to win the 100y breast, also set a Spieker Aquatics Complex pool record, and secured the first Trojan NCAA A-cut of the season. Dobler’s time is the third fastest in the country this season. Isabelle Odgers was third in 1:00.48 and Maggie Aroesty was fifth in 1:03.45.

Just off the top of my head, I’d say the names I mentioned are likely to score at the potential NCAA meet, if Coach Durden and Coach Reese were to include them on their respective NCAA roster.

What ISL team is signing Hoffer ?
LA current ? Like the rest of Cal

Probably depends on how exactly this ‘draft’ works out.

If swimmers who weren’t in the league last year are forced into the ‘draft,’ he’ll be a high draft pick, I’d have to believe. But…it’s conceivable that “high” still means sliding to LA Current, depending again on who actually goes into the draft (for example – does London get to keep their Aussies? Or do they go into the draft?)

I am thankful for swimming.

Anyone know if people were suited?

Ready for Hoffer to split 17.

Was just about to say I think it’s going to happen. I also think if he hits his taper right, he may individually go under 18.4 and under 41 will have to wait and see.

Man would be great to see him go 40. That 41-low as a HS junior is still one of the most mind-blowing performances in swimming.

Especially since it was practically all underwater.

I’ve watched that swim more times than I’m proud of. My favorite moment is the announcer giggling when he learns that hoffer broke the pool record.

That entire sequence of him announcing Hoffer broke the pool record was fantastic. You hear him go “… what?” Away from the mic as someone presumably tells him the pool records gone, he announces it, giggles, and then you see Hoffer realize too and laugh

Looking over those results… Cal has a depth issue

Care to elaborate? Because it seems like Cal has the polar opposite of a “depth” issue