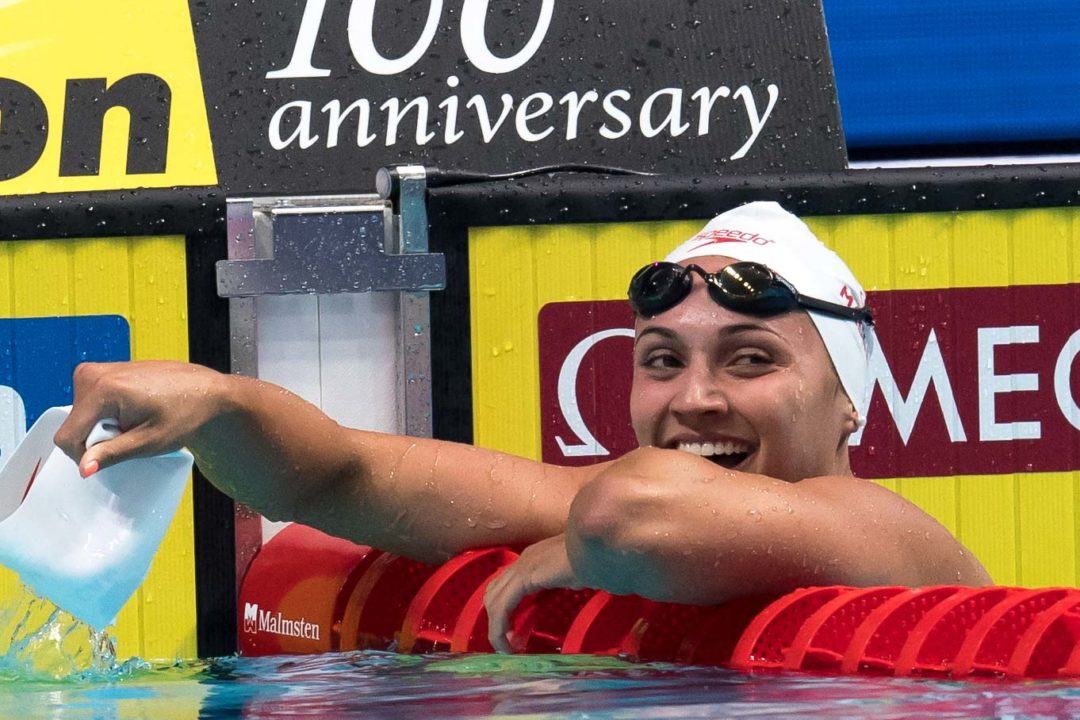 During the second prelims session of day 1, Kylie Masse made a statement with the #4 ranked 100 back in the world this season. Archive photo via Mike Lewis/Ola Vista Photography

In the second of 2 prelims sessions on day 1 of the 2021 Canadian Olympic Trials, Kylie Masse started her meet strong with a 58.13 100 backstroke to claim top seed heading into finals.

Masse’s swim makes her the 4th fastest woman in the world this season behind recent world record-breaker Kaylee McKeown‘s 57.45 at the Australian Olympic Trials, Regan Smith‘s 57.92 at the US Olympic Trials, and Kathleen Dawson‘s 58.08 at the 2021 European Swimming Championships.

Masse will be back to swim in the finals of the event and will have a shot and breaking the second Canadian record of the meet, following Joshua Liendo’s 51.40 100 butterfly during the first prelims session.

As reigning world champion, Masse was pre-selected for the Canadian Olympic team this year, meaning that the biggest race will be for 2nd place. Among those fighting for the second spot on the team will be Kayla Sanchez, Ingrid Wilm, Mary-Sohpie Harvey, and Taylor Ruck. Those 3 women placed 2nd – 5th in the prelims while only Masse, Sanchez, and Wilm were under the FINA A of 1:00.25.

On the men’s side of the event, 2016 Olympian Markus Thormeyer took things out with a 54.18 to take first place in the heats but and was followed by Cole Pratt who swam a 54.41.

Both of them were a little bit slower than their entry times of 53.35 and 53.81, respectively and they were also a bit off the FINA A of 53.85. While Thormeyer is already on the Olympic team for the 200 backstroke, he will need to get under that FINA A in order to secure his spot on the team for the 100

Thormeyer and Pratt will need to hold off the field on men behind them which currently includes 2016 Olympian Javier Acevedo and UBC swimmers Tayden De Pol and Blake Tierney, among others.

Day 1 finals will begin at 5:30 pm EST and will feature the men’s and women’s 100 butterfly and 100 backstroke finals as well as the timed finals of the women’s 400 freestyle.

Neg split 100 by Pratt. I imagine he has another gear!

And he looked almost loafing, very relaxed on the first 50

That looked like a very smooth swim for Kylie. Must be a great confidence boost for her to get a big swim under her belt.

I’m also wondering what’s up with Ruck. One thing I’ve noticed is that she hasn’t put on the muscle that Masse, Oleksiak, Sanchez have over the past few years. I don’t know if that means anything but she just doesn’t seem to have as much power as some of her training peers.

Taylor Ruck did not look good at all this morning. Hoping she has another gear tonight. Canada needs her to be pre-Stanford to have a shot of beating America in the relays

Impossible to see McKeown off the podium right now, but Masse, Smith and Dawson looks like a total dogfight. Love to see a sub 58 from Kylie tonight.

Can someone find usage over time for “dogfight”? Must be up big time after this week

Hasn’t Thormeyer been nominated for the team in the 200 Back, not the 100?

I think so, but that negative split by Cole Pratt should make for an interesting finals swim