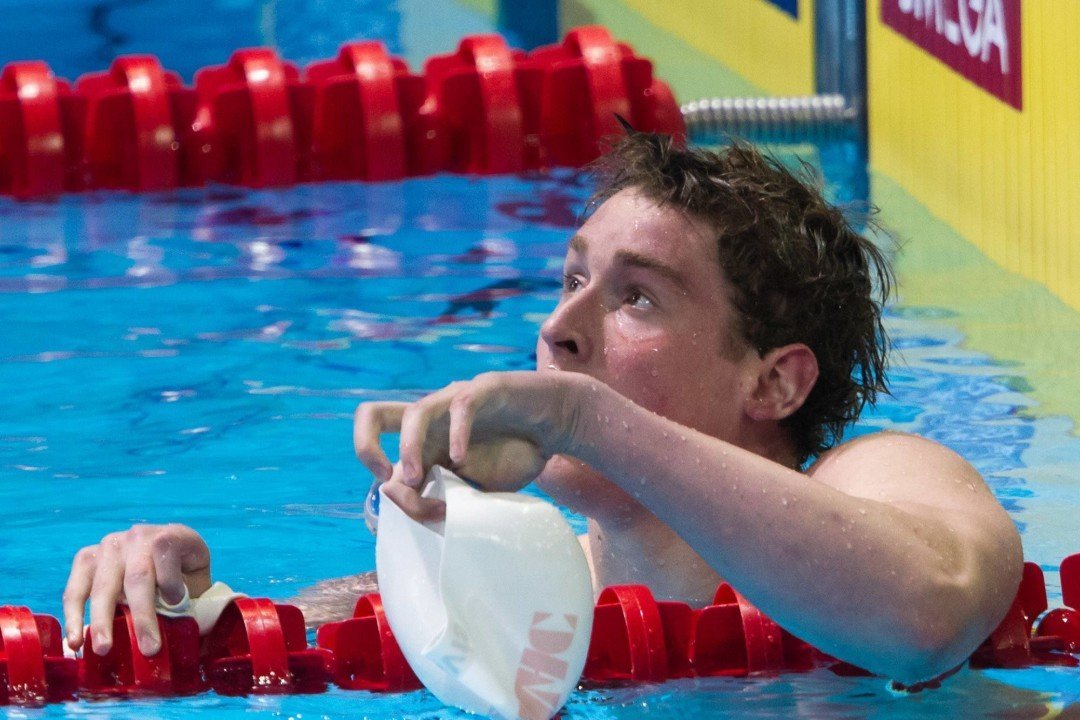 Maclin Davis, after back surgery in January, was back in the pool for the USC Trojans on Friday. Archive photo via Tim Binning/TheSwimPictures.com

The USC Trojan men opened their inter-collegiate season on Friday afternoon on the road with a 159-103 victory over the UC-Santa Barbara Gauchos.

The meet’s final score was unimpacted by exhibitions, and USC won the meet by a slightly-larger margin than last season.

The victorious Trojans were led by two individual victories from U.S. National Teamer Reed Malone. He first won the 200 free in 1:39.49, beating-out his teammate Michael Domagala (1:40.02). The Trojans are without another one of their monster 200 freestylers Dylan Carter this season (he’s sitting out to prepare for the Olympics), they still have those two back from the defending NCAA Champion 800 free relay. Malone was half-a-second better, and Domagala was over a second better, than they were against UCSB last season early in their schedule.

The Trojans swam mostly primary events at this meet, and Malone won again in the 500 free with a 4:30.96.

This meet also represented the return of Maclin Davis, who missed the second semester of last season after having back surgery in January. Davis had the fastest butterfly split on the medley relays for the day (21.93), placed 3rd in the 50 free (21.73), and finally won his primary event, the 100 fly in 50.62. UCSB’s Chris Nolan placed 2nd in that race just behind in 50.65 with the fastest second-50 in the field.

UCSB did win three events at the meet, and exposed a few areas where USC might struggle with depth this season.

In the 100 free, Clayton Young swam 46.38 to beat out USC freshman Kyle Grissom (46.57). The Trojans are the defending NCAA Champions in the 400 free relay, but none of the 4 swimmers on that relay participated in Friday’s meet. Cristian Quintero graduated, Santo Condorelli is red-shirting and likely transferring, Dylan Carter is redshirting, and we have no information as to why Estonian Ralf Tribuntsov wasn’t at this meet.

The Trojans have similar losses in the backstrokes – especially without Tribuntsov (who was a 44.9 at Pac-12’s last year). They graduated their two best 200 backstrokers from last season, which left a hole for the Gauchos’ Billy Mullis in 1:52.55

UCSB’s Chris Nolan won the 200 fly in 1:50.74; that won’t be as much concern for the Trojans, given that they’re still strong in the 100 fly, and Domagala is a good 200 butterflier but the coaches had him in other events in this meet.

Braden, what do you mean “Santo Conorelli is red-shirting, and likely transferring”

Where’s he going to go to school now?

Bob – right now he’s taking the year off from the NCAA and training at Canyons with Coley Stickels. I don’t believe he’s made a decision on where he’s going after the Olympics, but most people I’ve spoken to don’t believe he’ll be back at USC.

Oh ok, that makes sense. Thanks for answering Braden! Honestly, I think Santo should stay with Coley Stickels. In barely a year, he went from being 48.83-47.98

I knew Vissering was delaying his eligibility, whatever happened to their other big recruit Mulcare? Did I miss something?

It seems like Salo always over spends and than someone sits out first semester to balance the scholarship books!