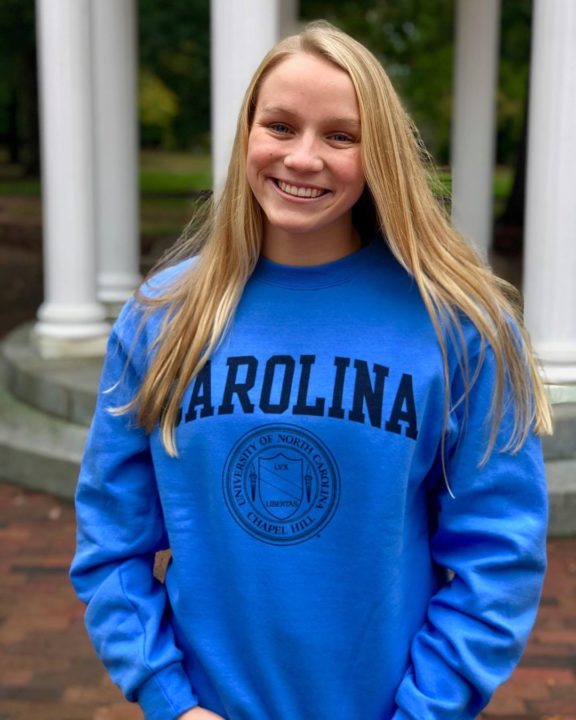 Elizabeth Sowards was the 2019 North Carolina 4A State Championship runner-up in both the 50 and 100 yard freestyles for Hough High School.

Sowards began her high school career at Dunlap High School in Illinois, where in 2017 as a freshman she finished 5th in the 50 free at the Illinois High School State Championship meet.

By her sophomore season, she had moved and joined the team at North Carolina powerhouse Hough High School. The steady improvements she was already showing with the Peoria Area Water Wizards in Illinois have continued since the move, but the biggest surge forward over the last year is in the 100 fly. At the Winter Junior East Championships in December, she swa a 53.96, which was a best time for her by over a second-and-a-half. That time ranks her as the 20th-fastest 15-16 in the country so far this season.

Sowards finished 2nd in both the 100 free and 50 free at her first North Carolina 4A High School State Championship meet (big schools). That coincided with a 2nd-place team finish for Hough High School.

She’ll join a North Carolina team that under first year head coach Mark Gangloff has seen a rapid turnaround of fortune already. That’s especially true in the sprint group, where, for example, junior Emma Cole has gone lifetime bests in the 50 free, 100 free, 200 free, and 100 fly already this season. In the three freestyle races, she didn’t go a single best time in her first 2 years in college.

She joins a UNC class of 2021 that includes Alexandra Rudolph, Greer Pattison, Grace Kayal, Katharine Ward, Katie Wright, Kylie Yoder, Olivia Nel, and Victoria Ireland so far. Pattison (22.9/50.1) and Nel (25.3/56.8 LCM) are the most comparable sprint freestylers in the group.

Heels Rising!!!! Folks are starting to see what Gangloff is doing in Chapel Hill!!!