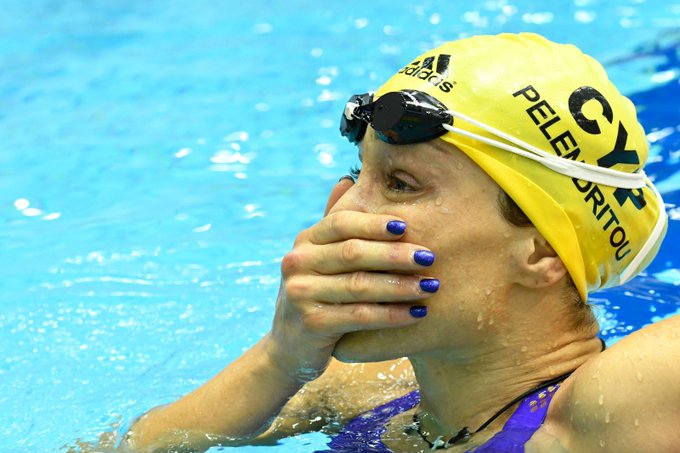 CYP's Pelendritou and CHN's Guizhi became the first S11 females to break 30 seconds in the 50 free during the third prelims session of the Tokyo Paralympics. Stock photo via alf Kuckkuck on Twitter

History was made during the third prelims session of the Tokyo 2020 Paralympics, featuring two World records and four Paralympic records biting the dust.

For the first time, the 30-second barrier was cleared in the S11 women’s 50 free, which features athletes with the most severe visual impairments including blindness. In heat one, China’s Ma Jia first broke the 30.20 World record and 30.73 Paralympic record with a time of 30.05. In the second heat, Cyprus’ Karolina Pelendritou & China’s Li Guizhi finished three one-hundredths apart from one another at the finish to clear Jia’s World/Paralympic records, 29.92 to 29.95. Guizhi’s time was also good enough to set a new Asian record.

In the S5 men’s 50 fly, China’s Yuan Weiyi chopped more than a second-and-a-half off the 2012 Paralympic record of 34.15 to clock the top seed into the final at 32.30. The former record-holder, 26-time Paralympic medalist Brazil’s Daniel Dias, qualified 7th into the final at 37.27. Dias has earned two bronze medals so far at these Games.

Out of the S5 women’s 50 fly, China’s Lu Dong took the top prelims seed with a new Asian record time of 40.74. Taking the No. 2 seed in this preliminary event was S4 swimmer Marta Fernandez Infante, who set a new World/Paralympic record in her category with a time of 41.27. Placing sixth en route a new Americas record was Joana da Silva Neves Euzebio, touching the wall at 46.32. Another S4 swimmer, Malaysia’s Brenda Anellia Larry, set a new Asian record at 1:00.62.

Do we know what happened with the final? Apparently the result was protested and it was upheld?

Apparantly Guizhi hit and hindered Bruinsma several times during the race while going over the laneline with her arms, causing Bruinsma to steer away and hit the laneline herself. I didn’t see the race, but this was in a Dutch news article.

Seeing how this is the class for swimmers with visual impairments I guess this can just happen, but it caused unfair hinder so the race is to be done over.

Why was the result protested and by whom?

Apparently (based on Dutch media outlets), the Dutch swimmer Bruinsma protested bc of hinder from Li Guizhi, who crossed the line with her arm three times and caused Bruinsma changed her direction within the lane and hit her own lane with her arm. (I haven’t seen video evidence so can’t confirm). Given S11 is a category for visually impaired swimmers, I guess this can happen, which is why such protest is an option. Based on the review it seems that the complaint was wdeemed warranted, which is why they’ll do the reswim