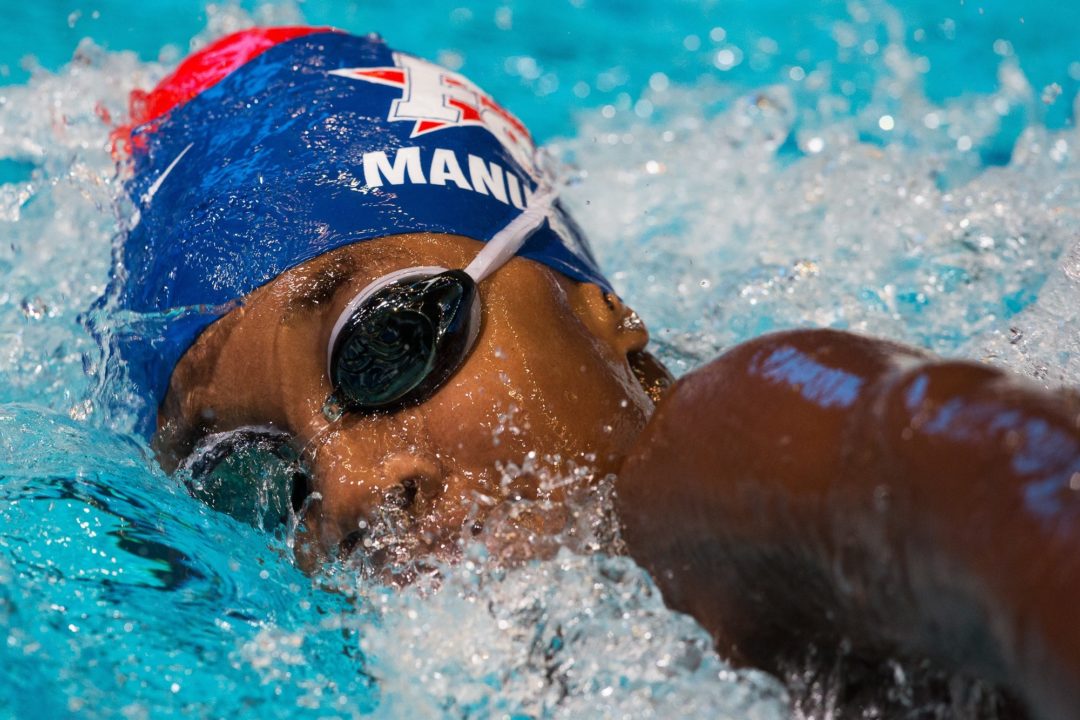 First Colony's Simone Manuel is the runaway top seed in the 100 free. Meanwhile Sam McHugh and Michael Andrew nabbed a pair of high seeds and will meet in the 200 fly. Archive photo via Tim Binning/TheSwimPictures.com

Simone Manuel put up a blazing 100 free while Sam McHugh and Michael Andrew nabbed a pair of high seeds each on prelims of day 2 at the NCSA Junior Nationals in Orlando.

Dynamo’s Kylie Stewart will come into tonight as the top seed in the 200 backstroke. She cruised to a 1:54.72 to nab an inside lane for the final. That’s still four seconds off her best, but after she went a lifetime-best in the 1000 last night, expect her to be much faster at night. 14-year-old Emily Meilus out of Nation’s Capital is the second seed at 1:55.44, her lifetime-best by over two seconds. She’s followed by a pair of her NCAP teammates, Carrie Boone and Kristina Li.

For the boys, Palm Harbor YMCA’s Tristan Sanders is the top qualifiers. The 18-year-old went 1:44.19. Behind him, the field is pretty tight. Baylor Swim Club’s Robert (Sam) McHugh went 1:44.70, Dynamo 15-year-old Michael Taylor dropped four seconds to go 1:44.76 and Brennan Balogh of Lincoln Select had a nice drop of his own to go 1:44.83 for fourth. McHugh, a Tennessee Vols signee, was still a bit off his lifetime-best, as was top-seed Sanders, so those two are probably the favorites going into tonight.

Simone Manuel is the runaway top seed in the 100 free. She got after it this morning, putting up the fastest swim of her career by .06 with a 47.67. With that, the First Colony senior leads a tough field easily. Some other big names in the final include All-Star Aquatics’ Caroline McTaggart (49.36), Manuel’s future Stanford teammate Janet Hu (49.42), Wisconsin high schoolers Kristin Malone (49.47) and Abby Jagdfeld (49.57) and Florida state champ Megan Moroney (49.66).

The men, on the other hand, swim a 500 today instead of the 100. In that more distance-oriented race, last night’s 1000 free champ Francis Haas leads the way in 4:19.54. That’s still a ways off a lifetime-best for the NOVA of Virginia product, so be ready for more tonight. Michigan high school state champ Nicholas Arakelian is the second seed with a 4:24.26. Rockville Montgomery’s Brennan Novak sits third in a lifetime-best 4:24.71. He was also third in the 1000 last night.

A pair of 16 year-olds are set up to duel for the girls’ 100 breast title tonight. Olivia Anderson of the Aquajets of Minnesota went 1:01.75 for the top seed. Meanwhile Riley Scott of the Marin Pirates is just behind at 1:01.87. Wisconsin’s Sam Senczyszyn leads a large group in the 1:02-lows who all have a real shot to move up and contend tonight.

Some big names head the boys 100 breast. Clovis Swim Club’s Connor Hoppe dropped a half-second off his career-best to take the top seed in 53.75. The 6’5″ Cal signee will need to keep that speed up tonight, as the two boys behind him will almost certainly be faster at finals. Former national high school record-holder Carsten Vissering is just a tenth back in 53.85, while 13-14 NAG record-holder Michael Andrew is third in 54.34. Also in the hunt is Team Suffolk’s Ben Cono, who went a career-best 54.38 for the 4-seed.

Coming off that 100 breast, Michael Andrew went right into the 200 fly, grabbing the top seed and just missing his National Age Group record by a tenth or so. The Indie Swimming 14-year-old went 1:46.48; behind him is Baylor’s Sam McHugh in 1:47.06. That looks like another easy prelims swim for McHugh, who holds a 1:43.64 lifetime-best, so Andrew will likely have a rabbit to chase at finals in trying to improve his NAG record in one of his last few competitions as a 14-year-old.

I assume Seliskar is just to the meet later in an attempt to miss less school, but it is too bad we couldn’t see him in that 100 breast.

I think he will only swim on friday/saturday.

Sub 47 for Miss Manuel tonight?
I’m probably too optimistic but with such a talent, why not?

And happy to see that Emily Meilus has destroyed her PB in the 200 back prelims. After her great 1000 free yesterday I predicted a big week for her on backstroke.

Sub 1.50 for Kylie Stewart in the same race?

HOPEFULLY WE’LL HAVE A GOOD LIVE WEBCAST WITH GOOD ANGLE CAMERAS AND A GOOD QUALITY OF PICTURES.

as great as meet mobile is… does anyone else find it annoying that they don’t just have live results on a website? Its a lot easier to look and compare on a web page than it is in meet mobile.

Was going to say the exact same thing…meet mobile is great and all, but it seems like it should be a complement to good ol web live results, the trend towards meet mobile only is kind of lame

Totally agree with you.

Exactly! For a couple months I lost my phone and had no access to most results because they were all on meet mobile!