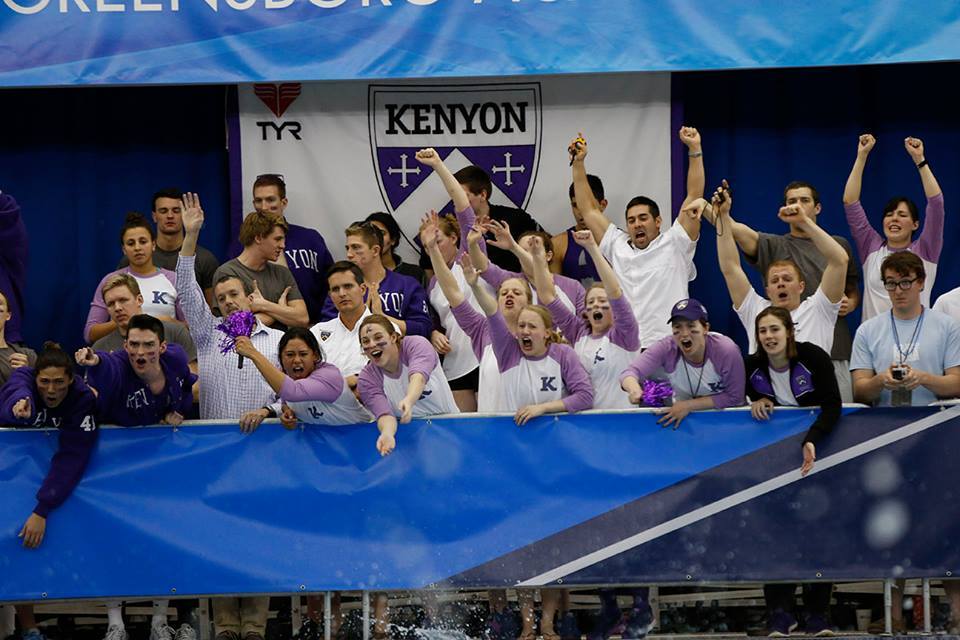 Romania’s David Popovici impressed in yet another swim, this time firing off a monster personal best of 1:46.15 in the 200m freestyle.

Kenyon swept in a Ohio D3 double dual, cruising to victories against Ohio Northern and Ohio Wesleyan in both the men’s and women’s meets.

Ben Baturka went on to win the 50 free in a time of 21.36, touching just off his season best of 20.98. Crile Hart won the women’s 50 free, posting a 23.92, marking the only swimmer in the field to go under 24 seconds. That time marks Hart’s fastest of the season, which also ranks 26th in the Division 3 rankings.

Kenyon also swept the men’s and women’s 200 free relays. The women’s relay of Emmerson Mirus, Caylee Hamilton, Crile Hart, and Peyton Ritsau combined to post a 1:38.11, which sits a ways off their best time this season – 1:32.82, which is 3rd in the D3 rankings. In the men’s relay, Tommy Weiss, Connor Rumpit, Ben Baturka, and Aidan Ohning combined to go 1:27.50, finishing just a second ahead of Ohio Northern, who went 1:28.47.

GAMBIER, Ohio – Moments before Friday evening’s home dual meets with Ohio Wesleyan and Ohio Northern universities, the Kenyon College Ladies swimming and diving team honored members of its senior class. Following the celebration, the Ladies jumped in the water, got to work and logged a clean sweep, defeating Ohio Wesleyan, 145-79, and Ohio Northern, 195-46.

Sophia Kuvan, one of the eight seniors on the Kenyon team, set the tone. She opened the meet by swimming the breaststroke leg on the Ladies’ winning 200-yard medley relay team. She joined Caitlin Foley, Hannah Orbach-Mandel and Marysol Arce to post the race’s top time of 1:49.69. Seven events later, Kuvan chalked up an individual win, taking the 100-yard freestyle in 53.35.

Kanchi Desai, another senior, logged two more event wins for the Ladies. She first won the 1,000-yard freestyle in 10:29.95 and then claimed victory on the 100-yard backstroke by completing the race in 1:01.43.

Kenyon had a couple more two-time event winners. Freshmen Crile Hart and Caylee Hamiltonboth swam a leg on the Ladies’ winning 200-yard freestyle relay team. They paired with fellow freshmen Emmerson Mirus and Peyton Ristau to clock in at 1:38.11. On their own, Hart was fastest in the 50-yard freestyle (23.92) and Hamilton was victorious in the 200-yard freestyle (1:57.53).

The two wins puts Kenyon’s dual meet record at 4-2. The Ladies will compete in their final dual meet of the season tomorrow at the University of Cincinnati. That meet is scheduled for a 1 p.m. start.

GAMBIER, Ohio – The Kenyon Lords swimming and diving team had no trouble against Ohio Wesleyan University and Ohio Northern University on Friday night at James A. Steen Aquatics Center.  Kenyon rolled to a 153-79 win against the Battling Bishops and defeated the Polar Bears 179-64.

Right from the get-go, Ben Baturka and Tommy Weiss teamed up with Kieran Allsop and Reilly Shields in 200-yard medley relay and claimed first with a time of 1:33.16. Kenyon’s ‘A’ team of Alex Swaim, Matthew Cooper, Matt Leenhouts and Doni Moffa followed in second.

A couple of events later, Baturka notched another Kenyon win in the 50 free. He touched the wall in 21.36 while Weston Carpenter was right behind him (21.64).

Eammon Keenan later won the 200 individual medley while Cooper dialed up a first-place mark in the 100 butterfly. Rounding out Kenyon’s wins were Leenhouts’ 46.89 time in the 100 free and Swaim’s 52.08 mark in the 100 backstroke.

In diving competition, Ryder Sammons won both the 1-meter and 3-meter boards with 284.70 and 275.05 points, respectively.

In the evening’s final event, Baturka, Weiss, Connor Rumpit and Aidan Ohning added another victory for the Lords during the 200 freestyle relay. The group was able to complete that event in 1:27.50

Next on the calendar for Kenyon is a trip to the University of Cincinnati tomorrow at 1 p.m.

Ohio Wesleyan and Ohio Northern finished in a tie, each with 117 points, while Kenyon defeated the Bishops by a 153-79 score.

Against Ohio Northern, Mansfield won the 50 and 100 freestyle events in respective times of :24.20 and :53.61.  She also teamed with senior Grace Bulchik (Lakewood), junior Alicia Margello (Powell/Bishop Watterson), and freshman Emily Fulmer (Bellefontaine) to win the 200 freestyle relay in 1:43.29.

Also winning events for Ohio Wesleyan were Margello, who touched first in the 100 breaststroke in 1:09.37 and added a third-place finish in the 50 freestyle; and sophomore Qiukui Moutvic (Upper Arlington/Metro Early College), who won the 1-meter diving competition with a score of 176.80 points.

Against Kenyon, Mansfield placed second in the 50 and 100 freestyle events.

Kenyon defeated the Bishops by a score of 145-79, while Ohio Northern was a 157-84 winner over Ohio Wesleyan.

Junior Ben Whitbourn (Norwich, U.K./Wymondham College) also won an event, taking the 100 freestyle in :48.43 and adding a second-place finish in the 50 freestyle.

ADA — The Ohio Northern men’s swimming and diving team defeated Ohio Wesleyan 157-84 and fell at No. 3-ranked Kenyon 179-64 on Friday night at the Steen Aquatic Center.

The Polar Bears move to 7-1 overall and clinch their 11th consecutive winning dual meet season. The Lords improve to 2-3 and the Battling Bishops fall to 5-4.

Senior Braden Kuhn (Tiffin/Columbian) won the 3-meter diving in an NCAA Regional qualfying score of 279.60 points to lead Ohio Northern. He also finised second in he 1-meter diving with 252.80 points.

Northern wrapped up the meet with junior Pete He (Mason), Golba, Chapman and senior Ian Simpson (Strongsville) finishing second in the 200 free relay in 1:28.47.

The Polar Bears will wrap up their regular season with a dual meet against No. 23-ranked Case Western Reserve at Hillsdale, Mich., on Saturday.

ADA — The Ohio Northern women’s swimming and diving team tied Ohio Wesleyan 117-117 and fell at No. 2-ranked Kenyon 195-46 on Friday night at the Steen Aquatic Center.

The Polar Bears move to 5-2-1 overall and clinch a winning dual meet season. The Lords improve to 3-3 and the Battling Bishops move to 4-3-1.

Sophomore Libby Sartschev (Parma/Normandy) was second in the 3-meter diving with 163.70 points for six dives and sophomore Lauren Halle (Chandler, Ariz./Hamilton) won the 200 I.M. in 2:17.08

The Polar Bears will wrap up their regular season with a double dual meet at NCAA Division II foe Hillsdale (Mich.) with No. 20-ranked Case Western Reserve at 1 p.m. on Saturday.