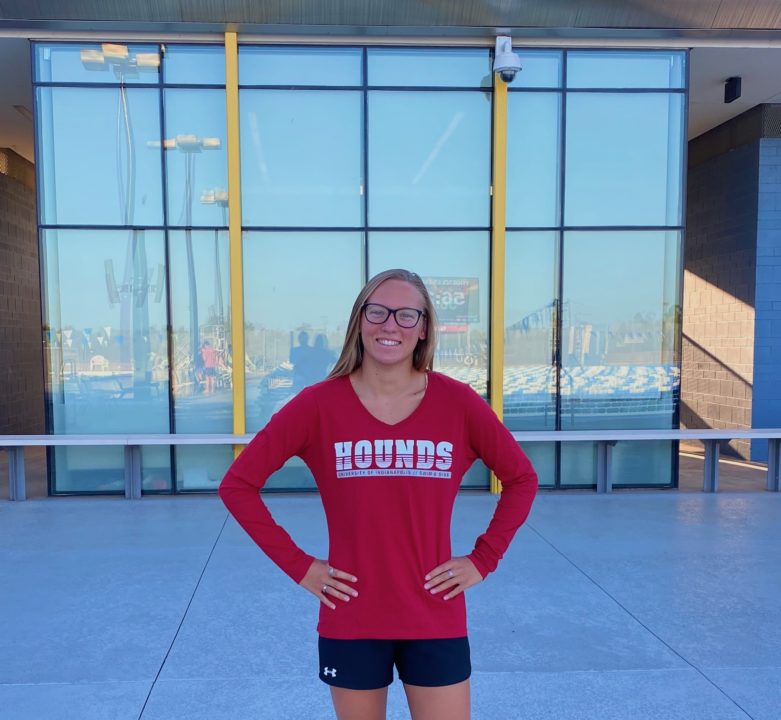 McCoy would've won the 200 IM at the 2020 NCAA D2 Champs and placed third in the 400 IM, and she has two years of eligibility remaining. Current photo via Katie McCoy

Arizona native Katie McCoy has announced her transfer to the University of Indianapolis after two seasons at Boise State University, following the shuttering of Boise State’s swimming & diving program. She’ll have two years of eligibility left with UIndy.

The Boise State team was fantastic, and I loved my time there. The decision of the Boise State Athletic Department to cut the team came as a shock to everyone. However, I’m excited to announce my decision to transfer to the University of Indianapolis. I’m grateful both for the friends I have at Boise State and the ones I have in front of me at UIndy.

At Boise State, McCoy made huge improvements in IM and progressed in backstroke, too. She scored in all three of her individual events at the Mountain West Conference Championships in 2019 and 2020; this past season, as a sophomore, she made it to A-finals for the first time, touching fifth in the 200 IM and eighth in the 200 back. She also won the 400 IM B-final in February.

McCoy comes in with the speed to win individual conference crowns in both IMs and the 200 back, and she’s fast enough to be a major contributor at the D2 national level. The UIndy women are a national powerhouse in Division II; they were in fourth place following two days of the 2020 NCAA D2 Champs before the meet was called off due to the coronavirus pandemic. McCoy would’ve won the 200 IM at that meet and placed third in the 400 IM at that meet, so this is a major snag for the Greyhounds.

Congrats, Katie, on finding a new home. Hope to see you along the way!

Congrats! Wishing her the best in the last few years of her NCAA career.