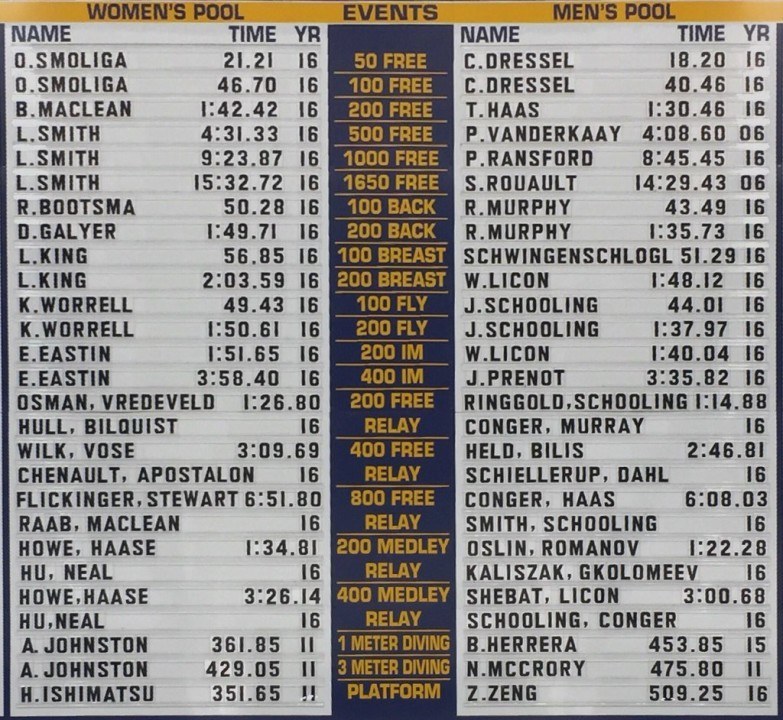 The Herbert McAuley Aquatic Center, originally the 1996 Olympic Pool, has seen a lot of history. Before these last two...

The Herbert McAuley Aquatic Center, originally the 1996 Olympic Pool, has seen a lot of history. Before these last two weekends, the pool had a record board with many names for the ages. Few of those historic names remain after two weeks of racing action. In fact, according to Georgia Tech swimming’s own official twitter, only two swims remain from before NCAAs.

First lets take a look at the board as it stood before all the action:

Now here is the record board after:

The only two swims to survive the past weekend came from Peter Vanderkaay and Sebastien Rouault. Both were men’s distance freestyle events, the 500 free and the 1650 from the 2006 NCAA Championship also hosted at Georgia Tech.

Swept from the board, among others, were names like Ryan Lochte (200/400 IM and 100/200 back) and Natalie Coughlin (50/100 free). Their replacements, Olivia Smoliga, Will Licon, Josh Prenot and Ryan Murphy, still have a lot to prove.

Many of these records look safe in the near future. With the ACC Championship becoming a near fixture in Greensboro, the pool will likely have to wait for another NCAA Championship for anyone to challenge the swims of these past two weekends. Still, after two decades the McAuley Aquatics center remains one of the fastest in American swimming.

Best record that was up there? The Phelps, PVK, Tarwater, DeJong 800 free relay record. They swam a 6:12 untapered. Mind-blowing swims from some fast guys.

Even more impressive was that, at the time, that relay set the American and US Open records by 5.49 and 1.71 seconds respectively.

Poor guy that had this task…he literally had to go buy a vowel “schingenschlogl” ,ha!

Amazing meet, maybe one of the best ever!

Good thing Fabian Schwingenschlogl didn’t win to break the 200 breast record. No way his time and name would fit on the board. I would definitely forgo the year to try to make it all fit though.

I commented this once before, but now with this visual I think it again…imagine being a Georgia Tech swimmer and looking up at these pool records every day. Not like the good old days at the local YMCA anymore. Wow.

This is awesome. I thought about this when the ladies’ board was shown post-meet. The only one I thought would make it through the weekend was the 200 free.

Maybe when Rowdy screamed Ransford’s name at the mile’s end, he was just a few minutes late noticing the pool record.