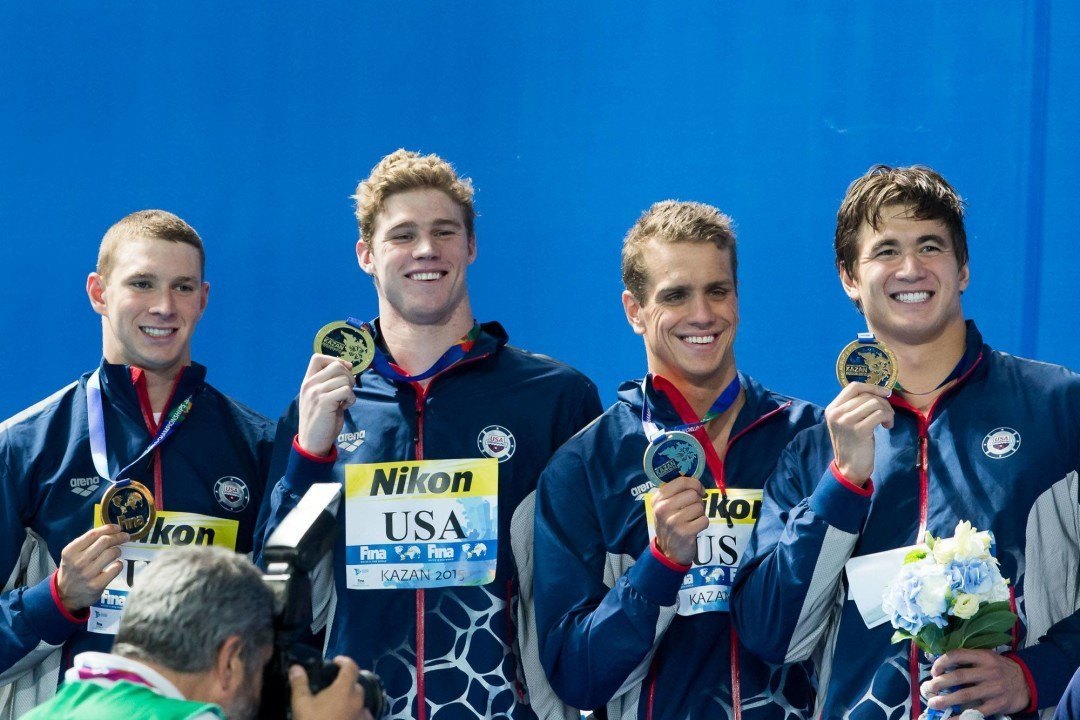 Which relay teams would rock the lanes in Rio if qualification ended today? Archive photo via Tim Binning/TheSwimPictures.com

The men’s and women’s relays at the 2016 Olympic Games will be one of the most competitive we’ve seen in recent history. As evidenced at the FINA World Championships last year, smaller nations are gaining depth and stepping up big time, while the usual powerhouses of USA and Australia aren’t as clear of favorites as they may have been in years past.

In Kazan, we saw Great Britain’s 4x200m freestyle relay take the gold in the men’s race and secure another win, along with a World Record, in the non-Olympic mixed 4x100m medley relay.  Meanwhile, the men of both the United States and Australia failed to even final in the 4x100m freestyle race.

Yes, we’re entering ‘Trials Season’ with the athletes Japan, Great Britain, Australia and Canada among others all gearing up to throw down qualifying times at their country’s respective Trials meets. Most likely we haven’t seen the fastest combinations of athletes that will enter the pool sequentially once gold medals are on the line in Brazil. But, what if the Olympics were tomorrow? Let’s take a look at the countries which would be on the Rio roster qualification list for the men’s relays if the cut-off stood at today.

First, as a refresher, here are the FINA qualification rules concerning relays:

One final note: even when we see the list of top 16 teams as of May 31st, there are no guarantees we won’t see a last-minute scratch in Rio. It has happened, as Japan, for instance, scratched the men’s 400 freestyle relay prior to the start of the 2012 London Games.

With the first 12 teams being set from Kazan, the only real shake-up in terms of who would ultimately qualify will potentially occur within the bottom 4 teams. Notice USA barely made it to the top 12, sitting just .33 of a second ahead of Australia, who needs to maintain at least a 16th-best time in the world as of May 31st to qualify.

However, with sprinter James Magnussen back in competition, having had to sit out Kazan due to shoulder surgery, and young gun Kyle Chalmers proving he’s the real deal, the Aussies should be more than safe to land a spot to contend for a lane in Rio finals.

The United States earned the runner-up spot by just .42 of a second in Kazan, but it was enough to establish Great Britain as a true gold medal contender come the Rio Olympic Games. The only question is if GBR can replicate their outstanding performance, highlighted by World Champion James Guy‘s insanely-fast anchor split of 1:44.74.

Also, with Australia less than a second away from USA, the stars and stripes will need their best line-up primed and ready to take the lane in Rio. The foursome in Kazan was a kind of mixed bag, not entirely representative of who would most likely make the final 4 or even 6 in the men’s 200m freestyle at U.S. Olympic Trials, the method by which U.S. relay slots are earned.

Ryan Lochte and Conor Dwyer look good to finish top 6 in the individual 200 to win a relay spot, but look to the young stars of Maxime Rooney and Townley Haas to make their mark at Trials and possibly add their names to the 800m freestyle relay roster.

Additionally, GBR’s sprinter Ben Proud has been on a tear as of late, clocking a personal best 100m freestyle (48.52) and scoring a new GBR National Record in the 50m freestyle (21.73) already in 2016, so his anchor could be just the push the squad would need to get them over the edge and possibly on the podium in Rio.Although still a stellar time, Great Britain’s effort isn’t reflective of its fastest possible scenario, as World Record Holder Adam Peaty was absent from the relay squad in Kazan. GBR teammate Ross Murdoch threw down a very respectable split of 59.20, but seeing how Peaty owns the individual 100m breaststroke world record at 57.92, he’s almost guaranteed to drop that leg by at least a second, edging GBR up in the rankings.

http://www.omegatiming.com/File/Download?id=00010F020000042F02FFFFFFFFFFFF02
True that Murdoch swam the heats but Adam Peaty swam the final and split a 57.74. The weak part this year was their fly, James Guy had a great meet but he wasn’t able to replicate Adam Barret’s 50.6 split from 2014. My money would go on team GB this summer though. Ben Proud, as you said, is probably up for a big drop in the 100 free this year and Guy, if on form, should improve his fly split if Barrett doesn’t step up.

Also, Brazil have qualified automatically for the medley relay, not Greece.

Made the * change, thanks!

Petraisfan – Yes, they did. Here’s the report on that final day of NZ trials – http://swimswam.com/new-zealand-olympic-trials-conclude-with-6-swimmers-qualified-for-rio/

The Rio Roll Call will be updated after several more nations’ trials have concluded so we can get an even clearer picture.

Can somebody please answer a couple of questions for me? 1. Is there a max number of swimmers that can be assigned for a freestyle relay? example: If Phelps doesn’t swim the 100 free at US OT and 6 athletes are assigned to the 4×100 (2 swimming the 100 free individually and 4 relay only athletes), as long as all 4 of the relay only athletes swim in the heats, can Phelps swim in the finals? 2. Are all the athletes entered in the individual 100 races (back, breast, fly and free) automatically entered for the 4×100 medley? If so, that means that, no matter how badly they swim in their individual races, the US needs to have all 4… Read more »

I can answer that one. A team can nominate as many swimmers as they wish for their various relay squads; even if they have not qualified for individual swims in that particular stroke. However the “relay only swimmers” (those selected purely for relay duty, not individual swims) MUST be used in either heats or finals for whatever relay they have been nominated. This is not really going to majorly impact the selection strategies of most nations who may have only limited depth to call on/no alternates but is potentially a key issue for the USA and maybe in some cases AUS & 1/2 Euro nations. These nations will look to minimise their relay only selections and where possible will seek… Read more »

Thanks! So it sounds like the only problem would be if a relay only athlete was really in bad form for some reason. If the US takes 4 relay only swimmers for each of its freestyle relays, they better swim well in the prelims or the team might miss making the final, as happened in Kazan.