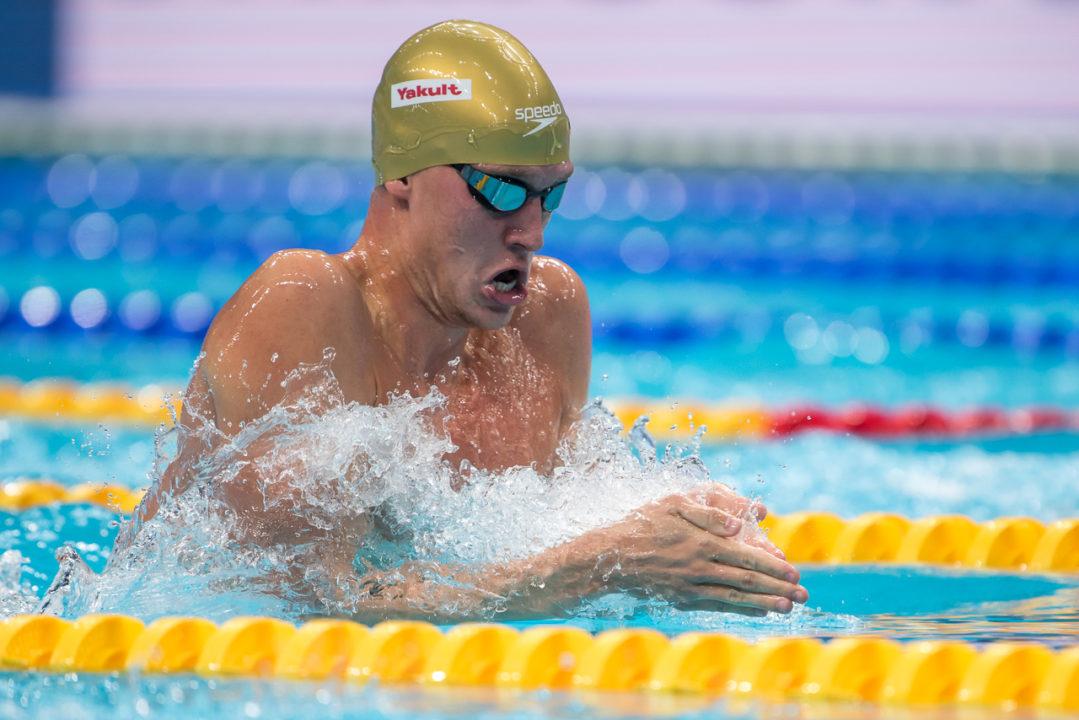 Kazakhstan's first and only ever Olympic swimming champion, Balandin will now turn to coaching the country's national team after calling it a career at 27. Archive photo via Peter Sukenik/www.petersukenik.com

Balandin, who won a historic title for his home nation of Kazakhstan in the men’s 200 breaststroke at the 2016 Olympic Games in Rio, announced the news in a video post on Instagram Wednesday.

Balandin, 27, will now take on a coaching role with Kazakhstan’s national team, having recently met with head coach Ilya Gusakov and the chairman of the Committee for Sports and Physical Culture, Samat Yergaliev.

“Athletes who have conquered the Olympics should continue to contribute to the development of the country’s sports, and not move away from this direction,” Yergaliev said, according to the committee’s press release.

“I think that your desire to become a coach shows how important Kazakhstani sports are to you. For our part, we are ready to support you.”

Balandin is best known for his triumph in Rio, as he claimed the gold medal in the men’s 200 breast out of Lane 8, clocking a time of 2:07.46 to emerge victorious over a tightly-bunched field that saw the top seven finishers all within 54 one-hundredths of one another.

Prior to winning Olympic gold, Balandin made a name for himself at the 2014 Asian Games in Incheon, Korea, sweeping the men’s 50, 100 and 200 breast events. He was also the 2015 World University Games gold medalist in the 100 breast, and won a total of six Asian Games medals and four WUGs medals over the course of his career.

He also represented Kazakhstan at four consecutive LC World Championships from 2013 to 2019, placing seventh in both the 100 and 200 breast in Gwangju.

In his second Olympic appearance last summer in Tokyo, Balandin placed 11th in the men’s 200 breast and 17th in the 100 breast.

Following his Olympic victory, Balandin had a pool named after him at Al-Farabi Kazakh National University in Alma-Ata, Kazakhstan.

The photo above is very strange and quite enjoyable.

I thought he had retired some years back?

What are you talking about? Kazakhstan is an independent country and it’s not part of Russia. The fact that he’s of the same ethnicity doesn’t mean he’s basically Russian. Otherwise Ukrainians are basically Russians too.

Bruh… Being born in Kazakhstan to russian parents and having zero mentions on your social media about the war your ethnic motherland started… well, doesn’t it make you a true russian? 🤡 That’s the exact thing that defines person as a “russian” in 2022 – they are all perfectly okay with what their country is doing (unless it demands you to leave your family and go die for Pooteen somewhere in Kharkiv lol).

I can’t even imagine myself staying silent if MY country starts to invade other independent state, no matter where I am at the moment. Pardon me, but I expect the same from everyone who is somehow related to russia.

P.S. And go read some history books or… Read more »

Wikipedia tells me around 20% of Ukrainian population are of Russian ethnicity. And I know some Ukrainian swimmers such as Govorov lived in Russia in their childhood, does it make them Russians too?
A person who was born and grew up in Kazakhstan is not Russian. Straight and simple.

Also, not everyone is involved in social media. You needn’t post a lot of things on the internet to show your stance and what kind of person you are.

aha so all the russians who protest against the war are not “true russians” by your definition. genius

The man from the land of borat

@Ukranian:
His name is of Russian origin and his ethnicity isn’t certainly kazakh. But can I ask you who are basically all residents of US? Native Americans?
What were the purpose and point of your post?