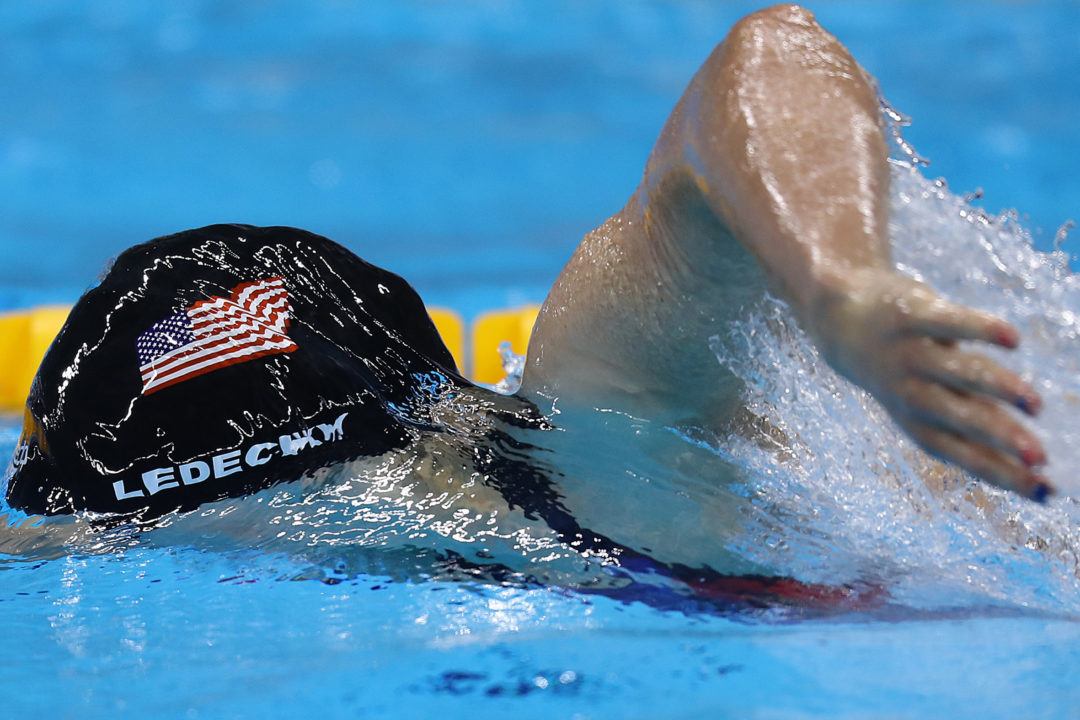 Full results and press releases will be added when they become available.

In the first home dual meet races of her collegiate career, Stanford distance star Katie Ledecky took down multiple pool records at the Avery Aquatic Center. First, she dominated the 200 free with her 1:44.18 to eclipse Simone Manuel‘s previous pool record of 1:44.34.

Manuel may have seen one of her pool records fall today, but she wasted no time getting her name back on the board. The 2016 Olympic 100 free champion threw down a 48.00 to set a new pool record in the yards version of that event. She now owns the Avery Aquatics Center records in the 50 and 100 free.

Both swimmers returned to the pool for the 200 IM, a race in which Eastin currently holds the American Record, but Manuel was certainly up to the challenge. They were neck-and-neck down the final stretch, with less than 2-tenths separating them at the touch. It was Manuel who got there first that time, winning in 1:58.74 to Eastin’s 1:58.93.

STANFORD, Calif. – Stanford earned a 149-99 victory over Washington State on Thursday afternoon in front of an energetic home crowd at Avery Aquatic Center.

The Cardinal (2-0, 2-0 Pac-12) posted the top time in all 14 events and finished 1-2 in nearly every race while showcasing a roster loaded with Olympians, All-Americans and national champions.

Not long after, Ledecky stopped the clock at 4:36.43 in the 500-yard freestyle. In her first home meet, she displaced an eight-year-old record set by two-time Olympian Julia Smit — by more than five seconds. Smit had held the standard at 4:41.74 since 2008. Ledecky’s finish is the second-fastest all-time at Stanford, trailing only distance superstar Janet Evans, who set the school record 26 years ago at 4:34.49.

Stanford, which has won nine straight dual meets and eight in a row at home, began the meet with the top three times in the 200-yard medley relay. Ally Howe, Ella Eastin, Lindsey Engel and Ledecky were first for the Cardinal at 1:42.09.

Following its annual Alumni Meet on Friday afternoon, Stanford returns to action on Nov. 12, hosting Texas at noon at Avery Aquatic Center. There is free admission, and the meet will be live streamed atGoStanford.com.

“The Cougs were solid today,” Cougar Head Coach Tom Jager said. “There was some good and some not so good. We will need to be more consistent throughout this year if we are going to reach our goals. But we have a really focused team and we will be up for the challenge.”

Senior Elise Locke earned a third place finish in the 200 fly touching the wall in 2:02.32. SophomoreJasmine Margetts followed her at 2:05.23.

WSU junior Anna Brolin finished third in the 100 fly touching the wall in 56.63, just three seconds off her career best.

The Cougars are back in the water tomorrow with a dual meet against No. 9 California beginning at 4 p.m.

Ledecky needs to work on her underwater. Janet Hu has a great underwater for her 200 Bk. Every time when she got out of her turn, she improved her lead. However, she needed to work on her turnover rate. Ally Howe had great races too. This year she will do wonder. Stanford still needs someone to swim breaststroke. The graduation of Hasse left a big hole. Right now it seems either Kim Williams or Ella Eastin can fill the hole but that would give up 3-4 seconds on the relays.

I am wondering whatever happened to Heidi Poppe. She has yet to swim this year.

Good idea, Eastin on breaststroke improves that stroke. Eastin missed out on the Olympics because her breast was not as good as Margalis or Catlin L.

Good idea, Eastin on breaststroke improves that stroke. Eastin missed out on the Olympics because her breast was not as good as Margalis or Catlin L.

Poppe recovering from a medical issue. Was on deck yesterday and is awaiting clearance to compete.

Great to hear about Heidi. Hope she is back in full strength soon.

Unreal. Which is the more spectacular team, the Stanford women or the Texas men?

Both are shaped like all-time great women’s & men’s NCAA teams. This Stanford team takes me back to those Florida teams during the Tracy Caulkins era.

Stanford is going to be ridiculous hard to beat at NCAAs, not to mention the amount of Top 20 recruits they have committed for next year. It will be like it was back in the early 90s when Quick had Jenny Thompson, Summer Sanders and Dara Torres training there.

Just a totally shocking result. I was expecting a one or two point meet. I bet Stanford loses a meet in 2023….

Honestly shocked, how did Stanford get the W?

I can’t imagine being on the opposing team and having to swim against Ledecky or Manuel at a dual meet. It would be so distracting and intimidating!

Definitely. If I was the opposing, I would totally be fangirling entire time.

Missy Franklin lapped me during a televised Pac-12 meet once. NBD.

I was next to my idol one time, got lapped in front of 8,000 people and it was televised. But….I went a PR so it was pretty cool.

Crazy fast. When you’re on, you’re on.

Simone Manuel beats Eastin in the 200IM. That girl is full of surprises. I loved her Olympics.

I love her too. She amazed me in Rio. Can’t still believe today she won the 100 free. Great personality. Charming person. Smart. Great role model.

Sprinters are fast in every stroke, not just freestyle.So, I not surprise she was closed to Eastin in the 100 yard breaststroke.

Sprinters are fast in every stroke, not just freestyle.So, I not surprise she was closed to Eastin in the 100 yard breaststroke.