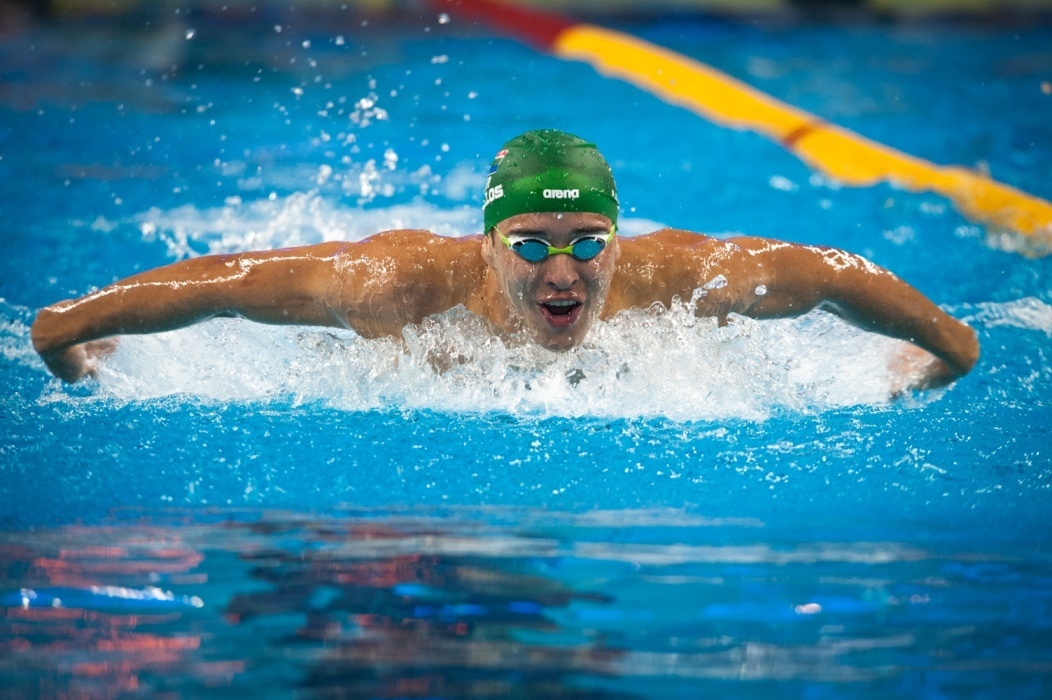 Chad le Clos continues to keep a light schedule in Doha, but in the 100 fly took the top seed over American Tom Shields. Current photo via FINA/Mastbank World Cup - Doha

More than a month out, the 2020 African Swimming Championships have been postponed to a later date, according to an email sent today.

Refresh yourself on the big international swims from February as we take a look at how the men’s world rankings were affected.

Here’s your chance to familiarize yourself with the name of Ethan du Preez, the 16-year-old butterflier from South Africa.

Day two’s prelims of the 2014 FINA World Cup’s first stop in Doha were a bit better than we saw on day 1, emphasized by the World Record done by Hungarian Katinka Hosszu. (Read more about that record here).

That was one of three top seeds that Hosszu took in four morning swims on Thursday. In the women’s 100 free, she swam a 53.05, though with Dutch swimmer Inge Dekker swimming very well, and generally having more speed than Hosszu, that’s probably where the Hungarian will be most vulnerable in finals.

Then, with a relatively relaxed 35-minute break, Hosszu came back again with a 55.38 in the women’s 100 backstroke. That put her three seconds better than anyone else in the field (specifically, 20-year old Ukrainian Daryna Zevina in 58.31), and after winning both the 50 and 200 backstrokes on Wednesday, that seems like a countable $1,500 in the bank for Hosszu as well when she races the final.

Next on Hosszu’s schedule was that 100 IM World Record, and just about 10 minutes later she jumped into the 50 fly prelims, where she qualified 6th, but safely, in 27.45. In finals, the men’s 200 backstroke (which didn’t have enough entries to warrant a preliminary round) will separate those races, meaning she should have at least a couple of extra ticks to catch her breath.

There were a lot of big names taking top seeds on day 2 of this meet. Alia Atkinson ranked 1st in the women’s 50 breaststroke, beating out American Breeja Larson (30.46). Atkinson won that event at half of the World Cup stops in 2013.

Finland’s Jenna Laukkanen, Iceland’s Hilda Luthersdottir, and Americans Laura Sogar finished out the top 5 in that race, and are all tightly-bunched for podium spots.

In the men’s 100 breaststroke preliminary rounds, American Cody Miller was the fastest qualifier with a 58.54. We can guarantee, though, that his leading time won’t be enough to hold off the man behind him: Hungary’s Daniel Gyurta, who was 2nd in 58.86. That’s because on Wednesday, en route to a World Cup Record in the 200 breaststroke, Gyurta swam the first 100 meters in 58.5.

Two South Africans were entered in that race, but both missed the final. That includes 50 breaststroke winner Roland Schoeman, who was out very fast but faded to 59.96; and fellow 50 meter specialist Giulio Zorzi (1:00.91).

Their countrymate Chad le Clos continues to keep his schedule pretty light in beginning here in Doha. He skipped both the 200 free and 200 IM, two events that he’s capable of winning, to focus on the 100 fly. In that 100 fly, he swam a 51.85, which took the top seed ahead of American Tom Shields (winner of the 200 fly on Wednesday).

Ko Fukaya from Japan (52.42), Nikolay Skvortsov of Russia (52.50), and Steffen Deibler of Germany (53.05) filled out the top 5. Poland’s Konrad Czerniak, who won the European Championship in this event in long course last week, snuck into the final as the 8th qualifier in 53.13.  While that cuts it close by placing, based on time in this two-heat prelims session, he was never really in much danger (had a full second cushion).

Marieke D’Cruz (Guehrer) took the top seed in the women’s 50 fly pretty handily in 25.89. She’s a former World Record holder in this event, and sits ahead of Inge Dekker (26.57). That’s two second-seeds for Dekker, who will be lurking for some gold in finals.

Also clearing two minutes and making the final was breaststroker Marco Koch (1:58.74), though in prelims he didn’t really make a big move in his specialty stroke. Australian Thomas Fraser-Holmes was the 4th qualifier in 1:58.77, and American Cody Miller was 5th in 1:59.04.

That 100 backstroke from Hosszu is insane! 55.38 was less than two tenths from the world record…! Of all of her swims so far, I think that one is the most impressive.

Agreed. Her versatility pulls her in so many directions. Is that a textile best?