What would Scottish independence mean for swimming? 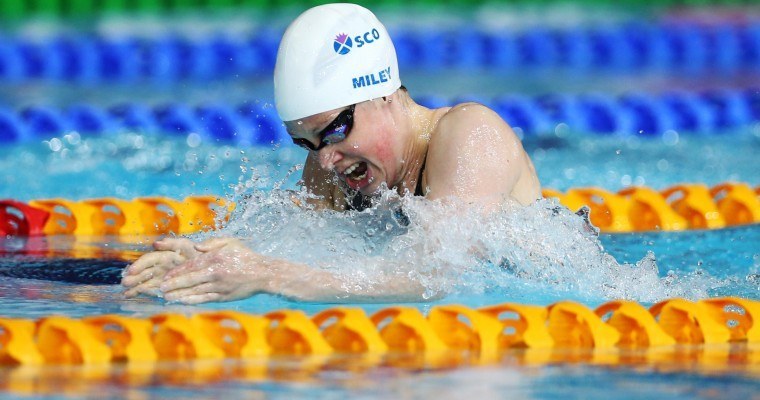 Scotland votes on a referendum today that would establish its independence from the United Kingdom. But outside of the political realm, what would this mean for Scottish Swimming? Archive photo via Ian MacNicol/Scottish Swimming

After ripping a statement-making 50m free victory of 20.40 for a new British national record yesterday, Ben Proud hit a lifetime best in the 50m fly.

The 2021 ISL season 3 final kicked off today and British swimmer Ben Proud made his presence known big-time here in Eindhoven.

Dave McNulty Recognized As BSCA Coach Of The Year

The British Swim Coaches Association (BSCA) recently awarded its annual honors for coaches both old and new who have made notable impacts on the sport.

Update: as of 10PM local time, the polls in Scotland have closed. The first results are expected out around 2AM Scottish time (9PM U.S. East Coast time), with continuing tallies throughout the night.

Scotland votes on a referendum today that would establish its independence from the United Kingdom. But outside of the political realm, what would this mean for Scottish Swimming? Here’s a few possible wrinkles:

1. Separate Olympic team – but could it be done in time? The obvious change for Olympic sports like swimming would be the possibility of a separate Scottish Olympic team if the referendum passes. We’ll discuss the impacts of split Olympic teams later, but the first big hurdle is whether Scotland could get all the pieces in place by Rio.

The current target for officially becoming independent, if the referendum passes, is March of 2016. That doesn’t leave much time for Scotland to jump through the necessary hoops to gain IOC (International Olympic Committee) recognition. A few of the big ones, according to The Guardian, are having 5 national sporting federations (not a huge hurdle, as federations like Scottish Swimming are already in place) and being formally admitted to the IOC. The latter one is more difficult, as The Guardian reports that typically, nations must fully join the United Nations to prove international recognition of their independence before they’ll be recognized by the IOC.

That leaves Scotland in a race to officialize their sporting federations, join the UN and gain IOC membership in just a few months, and that’s assuming there are no delays with the official independence date.

2. Would athletes choose team GBR anyway? If Scotland isn’t recognized as an IOC nation by Rio, Scottish athletes could compete independently under the general IOC banner, though that greatly lessens the prestige, not to mention the support athletes would receive, both monetarily otherwise. The other option for Scottish swimmers would be to remain under the Great Britain umbrella and continue as they were before.

It seems pretty likely most athletes would choose the second option, in order to take advantage of Great Britain’s team amenities and higher funding rather than essentially “swimming unattached” in Rio.

And that’s not the only time athletes may choose the status quo over a new venture:

3. Following the money: One of the bigger concerns with Scottish independence is how much of the UKSport budget would go to a newly-released Scotland. The majority of UKSport money is funded by the National Lottery, according to The Telegraph, but the whole system would have to be reworked if Scotland gains its independence.

That leaves Scottish sporting federations budgets completely up in the air. Even if Scotland is into the IOC in time for Rio, there’s speculation that many athletes would ‘follow the money’ and stay under the GBR banner if Scottish funding was lacking.

4. So what if they do split? If Great Britain and Scotland do eventually separate into distinct teams on the international level, the impact on swimming would be fairly noticeable.

Over all sports, the BBC reports that Scots made up 10% of Great Britain’s Olympic roster, but brought in 20% of the nation’s medals. In the pool, Scotland’s Michael Jamieson was one of two British medalists in the pool, taking silver in the 200 breast.

At the Commonwealth Games, Scotland won 10 medals in front of its home crowd, with the rest of the U.K. winning 35. Scottish breaststroker Ross Murdoch also won a pair of silvers at the European Championships for Great Britain.

Though the loss of Scottish athletes would hardly decimate British Swimming, it would definitely have an impact. A few of the bigger Team GBR names at risk to switch over to Scotland:

The loss of Scottish swimmers would also hurt UKSport’s chances to keep an important promise: The Guardian reports that to help earn its last batch of funding, UKSport set a national goal to become the first nation to increase its medal haul one cycle after hosting the Olympic Games. That goal would be on much shakier ground with a major part of the talent pool leaving the country’s banner.

The final wrinkle would be national high performance centers. Both of Great Britain’s swimming performance centers – the University of Bath and Longborough University – are in England, leaving Scotland without one of its own. That would likely be an early project for the newly-independent nation, but one of many projects it would have to tackle in the young stages of its national independence.

Would it be reasonable to think that, from an Olympic team point of view, that some Scottish swimmers might want independence as it would mean less competition for the 2 spots that they’re going for in their event? (Assuming Scotland does get all the above problems sorted and can compete in 2016)

A (possibly annoyingly) nerdly point:
Technically, “decimating” means eliminating 1/10th of a force, not reducing it TO 1/10th.

1. “Though the loss of Scottish athletes would hardly DECIMATE British Swimming…”

2. “Scots made up 10% of Great Britain’s Olympic roster, but brought in 20% of the nation’s medals. In the pool, Scotland’s Michael Jamieson was one of two British medalists in the pool, taking silver in the 200 breast… At the Commonwealth Games, Scotland won 10 medals in front of its home crowd, with the rest of the U.K. winning 35.”

Floppy – I like it! I’m a word guy myself, so I enjoy the grammar tangent. Looks like you’re technically correct, which is of course the best kind of correct 🙂

The original meaning was to kill every tenth man, but one of the modern definitions is “to reduce drastically especially in number” and that’s how it was used here. Perfectly acceptable and how the word is commonly used today.

More significantly, thanks JA, for explaining all the bureaucratic hurdles that we don’t all have time to figure out!

Scotland has always had a good swimming tradition & international heroes Nessie & David Wilkie to lead the way . I am sure they will do fine by themselves.

Even in the event of a No all funding in the UK will be impacted by the bribes the LibLabCon Amigos promised Scotland . Devo might be one man down but Devo Max will bring Scots (&swimmers ) about a 2,342 % funding increase ( or thereabouts) & nothing for Northern , Eastern & West England . This will lead to an English revolt .

With funding cuts happening for the GB team already, you would imagine Scotland’s ability to fund squads to send to the Olympics would be impaired. Looking like a model similar to Ireland, with very focussed single athlete funding? Main issue would be funding coaching. Scottish swimming money is essential for assisting clubs to get full time coaches,

If an athlete wins a medal the Olympic flag will be flown in their honor, and if they win gold, the Olympic hymn shall be played.

All this bureaucratic stuff can be pushed aside instantly . There is more than enough time ( in the event of yes) to formalise a Scots team . It is unlikely they would be able to qualify in teams competitions , but not impossible . Individuals should have few troubles.

It is the Great Britain team which wil be more affected. What flag , what anthem, what inclusivity/ exclusions to submit to the IOC .

It would be an economic distaster for Scotland to break from the UK, which would affect everyone in the country including swimmers. Luckily, I think the “no” vote will prevail.

I agree some big questions are going to be asked about ALL funding in the UK . Good luck .