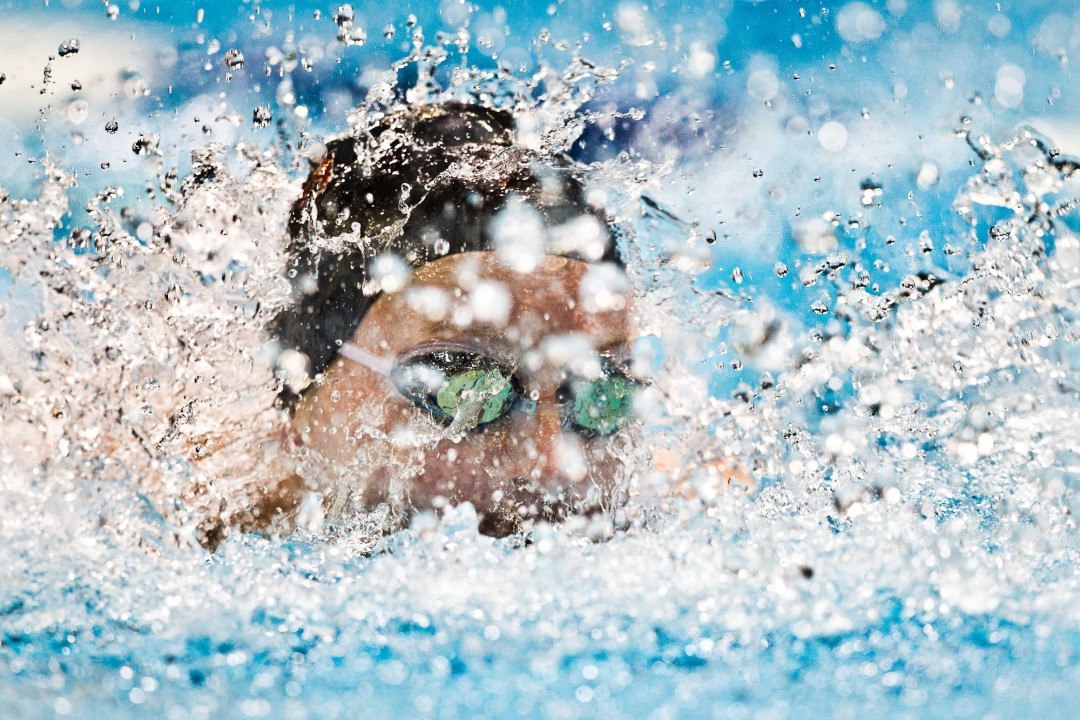 After the first night of the women's NESCAC championships, Williams leads by nearly 200 points, and looks to continue that way for the remainder of the meet. Current photo via Tim Binning/TheSwimPictures.com

The NESCAC Championships are held by gender rather than together. The event is also unusual in that the athletes contest 50s of events. Today marked the first day of swimming competition for the women’s side of the equation, and it is clear that Williams is ready to take control. After the first nine events of tonight’s final, the women of Williams lead by almost 200 points.

While Williams only came out on top in two of the events, it is clear that they have showed up with a purpose. They started off the night auspiciously with a victory in the 200 freestyle relay. The team of Faye Sultan, Lauren Jones, Breanna Nguyen and Sarah Thompson posted a 1:34.94 to win. In second was Connecticut (1:35.25), and Middlebury rounded out the top three with a 1:35.81. Last year it took a 1:35.61 to get invited for NCAAs.

In the 50 breaststroke – an unusual event for a championship meet – Jenny Hu and Jamie Hillas of Tufts and Middlebury tied for top honors by dropping time to post 29.10. That’s a new pool record; the old one was set by Hillas in prelims at 29.34. The third place finisher from Conn was Evie Mitchell at 29.98 – also the only other woman to get under the 30 second mark.

Women’s 50 fly went to Sarah Conklin of Amherst. Conklin is the defending NESCAC champion in the 50, 100 and 200 butterflies. This year she reset the pool record to a 25.11. Middlebury’s Megan Griffin was second (25.63) narrowly edging out Anna Epstein of Williams (25.71).

The first “real” event of the night was the 500 freestyle, which Thompson claimed easily. She posted a 4:57.51 to win by over two seconds. She was followed by Angela Slevin from Wesleyan, and the only other woman to go under five minutes. Slevin was a 4:59.87. The Ephs’ Lauren Jones was the third place finisher (5:00.39). In the B final, Valerie Urban of Conn dropped about six seconds to win her heat, putting up a 5:01.50 – a time which would have earned her fourth place in the A final.

Margaret Rosenbaum, a Hamilton senior, broke a pool record with her swim in the 50 backstroke. Rosenbaum is the NESCAC and Meet record holder with a 25.80; she was a little off with her victorious time of 26.04 tonight. Whitney Paine of Bates was second (26.58) with Williams’ Epstein taking third for the second time tonight (26.64).

Another pool record fell in the 50 freestyle. Conn senior Julia Pielock tied the time she swam in prelims to win the title, posting a 23.54 for the second time that day. Sultan was second for the Ephs (23.90) and Bates senior Gabrielle Sergi finished in third (24.05). The 2013 invite time was 23.61, so it might be a close thing for Pielock to qualify for the NCAA champs in the 50.

1 meter diving showcased three Ephs divers, but Amherst’s Lizzy Linsmayer spun, twisted and twirled her way to the top, finishing in first with 465.25 points, less than a point and a half in front of McKenzie Murdoch for Williams (464.60). Murdoch was joined by Michelle Higgins who took third on the boards (446.00), and Ari Ross who was fifth.

The 400 medley relay closed out the night. Amherst claimed the top spot,with the squad of Sabrina Lee, Hyde, Conklin and Lulu Belak. The quartet put together four independently strong legs to create something bigger than themselves – a victory to the tune of 3:47.99. In second place was Williams with a 3:48.79. Middlebury claimed third (3:53.07). The invited time in 2013 was a 3:52.37 – but relays this year have been incredibly fast, so it may be a close race.

Note Maggie Rosenbaum is a senior for Hamilton College. Every other athlete/relay combo had a team attribution, but it seems her affiliation slipped under the radar.