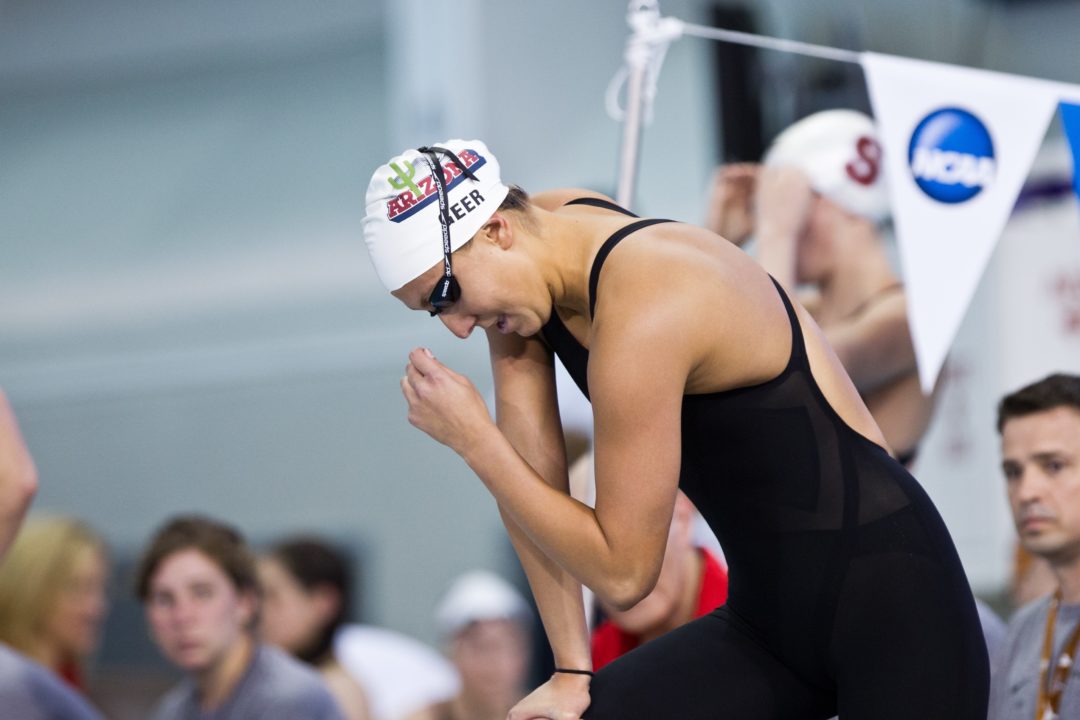 Arizona's Margo Geer, if she wins the 100 would become just the second NCAA champion in the event in school history. (Photo: Tim Binning/TheSwimPictures.com)

Analyzing the 50, 100, and 200 freestyle fields at the NCAA level is one of the more intriguing cross-sections within swimming; we have the drop-dead sprinters (who are better suited for the 50 and consider the 100/100’s of stroke to be a reach), the mid-distance specialists (who have enough speed to compete in the 100 but can struggle to get in front in the 50), and the longer event swimmers (who drop down to the 200 for their third individual event) all coming together.  Let’s take a closer look on the women’s side of things for the short freestyle events…

We saw a ton of talent move on from the women’s ranks in the sprint events, particularly in the 50 free; 8 of 16 scoring places were seniors last year, with only 2 of the top 8 returning this season.  Despite the mass exodus from the top spots on the podium, there are twice as many swimmers seeded under 22.00 (six) as there were going into 2012 or 2011 NCAA’s (three each year).  The heavy favorite (if that’s a thing in such a short race) is Margo Geer of Arizona.  The junior sprint specialist is the top seed at 21.78, and the lone returner who went under 22 seconds last year.

Geer will have plenty of challengers, including a pair of breakout freshmen (Faith Johnson from Tennessee and Chantal Van Landeghem of Georgia) and surprise sophomore Ivy Martin (Wisconsin).  After dropping serious chunks of time at their conference respective meets, it will be interesting to see if these three can knock off a few more tenths to win.  Seasoned vets Kasey Carlson (USC, seeded 5th) and Caroline Simmons (Tennessee, 2nd fastest returner, seeded 6th) have also already been under 22.00 this season.

There are a few others a little further down the psych sheet that we expect to compete in the sprint freestyle events.  After three years of doing the 200 free and 100 back on day 2 of NCAA’s (one of the more absurd doubles out there), Megan Romano has dropped the 100 backstroke in favor of the 50 freestyle, making her overall workload for the week much easier to handle.  Stanford sophomore Maddy Schaefer has filled the sprint freestyle void left by the graduation of four-year scorers Sam Woodward and Betsy Webb, and could challenge for a top spot in both the 50 and the 100 if she can handle the heavy relay load.  Schaefer’s teammate Andrea Murez doesn’t have quite as much speed (her specialty is the 200), but she has pieced together her most complete season top-to-bottom, putting up her fastest pre-NCAA times ever in the process.

Another piece to the puzzle (particularly in the 100 and 200 freestyles) are the returns of Olympians Allison Schmitt and Lauren Perdue.  Schmitt is back in a Georgia cap this championship season after redshirting the 2012 collegiate year to focus on long course preparations for the 2012 Olympics in London (we all know how that turned out).  The UGA senior has shown has more short course speed than ever this season, breaking 48 seconds in the individual 100 for the first time ever.  For those who don’t remember, Perdue’s final meet last year was the ACC Championships before having back surgery to have her back and ready for Olympic Trials (again, we all know how that turned out).  With a load of confidence and a full season of training, if she can better her times from 2011 NCAA’s (22.01, 48.24, 1:42.51), she’ll be near the top in each individual event.

There are a few other ladies sitting near the top of the psych sheet that are having fantastic seasons, but for the sake of brevity, here’s some quick predictions on each event.

– Geer is considered the favorite in the 50, and we like her winning this going away; she always comes up huge at NCAA’s.
– Anything Matt Kredich touches this year has turned to gold, and Caroline Simmons is a trusted NCAA swimmer.
– Schaefer rested less than her teammates and has a lot in the tank for NCAA’s.
– Romano and Perdue will show some speed, but not enough to get into the top three.
– Dave Salo has his squads (men and women) swimming at their highest levels since he took over the Trojans, and Carlson should bounce back after a disappointing individual 50 last year.
– Some fresh blood (Martin and Johnson) gets into the final heat.

Darkhorse(s): Kelsey Amundsen from the University of Texas had a huge morning swim last year, dropping almost a half second to finish in the top 16.  Look for the senior to make a move from her seed in the mid-40’s.  In addition, look for Madeline Locus from Georgia… she had a bad prelims swim last year at NCAA’s, but rebounded with a strong 200 free relay leadoff leg that would have placed her 11th overall.

– Tough call.  Geer had an incredible NCAA’s last year, and she’s on a whole other level in 2013.  Could be the closest race of the meet, but the touch goes to Geer.
– Romano had a disappointing trials, but turned it around into a ridiculous U.S. Open meet last August.  That being said, the meet of her life was last March, and she just barely touched out Geer in this event.
– Schmitt, Perdue, Murez, and Gendron close hard on the sprinters in the final 35 yards, but are too far behind going out.

Darkhorse(s): Sophomore Madeline Locus from Georgia is buried all the way down at 58th, but don’t let that fool you.  She finished 11th in this event last year, recording the 4th fastest time amongst returners in the process.  Caroline Simmons of Tennessee–seeded 27th–finished one spot behind Locus last year, and given the way Matt Kredich has the Volunteers swimming, she could sneak into the top 8.

Darkhorse(s): Cal teammates Caroline Piehl and Catherine Breed each scored for the Bears last year in this event as true freshman (13th and 14th, respectively).  They’re seeded in the mid-20’s… expect them to move up, despite Breed swimming through injury.  Don’t sleep on Jordan Mattern (the 16th seed) of Georgia, either.  She should have a boatload of confidence after being a part of Georgia’s American Record-setting 800 freestyle relay at SECs.

Don’t ever bet against Ivy Martin. We always say she has a little Seabiscuit in her when she races. She hates to lose!

Would love to see Martin challenge for 1st… always fun seeing someone new at the top. When I was going through this, I changed my mind on her about a dozen times (finishing everywhere between 2nd and 8th).

Lauren Perdue is great–she will not final in the 50; however, I think she’ll surprise people in the 100 (top 4)

Given Teri’s history with the Bears at NCAA’s, it wouldn’t surprise me to see her sneak into the top 8 in one of those events.