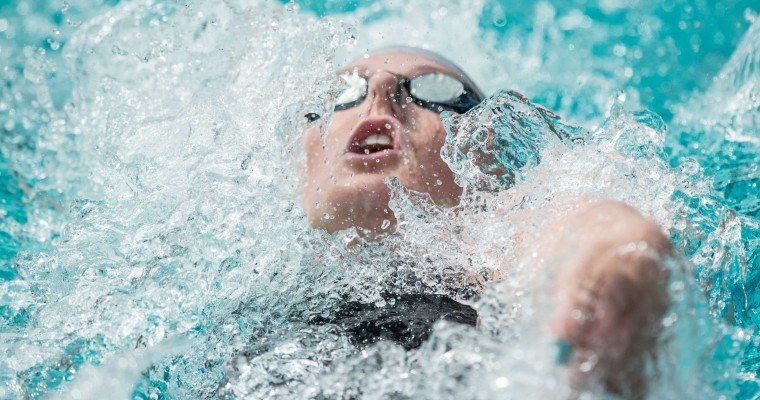 The 100m freestyle was won by Jasmine Alkhaldi in 56.82. Alkhaldi just narrowly out-touched 18-year-old Emma Chard who touched the wall in 56.92. Fourteen-year-old Taylor Ruck was able to hold on for the bronze medal, just narrowly missing out on improving her placement in the top three with a 56.94.

Daryl Turner was the winner of the men’s 100m freestyle, clocking in a time of 50.59 to take home the gold. William Van Dehy finished over a full second behind Turner in 51.84 and was followed by Ryan McCoy who was just seven one-hundredths behind him in 51.91.

The women’s 200m breaststroke had 16-year-old Robin Pinger coming home the winner after a drop of over four seconds from her prelim swim granted her the win in 2:35.86. Behind Pinger was Ashley Grijalva. Thirteen-year-old Zoe Bartel, the youngest of the top eight, touched in at 2:38.28 for the bronze.

John Bushman was the winner of the men’s 200m breaststroke, narrowly out-touching Matthew Anderson for the win. Anderson was ahead of Bushman at the 100m mark, but ultimately it was Bushman who got his hand on the wall first in 2:18.10 to Anderson’s 2:18.28.

Fifteen-year-old Cassidy Brennan took home the title in the women’s 200m backstroke, posting a 2:15.19 to beat the rest of the field. Lisa Bratton was the only swimmer who managed to stay with Brennan during the race, clocking in at 2:15.62 for the silver. Third place finisher Hannah Leach was over a second behind Bratton in 2:16.66.

Carter Griffin had an absolute domination over the rest of the field in the men’s 200m backstroke finishing almost five seconds ahead of second place swimmer Curtis Klein. Griffin swam a 1:59.39 making him the only swimmer to break the 2:00 barrier tonight.

Michelle Cefal came home strong in the women’s 200m fly to secure herself a victory. Cefal touched in at 2:15.04 to beat Erin Metzger-Seymour’s time of 2:15.62.

What do represent these sectional meets in USA?
Only a warm-up before US juniors and US nationals for the best?
And perhaps the biggest meet for the others?

bobo gigi – that’s about it. It’s the last stepping-stone meet for swimmers before Juniors. For some it’s the big taper meet, for some it’s just a last test.

There are a lot of kids who taper for these meets because it’s the last long course meet they will be able to swim for a while. The gap between Sectional time standards and Junior nats is huge so tapering who sectionals is what a lot of these kids have to do.

Thanks for the answer.

Mitch is there a link to the results available? 🙂